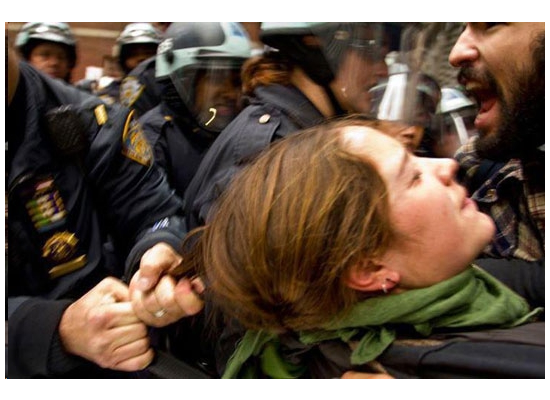 A national consortium of law school clinics has released the first in a planned series of reports examining the responses of law enforcement authorities to the protests of Occupy Wall Street. Titled “Suppressing Protest,” the report raises policy concerns and alleges violations of the rights of protestors. “Suppressing Protest” is the culmination of an eight-month-long study of the response in New York, along with comparative data from other U.S. cities.

Through reviews of thousands of news reports, hundreds of hours of video, and witness interviews as well as first-hand observation, the researchers chronicle what they say was aggressive, unnecessary and excessive police force against peaceful protesters, bystanders, legal observers, and journalists; violent late-night raids on peaceful encampments; arbitrary and selective rule enforcement and baseless arrests; and pervasive surveillance of peaceful political activity.

Sarah Knuckey, adjunct professor of law at the Global Justice Clinic and one of the report’s principal authors, said she witnessed one incident where a police officer kicked a protester in the face and then fled, and another in which officers yanked the broken collarbone of a protester. “These are just two of hundreds of examples we document in our report, demonstrating a pattern of abusive and unaccountable protest policing by the NYPD,” said Knuckey. The report urges independent, official review of these abuse allegations, investigation and prosecution of responsible officers, and the creation of new New York Police Department policing guidelines to protect against rights violations.

On July 25, Knuckey joined other legal experts to file a complaint with New York City authorities, the U.S. Department of Justice, and the United Nations over the alleged abusive policing of Occupy Wall Street protestors.