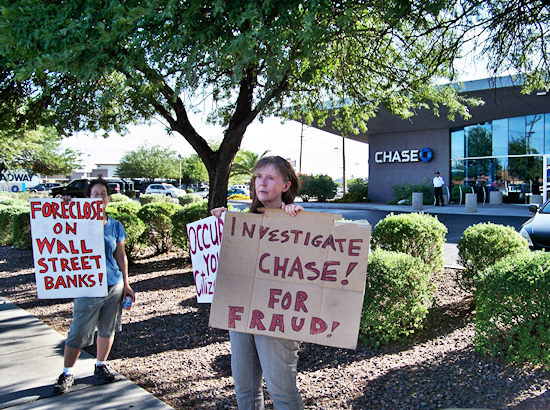 Despite the heat of late July afternoons, demonstrators from Occupy Tucson have been targetting Chase Bank in curbside rush-hour protests that remind hundreds of motorists about Chase’s continued risky financial activities. On July 18, protesters stood outside the Chase Bank at Congress and Stone, and a July 25 protest targeted the Chase Bank at Broadway and Wilmot. These demonstrations renew the efforts spearheaded last winter by Occupier Dick Kaiser,in which bank protests took place three times a week for two months in front of over 25 branches of Wells Fargo, Chase, and Bank of America.

Asked if she thought the summer protests were as effective as those she participated in last January and February, one demonstrator said, “Some passing drivers still honk appreciatively and give thumbs-up and peace signs. But many people seem to have forgotten the financial crisis and the bank bail-outs. We think the most recent banking scandal, in which JPMorgan Chase & Co. lost what is now estimated to be six billion dollars in a derivatives trade — not to mention the LIBOR scandal — should help us focus attention again on the big banks.”

This series of protests flows out of the proposal approved by consensus on June 30 by the Occupy Tucson General Assembly condemning “the continuing ineffectiveness of existing banking regulations to control the industry… [and calling] for the enactment of the ‘Return to Prudent Banking Act’ (H.R.1489 2011), which would fully reinstate the Glass-Steagall Act of 1933 and thereby divide commercial banks and investment banks into separate businesses, making it impossible for banks such as JPMorgan Chase to engage in such risky trading.” There will be another curbside protest on Wednesday, August 1, at 4:30 p.m. at the Chase Bank at Congress and Stone.

Addendum: Lee Stanfield passed out flyers at the July 25 protest. The text is below.

“Q: What is the difference between being ‘chased by a cheetah’ and being ‘cheated by Chase’?

“A: With a cheetah, there is a chance you may survive! *

“* In case you think this is an exaggeration, take a look at the actual court papers for 2 suits for wrongful foreclosure, against Chase Bank in Alabama.

“Once you read the allegations in the cases included in this post, I strongly suspect you will agree that the ‘ruining lives’ in the headline is not an exaggeration. And as important, these two cases, with very similar fact sets, also suggest that these abuses are not mere ‘mistakes.’ These are clearly well established practices that Chase can’t be bothered to clean up, since cleaning them up costs money and letting them continue is more profitable.”