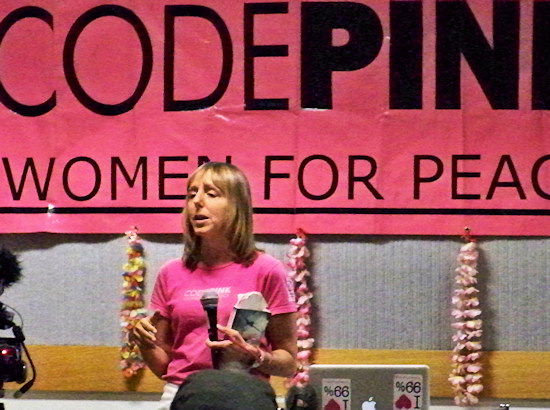 Code Pink co-founder Medea Benjamin, whose book “Drone Warfare: Killing by Remote Control” was published in May, was in Tucson last week to speak at a forum at the downtown public library about drones. Or at what was supposed to be a forum about drones: though invitations were sent to several local proponents of drones, including the Air Force, Raytheon Company, and State Senator Frank Antenori (a Raytheon employee), all politely declined. Among the reasons offered: a representative at Davis-Monthan Air Force Base stated that they did not have anybody available with sufficient expertise to discuss the issue, while a representative at Raytheon Company declined on the grounds that the company didn’t like to mix business and politics.

The event was therefore largely a presentation by Benjamin. Stating that she isn’t against drones per se, that they can for example be used effectively in very specialized circumstances such as spotting forest fires or in pinpointing illegal logging, Benjamin emphasized that drones are primarily being used for surveillance (including domestically) and killing. And in these contexts the use of drones is truly proliferating, as there were around 50 in the American arsenal at that time of 9/11, whereas there are now close to 10,000.

Her description of the drones as a kind of toy (albeit a deadly one) of the military-industrial complex was emphasized by the visual part of her presentation, which showed pictures of the pilots of the drones at work. Which is to say, they sit in offices in the United States, looking rather like they are at an Sony PlayStation, while ordering the remotely controlled drones to carry out deadly missile attacks in foreign countries such as Yemen, Pakistan and Afghanistan.

But if the drone pilots are isolated from the fields of drone action so too, according to Benjamin, are the American people. Asking the assembled crowd of some seventy people if any had ever seen a picture of a drone strike victim in the aftermath of an attack, not a single audience member raised their hand. Isolation from the reality of drone strikes, and only hearing reports about their precise and surgical nature, helps to explain that nearly 8 out of 10 Americans support drones for the purposes of killing suspected terrorists and insurgents. Benjamin contrasted this with popular opinion in a country very familiar with drones, Pakistan, where over 90 percent of the population opposes their use and the Pakistani parliament, no friend of the Taliban or Al-Qaeda (the primary targets of the drone attacks), have voted unanimously to condemn the drone strikes. 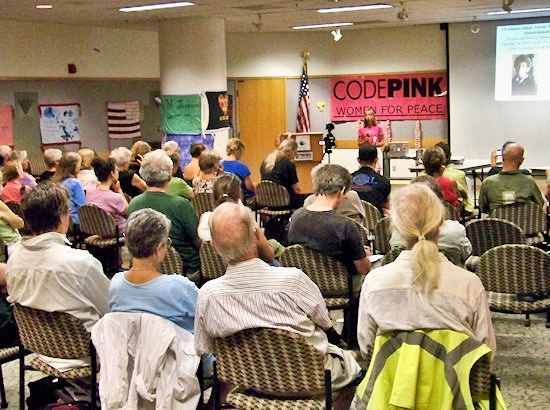 For this reporter, however, the most striking description that Benjamin gave during her presentation was of life in those areas where the drones are most active. The sound of their engines flying off in the distance can be heard constantly, giving a constant reminder to all of the residents of the villages in the affected areas — from children to the very old — that a deadly attack can come at any moment. This image of a population being constantly on edge in this way reminded me of descriptions of the psychological terror (even beyond the physical one) that the German V-1 Flying Bomb had on the residents of England as the approaching buzzing sound of its engine could be heard by all around until the sound suddenly cut off, signaling that it would soon hit its target with a terrific and deadly explosion. Of course, the residents of these villages don’t even have that much warning: since the Hellfire missiles the attack drones fire go faster than the speed of sound, the deadly missile strikes occur instantaneously.

Benjamin concluded her talk by stating that the most effective way to oppose drones at this point in time was to have communities pass resolutions stating that they were drone-free zones, much as many municipalities declared themselves to be nuclear-free zones in the 1980s.