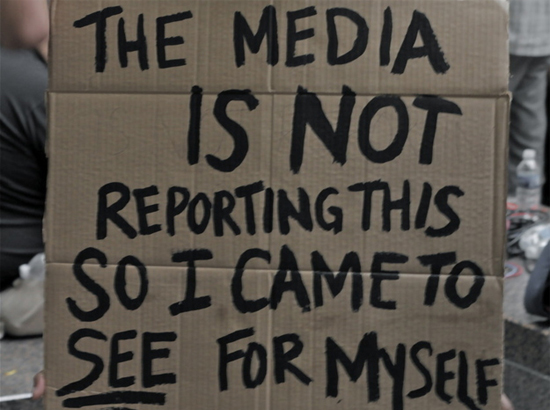 An autonomous affinity group of local activists working in solidarity with Occupy Wall Street and Occupy Tucson announce today the launch of the Occupied Tucson Citizen, which will join the ranks of such Occupy newspapers as The Occupied Los Angeles Times, The Boston Occupier, The Occupied Chicago Tribune and The Occupied Wall Street Journal.

Organizers say the mainstream media in Tucson and nationwide fails to represent the concerns of the Occupy movement, ignoring successes and reveling in setbacks. They manufacture failure where none exists, and they are unwilling or unable to explore the nuances of this complex global movement.

The inaugural print issue is planned for June 2012. This new publication, envisioned as a tabloid-style quarterly, aims to record the history of this movement as it unfolds in Tucson and southern Arizona; to establish a venue for thoughtful citizen conversation and debate; to offer intelligent analysis of current events through the lens of the 99 percent; to publish creative writing and visual art by local writers and artists; and to criticize the movement when necessary.

The Occupied Tucson Citizen marks a symbolic resurrection, a reclaiming, a re-occupation of Tucson’s oldest daily newspaper. The name suggests we ask ourselves what it means to be a citizen, especially of a land taken at gunpoint from its original inhabitants.

The Occupied Tucson Citizen heralds the arrival of the American Spring to Tucson. Welcome to Occupy 2.0!

What’s the name about?

The Occupied Tucson Citizen is meant not as a reaction to the current online incarnation of its namesake (which in fact has been one of the few balanced sources of information for the local Occupy movement) but in part a lament and protest over yet another daily print newspaper’s demise at the hands of corporate interests. It’s also an acknowledgement that with the death of the print Citizen in 2009, Tucson lost the only daily paper reporting an alternate view to the Arizona Daily Star, which has repeatedly and egregiously ignored and/or misreported stories about Occupy Tucson. The corporate owner of the Star, Lee Enterprises, publishes 54 daily papers in 23 states. The company filed for Chapter 11 bankruptcy in 2011.

The Occupied Tucson Citizen describes a symbolic resurrection, a reclaiming, a re-occupation of that which was lost. And the name also demands that we take another look at the word citizen, to ask ourselves what it means to be a citizen, especially of a land taken at gunpoint from its original inhabitants. What does it mean to be a citizen of occupied land? What does it mean to participate in our democracy? What is our responsibility to this place?

How is this thing structured?

The Occupied Tucson Citizen is an autonomous affinity group of the Occupy movement. We operate under the values of consensus decision-making and horizontal structure. Our membership is closed but our meetings are open. By closed membership, we mean that not everyone is invited to participate in decision-making, including issues of editorial content. This role is reserved for the members of the editorial board. By open meetings, we mean that anyone is invited to attend, watch and participate in the discussion when appropriate, which is almost always. We have been meeting Sundays at 10:30 at Café Passe on 4th Avenue. All are warmly welcomed.

Who are you people?

We are a group of seven activists, each of us identifying as a member of Occupy Tucson. We met on the frontlines; we worked together at Armory Park and Veinte de Agosto and De Anza. We have stood on street corners together and debated one another at General Assemblies and exchanged countless emails. We have built trust and respect for one another and are efficient and action-oriented, individually and as a group.

What is your relationship to Occupy Tucson?

As an independent affinity group, The Occupied Tucson Citizen constitutes its own decision-making body and thus neither benefits from nor is beholden to the Occupy Tucson General Assembly or its Coordinating Council. Many of us participate actively in those bodies as individual members of Occupy Tucson. The Occupied Tucson Citizen keeps itself separate from the OT General Assembly in part for reasons of journalistic integrity: we see one of our roles as being a watchdog for the movement. We are an experiment in autonomy, taking independent action to advance the interests of the 99 percent but concerned above all with the continued robustness and efficacy of Occupy Tucson and the global Occupy movement.

How do I become one of these fierce & trusted colleagues?

We are looking for others to join us. New editorial board members are invited by consensus of the group. Specifically we need people with expertise in journalism, writing and editing. If you’re interested, come to a meeting and begin doing the work. Just show up next Sunday morning and help us produce The Occupied Tucson Citizen. If it seems like a match for all concerned, sooner or later we’ll invite you to join the decision-making editorial board. Welcome!