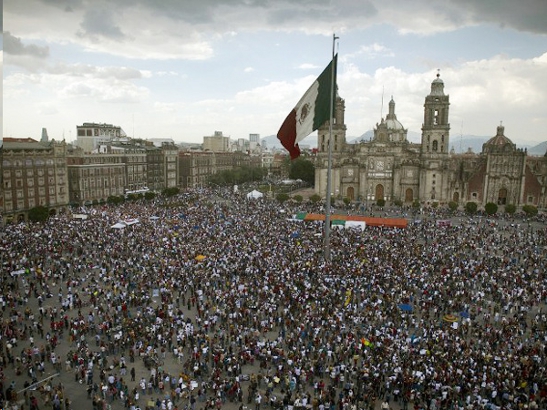 Thoughts on the Presidential Election

There have been two major Mexican earthquakes in recent years, the telluric one that killed thousands of people in 1985 and the electoral one July 1 that didn’t kill anyone but made a lot of people mad.

Emerging details of the voting reveal manipulations of Byzantine complexity and vast national implications. The legal challenges and street protests against the nominal winner Enrique Peña Nieto will last at least another month. After that, no one can say.

During the 71 years of its one-party rule, which ended in 2000, Peña Nieto’s Institutional Revolutionary Party (PRI) and the government were essentially the same thing. The party’s candidate was by default the next president and the campaign was not so much a plea for votes as product placement for the benefit of voters who might have never heard of him. The party’s ideology is not important; the PRI just is.

Fraud was prevalent but usually unnecessary in those days of token opposition though it produced a rich cynic’s catalog of fraud applications: the carrusel (the carousel — voting early and often), the ratón loco (crazy mouse — the runaround given to unwanted voters in search of a ballot), carro completo (the full car – the PRI wins everything) and the taco (a handy roll of pre-marked ballots). [1]

This time the manipulation was big and brutal but within the normal range of probability given that the political system had 24 years to adjust to elections, which since 1988, have been seriously contested by parties actually capable of winning.

This election is the first one to be tested under the electoral code put in place in 1990 by the ruling PRI itself. Second-place candidate Andrés Manuel López Obrador (AMLO), who lost to President Felipe Calderon of the conservative National Action Party (PAN) in the more-than-likely fraudulent 2006 election, is the candidate of a center-left coalition anchored by his Party of the Democratic Revolution (PRD). AMLO has demanded invalidation of the election, but the Federal Electoral Institute (IFE) has already unofficially rejected every point in the complaint even though final authority to rule on it rests with judges of the Electoral Tribunal (TEPF). A ruling is due by September 6.

In a July 2 news conference, AMLO said he had evidence that the PRI distributed 260,000 such bank cards nationwide at a cost of 74 million dollars. [2]

Other evidence suggests that the PRI exceeded spending limits during the first month of the campaign. Overall, Peña Nieto’s 90-day campaign may have cost 340 million dollars – more than 10 times the limit. [3]

Aside from the sheer magnitude of these allegations there was a puzzling laxity by the PRI in covering its tracks. Whether this was due to careless arrogance or the result of a party sleepwalking through the 12 years it was out of power, the PRI has yet to offer a credible explanation for how millions of pesos of unknown provenance ended up in the hands of voters.

Speculation is that some of it was narco money and some was money transferred from state coffers by priista governors. AMLO’s coalition produced a bank statement and a recorded phone call purportedly showing that Peña Nieto’s campaign manager had spent State of Mexico public funds on the campaign. [4]

Election authorities seemed slow to respond to the election-fraud evidence, but radio journalist Carmen Aristegui and her staff took just two days to track down some of the phantom companies that bought bank cards and to uncover suspicious links between them and members of Peña Nieto’s campaign. Aristegui reported that the headquarters of one such company was located in a dental office and another had a non-existent address. [5]

Within days of the election crowds of shoppers began trying to redeem their gift cards for merchandise at Soriana grocery stores. Many of them readily admitted to reporters that they had sold their votes to PRI party workers. Some were angry that they had done their part but had received inactivated cards or cards worth only a few pesos. Some Soriana shoppers complained that they had not gotten as much money for their votes as others. “So, my vote is worth less?” asked a disgruntled shopper. [6]

Whatever the outcome in this post-election struggle, Mexico is experiencing an electoral earthquake likely to have political consequences that bring to mind the 1985 earthquake in Mexico City.

When the tremor struck on September 19, President Miguel de la Madrid’s government was nowhere to be seen except in some places guarding favored businesses from looters. The calamity that killed as many as 40,000 people exposed Mexico as a country with a political system but not much of a government. During the first days after the tremor, ordinary citizens took control to organize rescue operations.

Civic action in the face of government impotence contributed to the emergence of a popular movement that culminated in a new political alignment led by the National Democratic Front, which ran Cuauhtémoc Cárdenas against Carlos Salinas de Gortari of the PRI in the 1988 election. Early returns showed Cárdenas ahead of Salinas until the government’s computer system mysteriously failed. A PRI official is supposed to have uttered the now immortal line: “se cayó el sistema” (the system crashed). De la Madrid later admitted that he allowed the results to be rigged to keep the PRI in power. As a party operative put it to him, ‘It is a tradition that we cannot break without causing great alarm among the citizens.” [8]

After that, Salinas never really established his legitimacy. PAN leaders began making power-sharing deals with Salinas in exchange for their support and were rewarded with control over a number of states. Some expect that if Peña Nieto takes office under mounting popular and political constraints he will be forced to govern through consensus. While there has been consensus ever since the 1988 election it has been confined to the PRI-PAN two-backed monster.

As the PRI drifted away from the revolutionary principles implied in its name, much of the electorate drifted away from the PRI, a tendency accelerated by the Salinas disaster. There was the Zapatista indigenous revolt in Chiapas in 1994, an uprising against just about everything including the North American Free Trade Agreement (NAFTA), which Salinas signed the same year. And there was the assassination of the popular Donaldo Colosio, Salinas’ choice to succeed him in the 1994 election. To many Mexicans, it looked like a plot hatched high up in the PRI to shut down Colosio’s populist campaign and his talk of separating the party from the government. Several other political assassinations followed, including that of the PRI’s secretary general, for which the president brother went to prison.

In 2000, out of ideas and facing an election it could not easily fix, the PRI allowed PAN candidate Vicente Fox’s victory to stand. The 2000-2012 experiment in PAN governance reached its nadir with Calderon’s exhausted presidency.

The PRI was generally expected to win this year because Caldron failed at everything and now leaves the nation with 60,000 dead and thousands disappeared in his ill-advised narco war. Calderon’s neo-liberal economy is doing fine only if you don’t look at it, and much of the population is afraid to go out at night.

In the weeks following the July 1 election, Calderon has taken to dedicating roads and bridges. He no longer claims that most of the dead in his narco war must be narcos or they wouldn’t be dead.

Combining what he considers his two great accomplishments, Calderon recently dedicated a new highway in Tijuana while praising himself for making Mexico a safer place.[9] His answer to the endless assassinations of journalists filing inconvenient reports on the narco war is that they should wear bullet-proof vests. [10]

Both he and Fox threw their support to Peña Nieto when only preliminary election results had been announced — Fox openly and Calderon through various gestures culminating in a probably illegal meeting with Peña Nieto to plan the transition for the not yet president-elect. It was the PAN’s most declaratory act legitimizing the election and signaling the continuance of unitary PRI-PAN rule.

Josefina Vázquez Mota, the PAN’s presidential candidate, was left in an embarrassing exercise in self-mockery. She was not Calderon’s choice and she could not run on his presidential misadventures. For her agreeable vacuity, political analyst Julio Hernández dubbed her “lady of the perpetual smile.” [11] She was an unnecessary presence in the campaign after Peña Nieto was groomed to block the leftist forces for the fourth time.

Poet and activist Javier Sicilia thinks a re-run of the election would at least set a precedent of “minimum dignity and confidence,” but politically, it would be just as disgraceful as the first one. “Without iron-clad controls that include severe criminal sanctions against coerced votes and the collection of money of doubtful origin…annulment would be of little use and the moral grandeur of annulment would turn into … a joke.”

The electoral tremor produced its own popular movement that grew out of a confrontation in May between Peña Nieto and students at a private university in Mexico City, where he was jeered and heckled him off campus. (He inadvisedly took brief refuge in a bathroom.) When the campaign claimed the students were stooges of the left, 131 of them appeared in an iconic YouTube video displaying their student ID’s. The Yo Soy #132 (I am #132) movement was launched and has been building a loose organization ever since, joined by groups with long-standing grievances against the system.

Some electoral authorities seem to believe that vote buying is not exactly illegal and anyway was not enough to account for Peña Nieto’s three-million vote margin. But alas, given the broad-daylight mugging of the popular will in this election it’s doubtful that anyone can ever know what the real numbers were.

The mangled corpse of the 1988 election went missing in 1991 when the ballots were officially burned by order of the Mexican Congress.