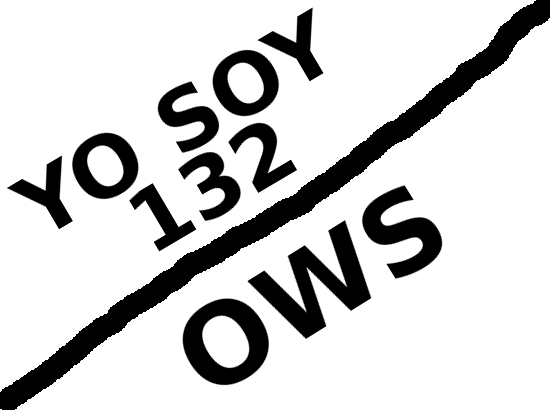 In less than three months, the Mexican youth movement Yo Soy 132 (I am 132) has undergone a remarkable evolution. Beginning as a protest against Institutional Revolutionary Party presidential candidate Enrique Peña Nieto at the privately-run Ibero-American University in Mexico City on May 11, the movement has since grown by leaps and bounds.

From the get-go, the 132 Movement linked issues—protesting the Televisa network’s long-running promotion of Peña Nieto and questioning the former governor and now virtual president-elect’s role in the repression of protestors at San Salvador Atenco in 2006, an event in which dozens of female detainees were raped or sexually molested.

Lighting up the social networks, the 132 Movement soon appeared in numerous Mexican cities and even small towns. And it has gone international.

According to movement activists, more than 50 groups operating under the 132 banner have arisen in other parts of North America, Europe, South America, Asia, and Australia. The movement even has a presence in China. Almost everywhere where Mexico’s far-flung diaspora has reached, so has the 132 Movement. It’s virtually guaranteed that when Peña Nieto travels to many places in the world today he will likely encounter a demonstration.

At a Mexico City press conference, 132er Yarima Merchan Rojas said the most active branches of the group abroad include the ones in London, Sussex, Barcelona, Madrid, New York, Chicago, Washington, D.C., Berkeley, and Quebec.

According to another movement activist, Samantha Herreiras, the stirrings of the international movement came early on when young Mexicans connected to international academic institutions linked up with “some foreigners who came to us to give their expressions of solidarity.”

In a July 27 manifesto, the 132 Movement defined itself as a non-partisan, autonomous, anti-neoliberal and peaceful force. The 132ers advocate for a free, scientific, humanistic, high-quality, and diverse educational system that is “guaranteed by the state at all levels as a constitutional obligation.”

In the U.S., where about 10 percent of the Mexican people reside, the 132 Movement has joined with Occupy Wall Street to support the campaign dubbed Two Countries, One Voice. The new campaign’s immediate target? Mexican magnate Carlos Slim, named the world’s richest man by Forbes magazine.

On Tuesday, August 7, Occupy Wall Street and the 132 Movement plan to occupy Saks Fifth Avenue, the famous store in which Slim has a good chunk of ownership. A slogan of the upcoming action is directed against the “1 percent of the 1 percent.”

A website under the Two Countries, One Voice name blasts Slim for his companies’ gouging of Mexican consumers in the telecommunications realm, a practice that is “crippling the nation’s economic development,” according to the author(s).

Slim’s companies, including Telmex and Telcel, effectively control the land line and cell phone markets in Mexico, and the Organization for Cooperation and Economic Development has identified Mexico as among the world’s most costly places to communicate.

Besides Occupy Wall Street and the 132 Movement, the Two Countries, One Voice campaign is endorsed by several New York-area Latino politicians as well as numerous community leaders representing immigrant and Latino business groups in different parts of the U.S.

Without offering further proof, Slim’s spokespersons have dismissed the growing U.S. campaign as the antics of paid protestors.

The 132 Movement’s protest against Slim was anticipated by Mexican political analyst Victor M. Toledo, who recently wrote that “132 should convert into the 99 percent; that’s to say, turn to building and strengthening citizen power.”

A veteran of the revolutionary winds of 1968, Toledo compared the socio-economic landscape confronting today’s youthful activists with the world of their counterparts from a previous generation. According to Toledo:

In Mexico, Toledo affirmed, all the main economic sectors are in the hands of a few, including banking, telecommunications, cement, tortillas, bread, and beverages. “The result is that we Mexicans pay higher prices for goods and services than in other parts of the world, while wages are at low to very low levels,” he added.

The continued anti-July 1 election protests, diverse forms of activism and coalition-forming by the 132 Movement are providing plenty of grist for press commentators, especially in the left-leaning Mexico City daily La Jornada. Columnist Gustavo Gordillo recently wrote that the 1968 student movement helped ignite popular movements beyond the university campus, and that the contemporary movement could play a similar role.

A less recognized but perhaps just as profound impact of the ’68 movement was seen in the popular cultural consciousness, with a literary explosion following the political one, Gordillo wrote. The 132 Movement, he argued, “surely will have similar consequences.”