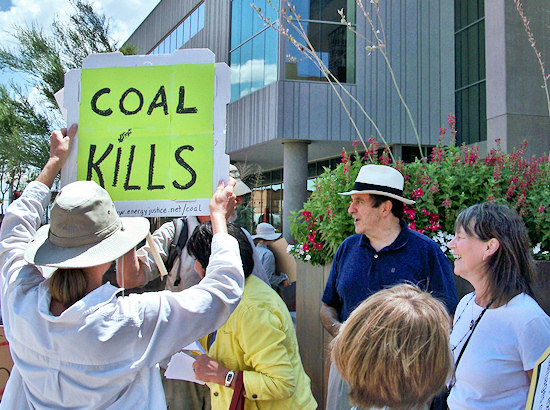 On August 9, more than a dozen activists from TUCAN (Tucson Climate Action Network) held a press conference and distributed leaflets in front of Tucson Electric Power’s downtown headquarters to demand that TEP stop burning coal at its Sundt Generating Station. The TUCAN activists carried signs that read “Coal Kills,” “There is no such thing as clean coal,” and “No dirty coal in Tucson.” They also added their signatures to a letter to TEP that pointed out the health hazards related to power plant emissions and the fact that burning coal contributes greatly to global warming.

Attempts to deliver the letter, however, were not successful. According to Vince Pawlowski, one of the organizers of the event, TEP had first refused to confirm the mailing address of CEO Paul J. Bonavia; and then when Pawlowski tried to hand-deliver the letter he was told by the building’s security guards that the building was closed and he wouldn’t be allowed to enter. This in spite of the fact that, during the course of this noontime weekday event, people were regularly coming and going from the building.

But the TUCAN activists state that they will not be deterred. Further actions, according to another event organizer, Jim Driscoll, are planned for the coming months, including a “die-in” in front of the TEP building and blocking the railroad tracks used by trains bringing the coal into the Sundt Generating Station.

According to the Clean Air Task Force, every year during which TEP burns coal at its Sundt plant, the emissions kill an estimated four people in Tucson and surrounding areas and cost the community $27 million in health and economic damages. The letter signed at the August 9 event cited these estimates and also called upon TEP to reduce its CO2 emissions as rapidly as possible to help achieve the recommended target of 350 parts per million of atmospheric CO2 by the year 2050. The letter further demanded that TEP cease using coal at the Sundt plant on Irvington; pledge not to burn coal and to remove the current supply at the plant; develop a plan to achieve 80% renewable energy sources for its system by 2050; and present the plan to the Mayor and Council and Tucson community by December 31 of this year. “We urge you to move beyond a vision of maximizing profit to one of assuring a livable future for our children,” the letter concluded.