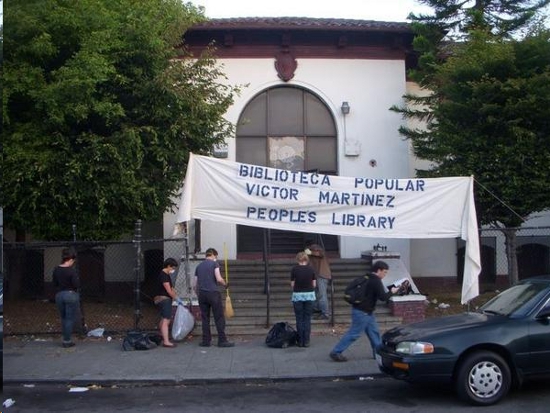 On Monday a group of Oakland activists occupied a former library branch building that has long been closed and reopened it. The building in question, which the occupiers named the Victor Martinez Community Library, was originally a part of a Carnegie Foundation endowment of four libraries given to the city of Oakland between 1916 and 1918. Oakland’s librarian at the time, Charles S. Greene, believed that the city’s people would benefit most from libraries placed within their communities.
Despite this vision, the building was one of seven branch casualties of budget cuts in the late seventies, severing vital library life-lines in poor and working communities. Since then, the “Latin American Branch” library building has mostly sat empty, despite the fact that the next nearest library is miles away, and increasingly difficult to access in a city with an increasingly expensive transit system.
On Monday morning, a group of activists opened this building again for use as a library. Inside was the modest seed for a library and community center—hundreds of books donated by people who envision the rebirth of local, community-owned libraries and social and political centers throughout Oakland. The building was named after the recently deceased author, Victor Martinez, who overcame a young life of hard agricultural work to become a successful writer in the Bay Area. His semi-autobiographical novel, Parrot in the Oven, has become a seminal work of the Latino experience. Martinez died last year at 56 of an illness caused by his work in the fields.
However, late Monday evening, after Occupy Oakland hosted a community potluck and poetry/spoken word reading, dozens of Oakland police arrived on scene, confiscated donated books, looked the gates with zip-ties, and boarded up the building.
Community members are meeting to discuss future plans.
— adapted from the Occupy Wall Street webpage news archive  (http://occupywallst.org/article/oakland-liberates-shuttered-library/)