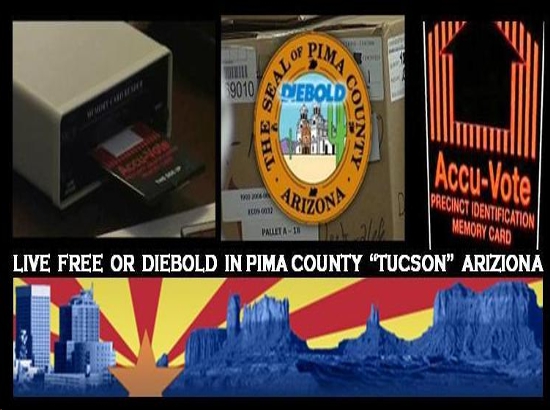 Most of you no doubt remember the controversy surrounding the implementation of electronic voting terminals. Most famously, Diebold voting machines are believed by many to have helped fix the 2004 presidential election in Ohio. For years elements in the Democratic party took a lead in exposing the security problems with these machines, but since the Democratic party stepped back from this fight the issue has irresistibly made its way down the memory hole1. Most of us have heard little concerning the controversy on this very issue in our own backyard. This is ironic as there is much hype in Arizona about voter fraud—in particular that illegal immigrants are being used to swing elections—but vanishingly little about election fraud (and, incidentally, there is no evidence of any widespread voter fraud2).

All too commonly our fear is directed downwards towards the disenfranchised trying to vote illegally, and not upwards towards powerholders trying to decide elections illegally. And for good reason: there are far more serious repercussions for those who challenge powerholders. John Brakey has been working on this issue for over half a decade, and he emphasized this point when he came to meet up with the editors of the Occupied Tucson Citizen: otherwise outspoken people are feeling the pressure to shut up when it comes to the claim that the Pima County Election Division engaged in a control fraud (i.e., a fraud directed by the top administrators) to pass the 2006 Regional Transportation Authority bill (RTA).

Bill Risner has been pleading with Pima County and Arizona courts since that time to hear this case. In 2009, the Pima County court said it was out of its jurisdiction. In late 2010, the Arizona appellate court overruled that opinion; and the Arizona Supreme Court declined Pima County’s contest of that overruling by mid 2011. The case came back to court by late 2011 and the first hearing in front of Judge Kyle Bryson was on January 12, 2012. On Monday, August 13 2012, it finally made its way back to Pima County, and I suggest watching the video of this hearing if you haven’t already.

At that Monday hearing, Pima County’s lawyer Ronna Fickbohm made the startling argument, in response to Bill Risner’s claim that an electoral fraud occurred in 2006 perpetuated by the same administrators of the Pima County Election Division who are managing it today (and with particular emphasis on Chuck Huckleberry), that changed procedures have been “carefully”3 ignored in the service of focusing on unchanged “employees”. This is darkly humorous: as if new procedures designed by control frauds aren’t always going to ease the perpetuation of fraud when that’s precisely the imperative of control frauds. Fickbohm doesn’t want to understand Risner’s argument, and repeatedly engages a strawman argument instead. It’s not just Fickbohm: most of us are disinclined to believe that well respected people are lying.

Let me give another example of a strawman argument by Fickbohm. She claims that quotes by Pima County attorney Chris Straub from the 2008 hearing were taken out of context4 by Risner to imply that it was a confession by Pima County “that the procedures that have been approved by the Secretary of State [and the Arizona legislature] constitute an insecure system.” 5 But that’s not Risner’s argument at all. The procedures approved by the Secretary of State do not include the actual programming of the Diebold system, and indeed Straub’s comments6 about the insecurity of the system only have to do with the actual programming itself, not the procedures taken by the Election Division. Risner’s argument is precisely that there is no way to secure the voter data from a control fraud run from inside the Pima County Election Division without auditing (and not merely counting) the paper ballots themselves as long as we use the same Diebold system.

Risner’s whole case concerns the ability of the Pima County Election Division to cheat with impunity in future elections, and Fichbohm responds by arguing to Judge Bryson that the court does not have jurisdiction in the bureaucratic matter of electoral procedures. She claims Risner has not cited law when he has cited the Arizona Constitution! Risner’s argument is so big, and so fundamental, and that’s precisely why it’s so easy to ignore.

The point is that the Diebold machines are easy to manipulate. The same tools that can hack voter information can also change the log itself to cover their tracks. But if the Pima County Election Division is compromised, then there will be no way of finding out without auditing (and not merely counting7) the physical copies of votes.

Whether or not the RTA of 2006 was stolen, whether or not the Pima County Election Division has ever engaged in cheating, if ever in the future the Pima County Election Division should be dominated by persons hostile to democracy and with an alternative agenda, the status quo will enable such persons to defraud the people of Pima County from within the Election Division. This is so because of how easy it is for anyone with access to hack the machine and cover their tracks. Is that an acceptable risk? Are the efficiencies delivered by the Diebold technology worth the price that comes with that risk? Is it acceptable that, as people come to learn about the inherent internal insecurity of our modern electoral system, all election results will be increasingly stained with questions and doubts? If our republic is to have any value at all as a republic, the answer to all three questions is no.

1 George Orwell used the term “memory hole” as a euphemism for the destruction of documents in the service of propaganda, I use it more broadly to describe not only the media’s tendency to ignore information that doesn’t fit into the competing paradigms of propaganda (i.e., conservative vs. liberal), but as a general human tendency to do this without the intervention of authorities: because that which doesn’t fit our preconceived notions of how the world works is often desirably forgotten as soon as possible and never mentioned again.

3 “They don’t disagree that Pima County has made significant changes to its election procedures after the May 2006 special election. You’ll notice in arguing this motion for a new trial, in general they were very careful to say, ‘Well the same employees are all there.’ They don’t say to you all the same procedures are in place.” Ronna Fickbohm at 25:18

4 “Once again we have Mr. Straub’s out-of-context statements paraded in front of [the Court] for effect.” Ronna Fickbohm at 20:00

6 “There is no question that there are significant flaws in the GEMS software from a security standpoint. […] The databases themselves are not secured. We know that and we agree that they can be altered using Microsoft Access. We know that these databases are essential for programming the memory cards of the machines. […] Because it can be easily manipulated, the bottom line in this whole thing is we’re only going to catch stupid people, all right, because one could also alter the audit logs.” Chris Straub, Opening Statement, Trial Transcript 39: 21 – 24

7 This is because it is relatively simple for a hack to keep track of the total number of votes, a full paper audit would require a review of the content of the votes.