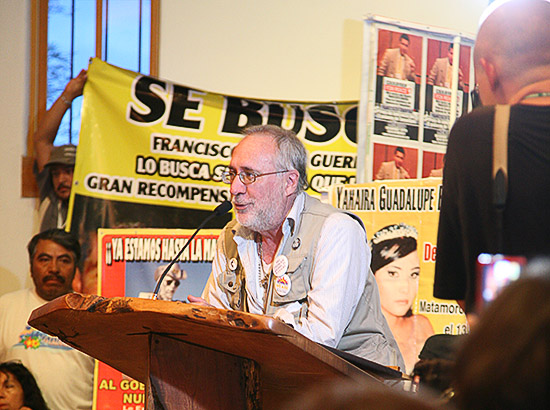 After his 24-year-old son was murdered by drug traffickers, Javier Sicilia, one of Mexico’s best-known poets, founded the Movement for Peace with Justice and Dignity to urge an end to drug violence. Over the past six years an estimated 60,000 people have been killed in drug violence in Mexico; 10,000 people have been disappeared and over 160,000 displaced. As a response to these stunning numbers, Sicilia and others in the Movement for Peace have formed a caravan with the following as two of its stated goals: “To shine a light on the crisis of Drug War violence, impunity and human rights atrocities that are rending Mexico’s social fabric; To make the connections between the impacts of the Drug War in Mexico (violence, deaths and rise of organized crime) and in the U.S. (criminalization, incarceration, and life-long marginalization — disproportionately affecting African-American and Latino communities).” The caravan, traveling by bus, began its journey at the Tijuana-San Diego border on August 12 and made a stop in Tucson on August 16. There was an afternoon press conference at Veinte de Agosto Park at which caravan participants spoke out about their loved ones who had been killed or were missing. There was also an evening event at Southside Presbyterian Church, and the next morning the caravan continued on its way and is scheduled to arrive in Washington, D.C. in September. Tucson writer and photographer Clark Lohr took these pictures during the Caravan’s visit to Tucson. You can follow the caravan’s progress at www.caravanforpeace.org—Ed