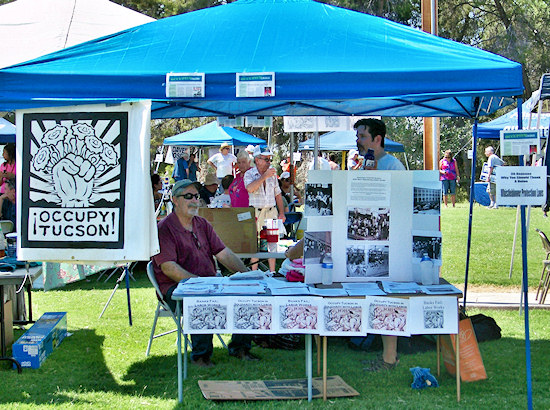 In Arizona early September is not the best time to have a holiday that demands an outdoor, daytime celebration. But such is life, and so every year on Labor Day organized labor uses its skills and resources to put on an event that celebrates working people and the trade union movement. And they do succeed in this: despite the heat, every year large numbers of union members, their families, activists from various non-union organizations (including Occupy Tucson this year), and politicians come down to the Reid Park Bandshell and make a day out of it. This year was no exception, and so the annual “union Olympics” (i.e., tug of war contests and the like between the various unions) unfolded, children swung bats at piñatas being raised and lowered by an industrial crane, a mariachi band played and an Aztec dancing troupe danced. All the while union members and officials discussed the upcoming elections while one after the other Democratic Party politician got up and spoke about the importance of unions and how they supported the unions. And here is where the event becomes a bit more ambiguous. Certainly there is little doubt that many of the politicians in the liberal bastion that is Pima County genuinely support unions (e.g., Raul Grijalva, Richard Elias). But once we leave this zone and get Democrats more amenable to the national Democratic Party (Ron Barber, presumably former U.S. surgeon general Richard Carmona) one has to start wondering whether the political side of the event isn’t a facade hiding a grim reality: that unions can either choose death by a thousand cuts (at the hands of the Wall Street financed Democratic Party), or death by a single blow (at the hands of the Wall Street financed Republican Party). It didn’t help in this regard that candidates from other labor-friendly political parties (or, perhaps better put, genuinely labor-friendly) such as the Green Party weren’t allowed to speak. Only candidates endorsed by the Pima Area Labor Federation were allowed to speak, though the Green Party itself was allowed a booth.