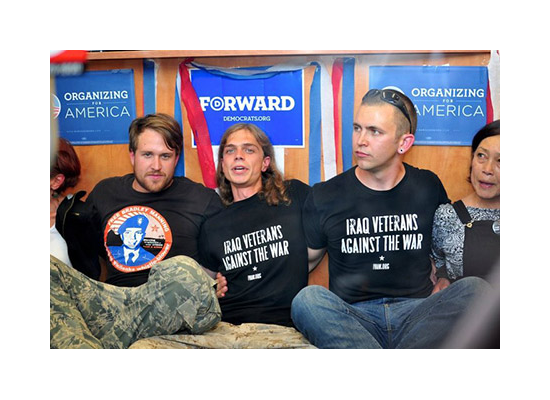 Thursday, September 6th, about twenty of Bradley Manning’s supporters, ranging in age across every generation from an infant to an 86-year-old veteran, demonstrated outside the Pima County Democratic Party/Obama for America office in Tucson, Arizona. The purpose of the protest, which occurred along with 32 other protests at Obama campaign offices throughout the country, was to tell President Obama to free Bradley Manning.

“We Came to the Obama campaign HQ here in Tucson to send a message to President Obama during the Democratic Convention to say you can pardon Bradley Manning and what he did was right and he is a hero, he is not a criminal.” said Felice Cohen-Joppa, one the organizers of the Tucson rally.

A small group went inside to deliver a letter all had signed to the President. The letter was read aloud inside the busy office, and the office director agreed to see that it was delivered to the national campaign and the President’s office. Free Bradley Manning campaign literature was handed out to office workers.

The Nationwide call to action was organized by The Bradley Manning Support Network, Afghans For Peace and SF Bay Iraq Veterans Against the War at local Obama Campaign Offices during the Democratic National Convention. Since Army PFC Bradley Manning’s arrest in May 2010 progressives and human rights activists have been asking, “Why isn’t President Obama stepping in to help Bradley?”

The September 6th Nationwide actions are a follow up to August 16th actions held on the West Coast when US military veterans in Portland OR, Oakland CA, and Los Angeles CA, occupied Obama 2012 campaign offices and faxed a letter of demands to the Obama campaign’s central office. Those letters began:

“As those who have spent years serving our country, we have faith that as Commander-in-Chief, President Obama will do the right thing in answering our request.”

The letter went on to list the following demands:

“That President Obama retract and apologize for remarks made in April 2011, in which he said Bradley Manning “broke the law.” Because President Obama is commander-in-chief, this constitutes unlawful command influence, violating Article 37 of the Uniform Code of Military Justice (UCMJ), and prevents Bradley from receiving a fair trial. That President Obama pardon the accused whistle-blower, taking into consideration his 800 days of pretrial confinement. UN torture chief Juan Mendez called Manning’s treatment “cruel and inhuman,” as it included nine months of solitary confinement at Quantico despite Brig psychiatrists recommending relaxed conditions.”

The Bradley Manning Support Network maintains hope that justice will prevail and that President Obama can be the vehicle of change on this issue, but first he needs to hear loud and clear from veterans and civilians across the country that the American people want amends for the unlawful torture of Bradley Manning, and believe he should be freed.