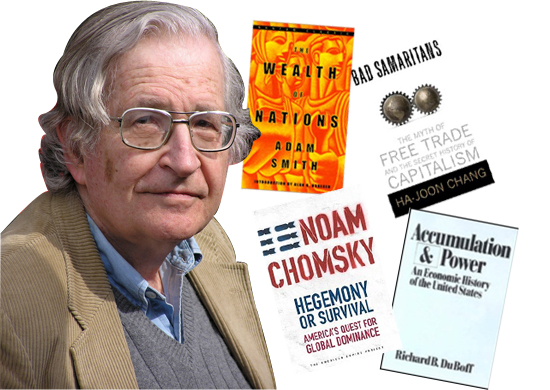 From Correspondence with Noam Chomasky: You have often made reference to Adam Smith’s advice to a young United States to focus on its advantage in exporting raw materials, and to the historical US policy to instead invest and prop up its industrial base. Where is this quote of Adam Smith’s found, and what was the extent of this US policy?

It’s in Adam Smith’s Wealth of Nations, Bk II, chap. 5. You can find it at http://www.econlog.econlib.org/library/Smith/smWN.html#. Search for “Were the Americans, either by combination or by any other sort of violence,”

On the Hamiltonian system of propping up industries, any book on economic history will provide the information, which is well-known. Say, Ha-Joon Chang, Kicking Away the Ladder or Bad Samaritans, or any other serious book. It continues until the present, in various guises. That’s why we can use computers and the internet, for example. Railroads were the biggest enterprise of the day. Private enterprise wasn’t up to running them, so it was handed over to the army. And that’s the least of it. The American system of mass production, which amazed the world (quality control, interchangeable parts, etc.), was developed in armories, where one can spend and risk freely, courtesy of the taxpayer. And of course the very high tariffs of the Hamiltonian system made it possible for the US to develop industries, defying Smith’s prescriptions (essentially those of modern economists). But all of this is minor. The oil of the 19th century was cotton. The US gained substantial control of cotton by extermination of the native population and slavery, rather serious violations of markets. And defying Smith’s plea that Americans not try to monopolize what they possessed, the Jacksonian Democrats annexed Texas and conquered half of Mexico in the hope that they could monopolize cotton and thus bring their dreaded enemy Britain to its knees and gain substantial control of the world — pretty much what Saddam Hussein was accused of when he conquered Kuwait, but this time realistic, and substantially achieved.

Important topics. Known to the better economic historians and in particular historians of technology. But remote from the national myths, as is often the case.

Regarding computers and the internet, weren’t lasers and semi-conductors also developed within the framework of a government industrial policy? In this regard, is Bell Labs an example of post-war market innovation?

There’s a lot of work on this in the history of technology. Among economic historians, though only some economists, it’s well-known. I’ve reviewed a lot of it and cited sources. There’s some discussion and sources in chap. 9 of my Hegemony or Survival, as well as in one of the best books on US economic history, by economist Richard DuBoff, Accumulation and Power, and a lot more elsewhere. I’ve been writing about it for 30 years, citing sources.

It’s quite true that Bell labs was a pioneer in development, including radio astronomy, transistors, lasers, etc. But that’s hardly a triumph of the market. AT&T had a government monopoly, and was therefore able to rip off the public to establish a great lab, at public expense. It also used wartime technology and plenty of government contracts. In the 1950s and 60s, I was in the Research Lab of Electronics at MIT, 100% Pentagon supported. I and others used to go to Bell labs frequently for joint work, seminars, etc. It was basically part of the Pentagon system, which created much of modern high tech. The government gave crucial help in other ways. Business couldn’t afford high quality transistors, so the Pentagon bought 100% of those produced at Western Electric, AT&Ts production facility. The corporation finally lost its monopoly, around 1980 I think, and the lab was quickly dismantled, and what was left was either sold off or turned to short-term commercial production.

All of this is entirely familiar to anyone who has the slightest familiarity with modern high tech, and in fact is well-studied. I reviewed some of the story (in commenting on some of Alan Greenspan’s ignorance, in Rogue States), but using standard sources, those I cited.