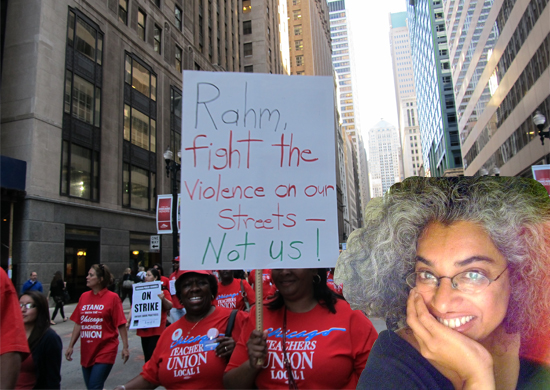 Few things have delighted me more in recent weeks than the sight of so many people, and not all of them teachers, clad in red t-shirts in support of the currently ongoing Chicago Teachers Union strike.

All around Chicago, cars and trucks are honking their support as they zip past groups of strikers, like the one outside Goudy High in my neighbourhood of Uptown. Micah Uetricht provides a vivid description of the first day of the strike, along with a history of how and why it came about. I write this amidst rumours that the strike may end today (Friday, September 14) and that students might return to school on Monday. Details of the final agreement will determine which side gets to declare a victory although it’s also likely that each one will do so, and quite emphatically.

Support for the strike has been weaker on the national front, with the New York Times sneering that it is “partly a product of a personality clash between the blunt mayor, Rahm Emanuel, and the tough Chicago Teachers Union president, Karen Lewis.” My liberal friends are aghast and disappointed at what they see as a betrayal on the part of the Times, but that editorial is in fact completely in keeping with the paper’s veneration of all things neoliberal. Personalising the strike makes complete sense because neoliberalism, as I’ve argued consistently, depends upon the politics of the personal to occlude the dramatic inequalities it helps foster.

Turning the strike into a clash of Titans allows the Times to evade – and not report too much on – the larger issues that the organisers take on, many of which have to do with the spectre of privatisation which haunts this city. These issues include poverty, under-served schools with no libraries and air-conditioning, forcibly installing Charter schools, ballooning class enrollments, and several other institutional factors which have nothing to do with personality conflicts and everything to do with the decimation of the Chicago Public Schools system.

The Washington Post’s Dylan Mathews has written an overly dramatic editorial, concluding that “[the strike] could affect [students’] lives for years into the future.” The piece was swiftly rebutted by Doug Henwood, who points out the flaws in the research presented and adds that the strike “[is] about fighting the privatization and union-busting agenda of Chicago Mayor Rahm Emanuel—which he shares with other big-city mayors like Michael Bloomberg, as well as his comrade Barack Obama. By circulating bogus stories about the damage the union is doing to the children of Chicago, Matthews is offering cover to this odious agenda.”

Over and over, the conversation returns to the issue of teachers’ pay even as many admit or point out that the strike isn’t really about increased pay. That does not, of course, stop the Chicago Tribune from snarling, “You’ve got to wonder if its members have any concept of how good they have it compared with their fellow Chicagoans.”

This is a bizarre statement to make, and a selfish and petulant one because it states quite explicitly that no one has a right to a comfortable life during an economic crisis: You’re all going down with me, fuckers! I don’t know how much the Tribune’s editors make, but I’m guessing their individual salaries are far higher than $70,000.

We have to wonder why teachers in particular are so maligned and hated. Henwood, in another of his posts on the strike, posits that “perhaps the thinking is that it’s ok for autoworkers or janitors to unionize because they’re pretty much interchangeable from an educated upper-middle-class perspective.” Corey Robin takes up the question, and writes about going to an excellent public school in the wealthy New York suburb of Chappaqua. Even there, despite the fact that his committed and talented teachers managed to ensure that a significant portion of the students went on to higher education, they felt the contempt of the community. Robin surmises that the prevailing sense was that “Teachers had opted out of the capitalist game; they weren’t in this world for money. There could be only one reason for that: they were losers.”

I think that Henwood and Robin are both right.

I also think that teachers, faced with so much contempt from so many, are well and truly screwed.

But I also want to expand this discussion by returning to the issue of teachers’ pay. According to those critical of the strike, teachers are being paid, on average, anywhere from $71,000 to $74,000 a year. Those in support of the teachers are quick to jump in and state that the average is, in fact, $56,000 a year.

I wonder if we, on the supposed left, who claim to be in support of teachers, can stop carping about the number and, instead, ask: What’s wrong with $74,000 as an average? When we constantly point to the lower number – and, in fact, beginning teachers may actually make less than that but continue on to the higher number and more – we are implicitly, no, explicitly reinforcing the idea that teachers should be paid less. In other words, when we keep battling the larger number with a smaller number, we are in fact saying, “Yes, teachers are losers, the lowest of the low, and they don’t actually deserve to have excellent pay, great health benefits, vacations in Europe, and sushi on demand.”

Okay, the last two might just be my own desires woven in there, but you see my point: It’s not just that teachers are disrespected but that teaching is not even considered a worthwhile profession, and that attitude is being fostered not by the meanie Right (whom we blame for all our woes), but the liberals and the so-called “Left.” Teaching requires training and skills, but you wouldn’t know that from some of their biggest supporters who keep hammering the point that teachers are in it for the love. At the recent Democratic Convention, Michelle Obama spoke about “..teachers in a near-bankrupt school district who vowed to keep teaching without pay.” My response was and continues to be: Who are these assholes ruining it for everyone else? What kind of professionals would work for free? What kinds of trust funds do they have?

It’s easy to dismiss Obama’s words as campaign rhetoric but this is a prevalent attitude towards teaching: That people simply do it for love, and that teachers will get by on the passion they feel and generate in their students.

This is precisely the attitude that has kept the ranks of adjuncts swelling in American universities. The rise in their numbers comes with a widespread desperation on the part of thousands to keep their jobs. What this means is that teaching at universities, even the most elite ones (in case you thought your nephew at Harvard was only being taught by world-famous professors) is increasingly done by part-time faculty with few to no benefits, working multiple jobs for little pay, and who are evaluated not by the standards used for full-time faculty but mostly by an array of largely subjective methods. As I’ve written in a piece for Arab Studies Quarterly, “Who Loves Teaching? Free Speech and the Myth of the Academy as a Place to Love and Be the Left” (contact me directly if you’d like a pdf), the dirty little secret about adjunct life is that many part-timers devise ways to manipulate the system of student teaching evaluations so that they read as “excellent” across the board. Throw in the factor of gender – that teaching has historically been considered and demeaned as a “woman’s profession,” and that female teachers are perpetually seen as caretakers in the classroom while their male counterparts are considered pedagogical figures from the minute they enter classrooms – and you have a system that is even further skewed.

What, you might ask, does this have to do with the CTU in particular and with the profession of teaching at the elementary, middle, and high school levels in general? Everything, because it’s the failure of even the so-called Left to aggressively insist that teachers should be well-paid professionals that has had a ripple effect on the profession of teaching in general. There are several reasons for the disastrous expansion of adjunct teaching positions and the general lack of compensation for teaching skills, but somewhere in all of them we can find this: That teaching is not considered a profession but a calling or even, simply, an act of love.

But what does love mean and why do we pretend that teaching, unlike other professions must exemplify this mysterious thing? Who, after all, does not love their job? Remember Gordon Gecko? Trust me, the guy loved his job. Donald Trump? Surely we can all agree that he loves his job which, as far as we can discern, consists of getting real estate developers to finance elaborate skyscrapers without putting in a dime of his own. Warren Buffet, who encircles the globe with ever more nefarious schemes that put the health of millions at risk but who is still adored by liberals at home, must surely love his job. Love of one’s job is surely a given, and it should not be a reason to exploit people.

Tomorrow, I will join thousands of Chicagoans to rally for the rights of teachers, and for me that includes their right to be well-paid professionals who, after hours and months of exhausting work can wind down with a glass of expensive wine and take European vacations.

No matter what the outcome of the negotiations, Rahm Emanuel will be put on warning that the people of Chicago support not just their teachers but deep, structural changes in education. Obama will be put on notice that his support for “education reform,” a term that hides the evisceration of public education, will not be allowed to continue unchallenged. And I will continue to insist that teachers do and should do what they do for excellent pay and benefits, not because they have some masochistic need to suffer poverty or because they can depend on husbands or wives or trust funds to merely heed a calling.

In all of this, I hope we can all remember that love is not an antidote to neoliberalism but the whole point of it. Love, in this context, is a dangerous forgetting.

If you liked this piece, please consider donating to help this writer continue her work. No amount is too small.

My thanks to Jason Shanley, SC, AS, AW, and AC for helping me think through some of the issues here.