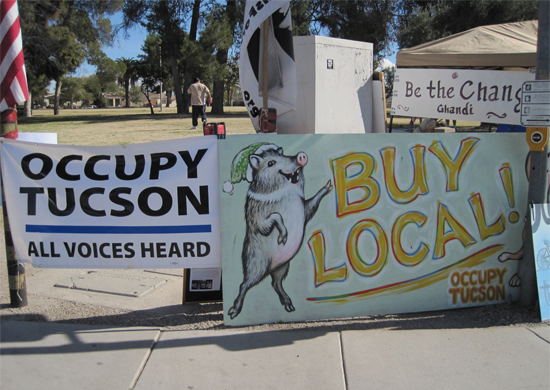 Slowly but surely the cases of those charged in relation to Occupy Tucson protests are being brought to trial, giving us a glimpse into how the courts will react to Occupy tactics and in what direction the local Occupy movement might go with its future protests.

In one trial, three occupiers were tried in Pima County Superior Court on Friday, August 17. Together the three faced a total of five criminal misdemeanor charges for being in Veinte de Agosto park in downtown Tucson after-hours. One defendant’s charge stemmed from his being in the park after-hours in late October of 2011, when the main encampment of Occupy Tucson was still in Armory Park but a small group was trying a establish presence at Veinte de Agosto; another defendant’s charge stemmed from his allegedly being in the park after-hours on December 5 (by which time Veinte de Agosto had became the main encampment); the first defendant tried faced three charges for being in the park after-hours on three different occasions. The judge made clear early in the first trial that he would not entertain First Amendment arguments concerning the rights of the defendants to be in the park after hours, nor did he accept the novel defense by defense lawyer Paul Gattone in the first trial that, because the land that constitutes Veinte de Agosto has never been zoned as a park and has no address (unlike all of the other city parks), it is not in fact a city park and so cannot have a park curfew. Neither, however, did the judge accept prosecution arguments to the effect that the protestors should be subject to arrest even if they were on the sidewalk. Therefore, because the judge was not convinced that the prosecution had proven that two of the defendants were actually in the park as opposed to on the sidewalk after the park curfew, three of the five cases resulted in acquittals.  Two of the defendants, however, were found guilty of one charge each of criminal trespass, verdicts which might be appealed.

In more recent trials (September 6), an Occupy defendant was acquitted in a directed verdict of charges that he was blocking use of the easement at De Anza park because the police couldn’t prove that any of the belongings that were allegedly blocking use of the easement belonged to him.  The prosecution argued that the defendant could be considered a part of the things that were blocking the easement, but the judge refused to entertain this notion.  In the following trials, two Occupy defendants were acquitted of one charge each of camping in Veinte de Agosto park after hours because the police couldn’t prove that the bench and table on the sidewalk by the park, at which they were sitting, was actually in the park.

The most recent court date we have information on was the September 7th trial of Mary DeCamp, who posted the following report on the Occupy Tucson forum:

“I went to City Court today on 6 of the “camping in the park after dark” tickets.

I was found Guilty on 4 of them; 1 was Not Guilty; and 1 was dismissed because the officer was not available to testify.

What I learned was that a “Rule 20” motion can be used when the prosecution does not prove all parts of the charges against a defendant. The officer in my “Not Guilty” case could not testify that signs were posted in the park, so the judge prompted me to use the “Rule 20” motion. Ay yi yi. So stupid to get off on a technicality when such bigger, broader issues are at stake. Same thing happened on the ticket from de Anza’s March 1st ouster – Judge Chayett ruled Not Guilty because the definition of “sidewalk” came from one chapter of the Arizona Revised Statutes, while the ticket used a different chapter to charge me with obstruction.

Thanks to Patti for being there as emotional support this morning!

My “scorecard” so far is….
2 Not Guilty
9 Guilty
15 Dismissed (Military Plaza at Armory Park before the signs were clearly posted)
11 still pending