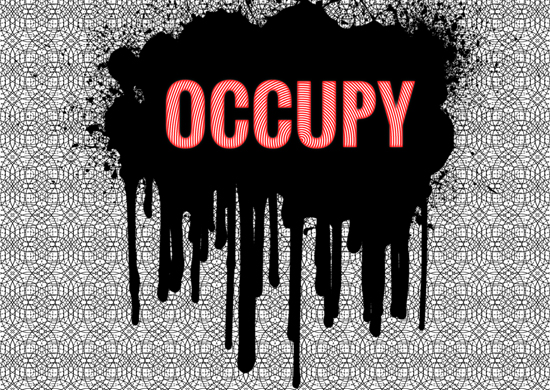 It is the natural check on intolerance and privilege provided by assembling with all comers in a full out urban encampment that distinguished Occupy Tucson (OT) from the mainstream left/progressive organizing that has dominated the blue political space in the corporate sponsored red/blue show for more than a generation.  All comers include those already encamped in the urban center who painted their stripe in OT from day one.

The homeless occupied Military Plaza (aka Armory Park) on October 15, 2011 and endured 3 evictions, forming the majority at Occupy Tucson encampments in Military Plaza, Veinte de Agosto (VdA), the eastern sidewalk of VdA and, finally, the easement between Stone Avenue and De Anza Park until the final eviction on March 1, 2012. The illegal eviction from the easement ended one of the longest continuous occupation style demonstrations in the country which generated more criminal citations for civil disobedience than any but Occupy Wall Street.

That illegal eviction from the easement also marked the scattering of the collected Occupiers who had no home to return to but the street. The scattering of a group of men and women who had adopted the proud designation “Hardgrounders,” holding assemblies in the last weeks that grew to over 40 of the 75 occupiers. After four months, demonstrating first amendment protected assembly and evidence of the need for 24-hour encampment to facilitate the full expression of their unique voices.

The designations “homeless” and “hardgrounder” mask the face of the humanity once assembled, indigenous, latino, asian, black, white, men, women, children, transgendered, gay, lesbian, straight of all conceivable background and belief. Shamefully dehumanized into a labeled class, feared and despised for reminding us of the nightmare that horrifies so many desperately scrambling to service our lavish lifestyles and crippling debt.

If not unusually enlightened, at least less delusional and jaded by U.S. middle class sentimentality. Some homeless by choice, most bearing some responsibility for their circumstances, yet all front-line victims of the injustice and inequity of our dysfunctional society. Not savvy organizers of political dissent, just enthusiastic participants intentionally assembled to change the world. Full aware that the whole world was either watching or protesting with them.

Most were encamped before OT began and remain encamped to this day. Possessing varying portions of the skills necessary to survive in small camps and/or solo on the street, the transition to a larger group encampment was no great hardship for them. The mad diversity generated unpredictable and seemingly unmanageable social dynamics at times, but also created an abundance of cathartic, eye-opening, bridge building, tolerance developing, paradigm tweaking, movement-generating revolutionary interactions among free people.

Perhaps the greatest hardship faced was the painful realization that many of the “leaders” of this “leaderless” movement treated them in the same way as the rest of society treats them. Feeling marginalized within OT by those who came from their homes to speak at the General Assemblies and controlled the revenue and resources, resentment grew and numbers diminished. Still, as time wore on, those who endured began to use the organizational tools provided. They began to use consensus based decision making to address their needs within their own organization, OT.

By the time the hardgrounders began flexing their political muscle, most of the occupiers with homes had returned to them. For those with homes, living in a full-time encampment does provide hardship. There were no showers, no modern plumbing, no fridge or freezer, no TV, few couches, no irons, no electricity, little privacy and a growing awareness that the mainstream media were portraying “us” as “them.” “Them” being the homeless.

The question began to arise about those present at the encampment, those fed, even about those arrested, “How many of them were Occupiers?” What does this mean when OT identifies as the 99%? Was the question, how many were among the 1%? Surely not, the question was how many we, and how many them.

Many are greatly relieved to be free of the distractions of the encampment and feel righteously privileged to hold the reigns of OT, being among the willing and able that stepped up and still remain. Examine your experience and your conscience with the benefit of hindsight and you may recognize the irreplaceable abilities which empowered OT. Many who brought out what was best about OT, what was best in ourselves, have been left behind and we have not fully come to terms with this.