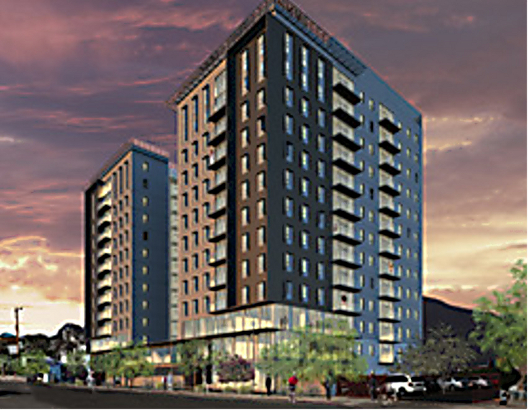 Every time I pass by the new, five-story stack-up of student housing crammed in along 6th Street between 4th Ave. and 6th Avenue—called “The District”—I pine for the old Lohse Y. And not just because I swam there with my Tucson High PE class in the 60s, or because my daughter learned to swim there before she could walk, or even that waybackwhen, our glorious Day of the Dead parade got started in the old gym.

Admittedly, I’ve been around long enough that I have to cop to a bit of Tucson nostalgia, but not because I want to go back to thegoodolddays. I do regret that while I was on the City Council in the 90s our attempts to partner with the private sector and turn this hulking property (built to withstand a Cold War attack) into a community center/art center, came to naught. God knows we could use more public space these days. But, no, my pining is more about the process that connects our private hopes and dreams to our shared community visions and plans: whereby elected leaders pay attention to the needs of neighborhoods and businesses alike when it comes to preserving and enhancing our quality of life.

What was the City Council thinking a few years back, when they passed The Greater Infill Incentive District Overlay Zone that created “The District”? (Point of clarification: An overlay zone is a regulatory tool that creates a special district that sometimes involves major rezoning, but often is placed over existing zoning with special incentives and regulations attached to it. For example, for “The District,” the overlay did not change the use of the underlying zone, but allowed for a sizeable increase in density and height.)

If I’m being cynical, I’d say that for the majority of our city reps, the overlay is a way of getting around community involvement on prickly density, design, and sometimes land use issues. With an overlay zone, these problems bypass the elected and go directly to a bureaucrat in Development Services.

In a more generous state of mind, I remember how hard it was when I was on the City Council, to broker a successful transition from the old to the new. But give me a break: at least they could’ve insisted the project have a little historic feel. I mean it’s nestled in between an officially designated historic neighborhood (an Historic Preservation Zone) and a publically recorded Historic Warehouse District. The gutting of the once-vibrant City Planning Department—due to revenue shortages—must only be making things worse. I remember needing all the unbias help I could get to deal with the complexities that naturally arise as cities grow and change.

Chris Ganz, who had to sell his West University home or live with the impact of hundreds of students living in his backyard, is still amazed at how quickly the city pushed this complex project through. “They used the overlay zone to give the developer maximum flexibility. The City promised that those of us who were impacted would have input. But that never happened.”

That’s why last winter, when the city proposed the Main Gate District Overlay Zone on the north side of the West University neighborhood, Ganz and scores of residents like him, immediately became active in the process. And why in April 2012, as Mayor and Council rushed to rezone property from First to Speedway, and Park to Euclid—permitting multiple 14-story buildings and driving a stake into years of building preservation into the planning process—these same folks basically put their lives on hold for three weeks. They hit the streets to gather the 8,5000 signatures needed to get a referendum measure on the ballot that would revoke the overlay zone.

“What the city did with this rezoning was to come in to one of only five Historic Preservation Zones in Tucson and change all the rules in only three months,“ Ganz recalls. “With this overlay they create a precedent that says: Look, we can take any block—historic or not—in any neighborhood and rezone it with very little give or take.”

By the beginning of May they’d gathered some 12,000 signatures! But due to an overlooked technicality—a few lines were missing from the petition summary, even though each petition had to be carried with an extra 30 pages of Overlay documentation—many signatures were thrown out and the referendum measure was denied. But the issue was important enough that neighbors all over Tucson pitched in to hire legal counsel so West University could plead their case in court.

Ganz and others are disappointed but not surprised that so far the judges have upheld the City Clerk’s decision. The referendum process in Arizona is notoriously vulnerable to outside challenge. Only one or two referendums have ever succeeded.

The 12,000 signatures appeared to have an effect on the Mayor and Council. Steve Kosachik, who represents West University, proposed that building heights in the most historic block of the overlay be reduced to the neighborhood’s original request of no more than 90 feet (8 stories still being way taller than anything in the area).  But the Arizona Starnet reported that Councilwoman Shirley “Scott said developer Bill Viner sent an email before (the August 7, 2012 City Council) meeting to four council members and the mayor explaining why he needed the added height.”  She moved to increase the height from 90 to 130 feet, and it passed 4-3.  Council members Regina Romero,  Karen Uhlich and Steve Kozachik dissented.

“The whole system is broken,“ Ganz says. After years of deficit, the city has essentially spread its few remaining planners across all the departments. Much of the architectural and legal work involved in this last overlay/large rezoning process was done by consultants who were paid by Campus Acquisition, a company that stands to make a lot of money from this rezoning by building a 14-story luxury dorm in the Overlay Zone. With so few urban planners available to help the Mayor and Council make long-term decisions, will we continue to see more privatization of community planning?

Right now the City is considering two additional overlay zones related to street widenings—one along Grant Road and the other on Broadway. Already neighborhoods are wary, and concerned about the role of an unelected Regional Transportation Authority (RTA) in all these changes. Shouldn’t Mayor and Council be listening to the whole community before making plans that affect our quality of life for decades to come?

There’s nothing nostalgic about it. It’s just plain democracy in action.

1 thought on “Whose Vision Is This Anyway?”