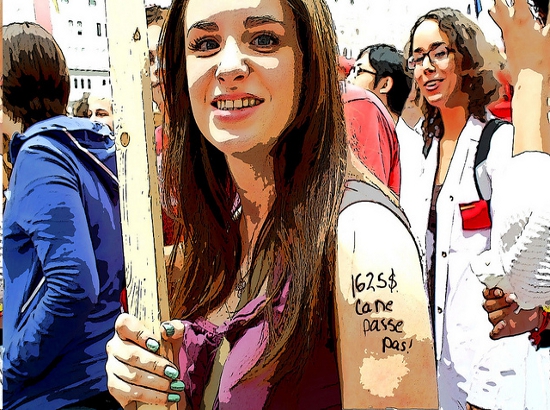 Psst, the secret is out: We fought the law and we won.

Quebec’s five-month college and university student strike against tuition hikes ended in victory last week. Coming on the heels of the Arab Spring, the European revolts against disastrous austerity policies and the Occupy movement, Quebec students in three province-wide associations struck, hung tough and refused to back down against the repressive Liberal government’s plan to raise tuition 75 percent (or $1,625) over three years — winning a major battle against neoliberalism that was all but hidden from American eyes. In Quebec, most colleges and universities are public.

Over the last four decades, Quebec students have collectively struck against tuition hikes and cut-backs to loans and bursaries — but this strike was by far the most ferocious, drawing battle lines between the corporate state and the population. (Full disclosure, I am almost four decades beyond my Quebec student days, but was one of many arrested at the 2012 protests.)

Nicknamed Printemps Erable, or Maple Spring, as a pun on “Printemps Arabe,” or Arab Spring in French, this strike by the so-called “spoiled” students — “roi enfants” in French or child-kings — drove many Quebecois crazy. Despite our universal free health care, many think that students should pay for education. Before the strike, Quebec graduate students’ tuition averaged $2,624, less than the average $3,000 tuition — “a bargain” according to CNN — for community college in the U.S. For example, Dawson Community College in Montana costs $3,006 a year in tuition and fees — 15 to 30 times as much as Dawson College in Montreal, which charges $100 to $200 in student fees.

The students and then the citizenry wearing their carré rouge (red square)forced the Liberal government into a stalemate. They finally sued for peace, calling an election to let the voters decide. The Liberals suffered a major defeat, partially because of their corruption scandals erupting every few weeks. During the August elections period, the students dialed down the protests because many students were away working. They also understood that the government would use the disruptions and (police) violence to claim that only the Liberals were saving the province from the “rioting” students.

The revolting students paid a heavy price. They put their academic year in jeopardy and many were beat up by the cops. Over 200,000 students maintained a strike for five months, 3,387 were arrested and hundreds injured — some seriously by plastic bullets and batons.

There were more than 100 night demonstrations, most being 1,000 to 5,000 strong, that included theatrical, aerobic and nearly naked protests. And until the summer recess began, there were usually another 3 or 4 daily demonstrations or direct actions, like blocking bridges, schools and streets.

Since most of the demonstrations were declared illegal, these were the largest acts of civil disobedience ever in North America. They sparked the largest demonstrations in Canada, three involving 100,000 to 300,000 protesters.  Quebec spent about $200 million repressing the protests and suspending and adjusting the school schedule, which is more than they would have recouped from any tuition increase —  proving that this was not so much about the money as about competing visions of socialism versus capitalism for the province.

The strategy of the students was simple: organize, hold general assemblies, strike, take it to the streets and resist the corporate-state. And along the way, many thousands of non-students, parents, teachers of all ages and multi-generational families joined in. Instead of going underground after the demonstrations were made illegal by the government on May 18, they morphed overnight into noisy casseroles, with people banging on pots and pans in the streets. It truly felt like the neighborhood was out in the streets breaking the law.

The French nationalist Parti Quebecois (PQ), supportive of the demands by the students to at least have a moratorium on the tuition hike, won the election with a minority government.

Immediately after the PQ took over last week, they announced a tuition freeze, rescinded most of the anti-student strike Law 12 (formerly Bill 78), ended Quebec’s support for shale gas fracking and also pledged to shut down Quebec’s only nuclear power plant. So they are off to a relatively popular start, but pressure must be maintained to ensure that they follow through on these. Previously in power, the PQ attacked the nurse’s union and attempted to raise tuition 30 percent. The PQ is a neoliberal party that, like the Democrats, absorb a lot of union energy and progressive Quebecois nationalists. They seem to have a thinly disguised antipathy to Muslims and non-French speaking immigrants. The English (Anglophones) — who we call the “angryphones” — officially hate the PQ.

The left alternative party, Quebec Solidaire who wholeheartedly supported the strike, didn’t do well in the election, garnering only 8 percent of the vote. But Quebec’s most popular politician Amir Khadir was re-elected as was the party’s coleader Françoise David, who is much admired by the Quebec feminist left.

There was a split between the English and French on the strike. The strike was almost entirely French students, as many saw this as a battle for the future of “their Quebec” — a Quebec whose values should be more collective and socialist than greedy capitalist.

Race, French nationalism and ethnicity loom large in Quebec’s political movements, and though most “ethnic communities” and immigrants are French speaking and educated in French, they were not well represented in the strike. This is due at least in part to systemic racial divisions in Quebec’s progressive movements due to Quebecois nationalism, but also because most strikers were liberal arts students, not those in the engineering, science and business programs favored by immigrants.

There are still political divisions in the student movement as well. CLASSE, which organized half of the strikers and mobilized most of the direct actions, wants free tuition as a goal. They have been supportive of other progressive demands, recognize the colonial occupation of native lands and prioritizedopposing “Plan Nord,” the anti-indigenous state-sponsored development plan for north Quebec by mining and development corporations.

At the monthly mass student demonstration on September 22, several thousand marched for free tuition in the rain. No one believed they could have won “free tuition” now, not without a major union or civil uprising, but it can be achievedwith political will and policy changes in public financing. The other two student associations, whose demand was essentially stopping a tuition hike, declared victory and ended their actions.

While the unions were financially supportive of the striking student associations, they didn’t mobilize their members, which was a major disappointment. Union parents have a vested interest in low tuition for their children. Had the unions solidly supported the successful student strike mobilization, their broader working class demands and changing power relations in Quebec could be something we might be striving for now, instead of getting caught up in a demobilizing election between the major capitalist parties.

It is too early to say what this all means. The students who struck must be tired, but elated. They did win all their “realistic” demands. Only Quebec and two other smaller provinces have not had tuition increases in the last few years.

On the face of it, it was a single-issue strike against small $325 per year tuition hikes, but the potential inspiration and lessons that can be learned from defeating a neoliberal policy can’t be underestimated. It was the most amazing fightback in North America against neoliberalism in decades. “Neoliberalism” is now part of Quebec’s vocabulary. The students’ parents of my generation are impressed and gratified that our organizing and strikes when we were young students paid off.

The successful student strike teaches one hard lesson that must be understood: We look at the rest of North America and see that there is a lot of talk and organizing to build for major single actions, dispersed movements and, of course, electoral politics with the traditional party system. Quebec shows that there is no substitute to building sustainable democratic progressive mass organizations like Quebec students started decades ago. Despite all of the chatter about new communication technologies, creative organizing and flash mobs, these tools and tactics can’t easily mobilize a critical mass and sustain itself to achieve such a tangible victory. Unions and mass-based organizations have that potential.

Students and their families across North America are being forced to pay for skyrocketing tuition as governments attempt to abandon their support for education, and private schools are allowed to cherry pick students from wealthy families. Many families will have to coldly decide if higher education is worth it. Quebec’s difficult lesson is clear: building and supporting large organizations that mobilize a critical mass of students, parents and teachers is the only model that can successfully make education affordable.

The struggle over reclaiming our economy and our society has a number of related concrete issues that people can organize around, including living wages, health care and education. A long-term vision and dedication is what drove the union, civil rights, feminist, LGBT and Quebec student movements forward when times were most dire. Revolution and victory often takes a long time but they kept their eyes on the prize.

This article was originally published on WagingNonviolence.org.