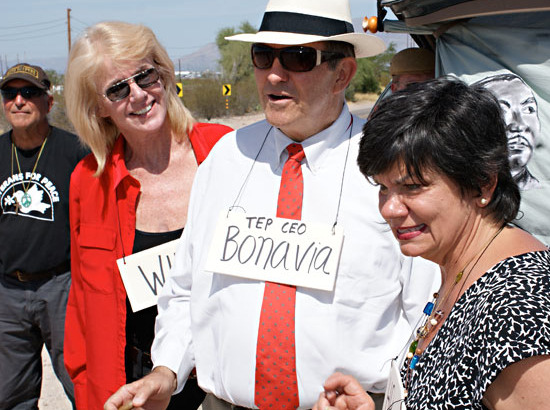 PHOTOS BY WILLIAM BEAVER — Three activists were arrested Thursday, October 4, in an action at Tucson Electric Power’s (TEP) Sundt Generating Station at Irvington and Alvernon. It was the first civil disobedience action in the Tucson Climate Action Network’s (TUCAN) escalating campaign to get TEP not only to pledge to stop burning coal in Tucson, but to create a plan to transition to 80% renewables by 2050. The action follows TUCAN’s demonstration against TEP’s downtown headquarters’ in August and a street theater performance in September that briefly closed the downtown building. The activists arrested on Thursday–Terry Pawlowski, Jim Driscoll and Occupy Tucson activist Sherry Mann–were protesting the stockpiling and burning of coal at the plant. According to TUCAN’s press release, “every month, a train continues to pull over one hundred railroad cars filled with coal into Sundt, adding to a growing mountain of coal, visible from I-10, a stockpile to generate future electric power for Tucson.” Though TEP is not currently burning coal (a principal contributor to global warming) in the plant’s dual-use (gas or coal) furnace because of low prices for natural gas, it has done so in the recent past and will certainly do so again in the future. In fact, according to TUCAN, TEP is largely a coal company in that over 80% of its generating facilities statewide burn coal and less than 2% of its power is generated from solar energy.