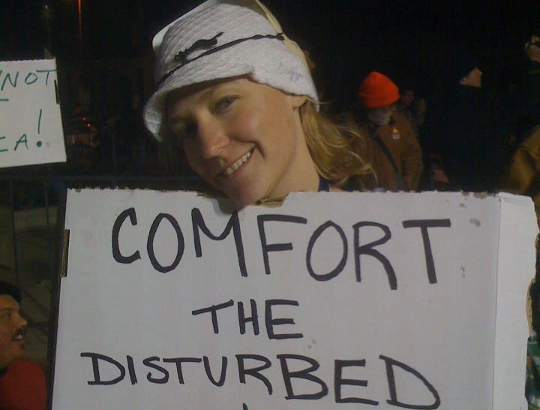 Exactly one year ago I got involved with the largest movement in human history. On October 15th 2011, people from all walks of life gathered in 87 countries and over 1600 cities to show their discontent with the with the corporate control of our global society. On this day, millions of people came to the realization that their personal hopes and fears were also those of a massive global collective consciousness. In the 2 weeks leading up to the 15th, I focused heavily on researching issues, watching OWS, and recruiting friends to join me on the day of action. When it came down to the day, it was my 10 yr old niece who was excited when she heard i would be attending and insisted on going with me. So with freshly made signs we walked in to Armory Park together. After walking around, making signs, and interacting with people it was time to take my niece home. With no intention of staying overnight since I was in a park, downtown, at night, and by myself i returned with a light hoodie and my hand made sign. After listening to speeches and chalking the ground i sat down to watch a documentary called “The Inside Job”.

The movie was then interrupted in order to watch Phoenix protesters being arrested and an announcement. The announcement stated that the police would be coming and everyone would have to make a choice of either staying with the potential of being arrested or leaving. Following this was the sentence that took hold of me… “if everyone leaves then this ends tonight”. So with my light hoodie, surrounded by strangers, i laid down on the cold damp grass to finish watching the documentary and get my first paper arrest for being in the park after hours. I walked into the unknown that day only to find that i was connected, in so many ways, to something much bigger than i could have ever imagined. That day started a deep connection with so many people, not just the ones in the park with me, or the ones who came up to thank me for being there when they could not, but with the millions of people worldwide. Only those who were there can understand the bond that night (and the months to follow) created. To my occupy family, I love you all and you will forever be in my heart!