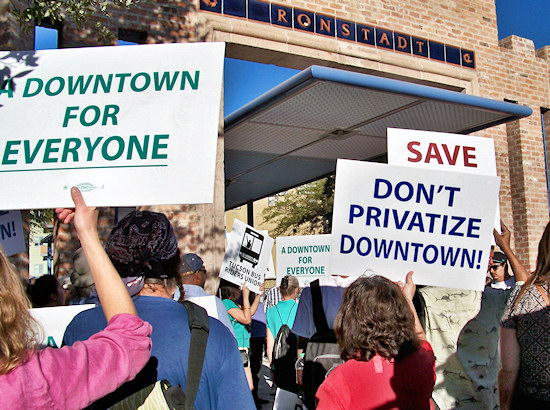 The Tucson Bus Riders Union put on an impressive show of force on Monday, October 22, when some sixty members and supporters turned out for a demonstration downtown to raise the alarm over negotiations that could lead to the closing of the downtown Ronstadt Transit Center.

Indeed, though the Arizona Daily Star would be loath to admit it (they generally consider political demonstrations to be manufactured news and so don’t cover them), the demonstration evidently inspired the paper to do a front page story on the issue in the next day’s edition. In fact the Star reported favorably on the Bus Riders Union and the points the group made about the negotiations between the city and the owners of a scenic 284-acre parcel of unspoiled desert at Anklam and Speedway. These negotiations could lead to swapping downtown property such as the Ronstadt Center (heavily used as a transit point by poor and working class Tucsonans to get around in this car-dominated city) for the desert parcel to keep it from being developed. [“Transit center may be swapped,” October 23]

After reading the article, a reader concerned with the removal of the transit center from downtown will probably feel somewhat reassured that Ronstadt Center is secure in its current location. But, unfortunately, this might be deceptive: a similar scenario played out a few years ago when the Greyhound Bus Depot, which for many years was next to the Rialto Theater, was torn down in 2004 in the name of downtown redevelopment. Its relocation next to I-10 south of downtown was supposed to be a temporary measure, and there was much talk on the city council (and even a resolution, though a non-binding one, was passed to the effect) of locating a new bus station on the lot next to the AMTRAK station. And yet the bus station remains next to I-10. Ironically, even as we are being reassured that Ronstadt Center would only be shifted slightly north in the case of a land swap, it is apparently to be shifted north onto the very land that we were told a few years back was going to be used for the Greyhound Bus station (the city council formally killed the idea of locating the Greyhound station next to the AMTRAK station in a 2010 vote).

The reason why the bus riders union has good reason to fear the removal of Ronstadt from downtown is the presence — though it is a behind-the-scenes presence in the negotiations over the land swap — of downtown business interests. They are quite open about wanting to get the Ronstadt Center out of the downtown. Why? I’ll quote from an article written for the original (corporate) Tucson Citizen, and representative, for all of its faux objectivity, of this business point of view. The article, titled “Downtown transit center on the move?” (Dec. 19, 2006) starts out:

“The Ronstadt Transit Center makes it easy to get downtown without a car, but loitering in the area is a problem, business people say.

“The city’s Rio Nuevo downtown rejuvenation is showing signs of renewed life, which has some people wondering whether the Ronstadt Transit Center should remain where it is.

“The bus center is a magnet for hangers-out, including drug dealers and violent criminals, authorities say. People who don’t drive or can’t, including homeless and mentally ill people, also congregate there.”

The article goes on to say:

“With upscale residential, retail, office and restaurant developments on the horizon, some investors and business owners are asking: Isn’t this the right time to think about moving the bus station and freeing up the 2.7-acre parcel for a higher use?”

The grotesque depiction of Sun Tran riders, as well as the reference to “a higher use,” lead us to an obvious conclusion. The business interests want to turn the downtown, i.e., what is traditionally a public space, into an upper-class neighborhood and business zone that would essentially keep “undesirables” out — that is, people whose presence, manner or just the fact that they aren’t very well off will be offensive to those Tucsonans who have the money to eat at up-scale restaurants and shop at the boutiques city planners want to draw downtown.

Already, it would seem, this urban planning for “the twenty percent” (i.e., upscale Tucsonans) has led to the shelving of the very logical plan of making the renovated train station part of a transportation hub. By removing the Greyhound bus station from the downtown, and continually threatening Ronstadt Center, we seem to moving closer and closer to a reality in which a renovated train station is primarily to be used as an up-scale restaurant and food store.

Perhaps, in time, somebody will start proposing that AMTRAK itself be removed from the train station.