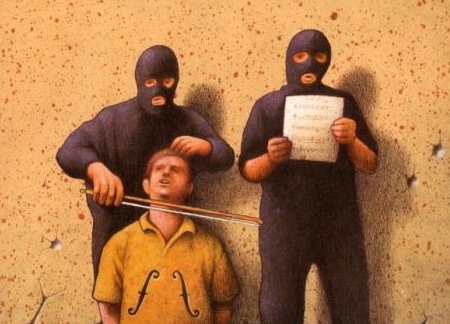 Since this is the height of the political season, I have decided that it would make sense for me to say something about politics which, of course, doesn’t matter. And that, obviously, is a political statement.

Last night was the third and final round of what are commonly believed to be debates involving the two presidential candidates. What was said is not very interesting or surprising at all, except in one respect: the two contestants played their role in accordance with a certain unwritten and unexpressed rule of discourse. This rule requires them to strictly adhere to a fictional, toy version of the world and of the role of the President of the US within it. We did not see two candidates campaigning to be elected into a position of leadership, but two actors auditioning for the role of President in a play that takes place strictly in the past. Now, in a normal course of events, if one candidate started carrying on like that, the other candidate would be a fool to not try to score points by pointing this fact out to the electorate. But this situation is different: here, both candidates know with absolute clarity that they are auditioning for a ceremonial role, nothing more, and that bringing even the tiniest bit of reality into it would only jeopardize their chances of being elected.

You see, they are auditioning for the role of someone who pretends to be “running” a country (whatever that means) that is itself not exactly running. It is by now defined by just two things: unstoppable inertia in the wrong direction, and a long list of broken promises. The federal government over which, if elected, they will pretend to “preside” (whatever that means) has two remaining choices: continue with the strategy of hemorrhaging debt and collapse in a few years once that strategy stops working, or don’t continue with that strategy, and collapse now.

The topic of last night’s get-together was foreign policy. And so here is a country whose diplomats cower behind blast walls afraid for their lives (which they sometimes lose). A country that has lost (in the sense of losing the peace) two major conflicts (Iraq and Afghanistan) and a few smaller ones, and where its efforts in places such as Libya and Syria have only succeeded in destabilizing them. A country whose very expensive military has highest suicide rates in the world and has not been able to pacify any place, even a place that was weak, disorganized, backward or pre-destroyed by other militaries. A country whose main tool of foreign policy is political assassination using Predator drones. From the point of view of electoral politics, it should be clear by now what the goal of foreign policy should be: the goal of foreign policy should be to avoid discussing it, and in this both of the candidates have succeeded admirably.

How did they do it? At first it seems difficult to understand how these two relatively well-informed individuals could navigate such a minefield of dangerous facts without stepping on a single one. At first, I thought that this must take a lot of training, some creativity, and even some luck. But then I realized that there might be a new rule operating at the level of language that makes the entire operation perfectly safe and risk-free.

We tend to automatically assume that human language—any human language—can (with the help of a trained translator if necessary) be made to express any thought; that there exists a universal, innate human capacity for language, and that language is a universal tool. Noam Chomsky is the undisputed champion of Universal Grammar, which is an attempt to formalize this capacity as a set of universal, abstract syntactic rules, but he has recently conceded that his creation is a mere potentiality that may not be fully realized in any given language. What caused Chomsky to qualify his claim to linguistic universality was the recent research into Pirahã, a language spoken by a small group of hunter-gatherers in the Amazon. Pirahã is a highly unusual language. For one thing, its form is highly redundant, allowing it to be either whispered or hummed without any loss of meaning. But most notably, it lacks recursion—the ability to say things like “This is the cat that killed the rat that ate the malt that lay in the house that Jack built.” Since recursion is considered to be a key element of Universal Grammar, this was taken by some to mean that Pirahã is not a complete language, possessing, as it does, a finite set of possible phrases rather than an infinite set of possible sentences. Another notable feature is that rules of evidence are wired right into the grammar: in Pirahã the source of information is obligatorily marked with reference to known individuals using a specific set of verb suffixes. Taken together with the impossibility of saying something like “Jesus said that…” this feature makes the Pirahã immune to proselytizing by missionaries: spiritual evidence is ruled inadmissible on a technicality. Lastly, Pirahã lack the ability to count, and, in spite of wanting very much to learn to use numbers, to avoid being cheated when trading other tribes, have been unable to do so. Pirahã appear to have one word to signify quantity, which can mean both “few” and “many,” the gradation between the two being a subtle tonal difference. It is not that they don’t have the concept of quantity, but their experience of quantity is similar to how we perceive quality: it is analog rather than digital. In spite of these linguistic limitations, the Pirahã are a carefree, thriving little tribe who get on splendidly with each other and seem quite happy with their lot in life.

The Pirahã are definitely a linguistic outlier, but once you get used to the idea that human languages are not all that universal but are all limited in one way or another in what they are capable of expressing, you begin to see all around you linguistic limitations, be they evolved or self-imposed, standing in the way of cognition. And this includes the presidential debates. Here, the new rule is not a grammatical rule but a discourse rule. Discourse does have rules, covered by a branch of Linguistics called Pragmatics. An instance of discourse is a single conversation, but it can also apply to an entire national political conversation in the course of a campaign. A discourse contains a certain set of discourse antecedents, which are elements that have previously been introduced into the discourse as new topics. The process by which new topics may be introduced into a discourse varies, and may be more or less difficult. But whenever a new topic is introduced into a conversation, that act must have some motivation behind it. The new rule is simple: play with the discourse antecedents—the kit of parts of contemporary political dialogue—and don’t try to introduce new ones. The reason for the rule is obvious: any one of these new bits of information might turn out to be booby-trapped—tainted with the unspeakable reality of the country’s true predicament.