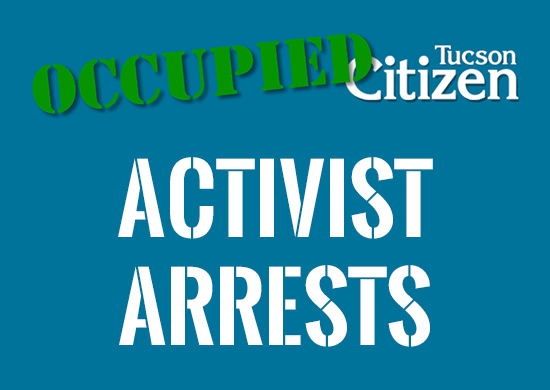 One long-time Arizona journalist told me recently about how surprised he was when he joined the staff at the Arizona Daily Star many years ago (he has since left) and they told him that they didn’t generally cover political demonstrations or actions. Such events, he was informed, were considered to be “manufactured news” and so not worthy of coverage. As this digest of OTC articles shows, this policy continues to this day, leaving the public unaware of the range and dedicated nature of activist actions in Tucson.

Thursday, October 4, 2012: “Three activists (including one Occupy Tucson member) were arrested Thursday, October 4, in an action at Tucson Electric Power’s (TEP) Sundt Generating Station at Irvington and Alvernon. It was the first civil disobedience action in the Tucson Climate Action Network’s (TUCAN) escalating campaign to get TEP not only to pledge to stop burning coal in Tucson, but to create a plan to transition to 80% renewables by 2050.”

Wednesday, October 29, 2012: “At 1am, 2 Organizers with Occupy Public Land (Erica Johnson, Jon McLane), and 1 Supporter of OPL (Anonymous) were illegally arrested, again, on the sidewalk outside of Pancho Villa park. Erica and Jon were released the next day and the third remained in jail with a $150 bond.

Wednesday, July 11, 2012: “Occupy Tucson and Veterans for Peace activist Dave Croteau was charged by the Tucson Police Department with criminal trespass when he went on private property, rented by the military recruiting office at 2303 E Speedway Blvd., and inquired directly of the recruiting officers whether they were informing their potential recruits that one in five women in the military are sexually assaulted and that, on average, one soldier in the U.S. military commits suicide every day.”

Wednesday night, June 27, at around 11 p.m.: Thirteen protestors associated with Occupy Public Land, a group distinct from Occupy Tucson, “were arrested by the TPD for lying on blankets on the side of the sidewalk in front of the Pima Superior Court Building. This happened even though the group states that the protestors were, consistent with Section 11-36.2 of the Tucson City Code, leaving ten feet of the sidewalk free for pedestrians to pass.”

Thursday night, June 21, 2012: “Nine protestors were arrested by the Tucson Police Department on the charge of “obstructing the sidewalk.” According to Occupy Public Land the police violated the city’s own laws in making the arrests, especially Section 11-36.2, which states that the prohibition against a person lying or laying down on a public sidewalk “shall not apply to any person: (4) Who is exercising First Amendment rights protected by the United States Constitution, including free exercise of religion, speech and assembly; provided, however, that the person sitting or lying on the public sidewalk remains at least eight (8) feet from any doorway or business entrance, leaves open a five (5) foot path and does not otherwise block or impede pedestrian traffic.”

Wednesday, February 29, 2012 [This action occurred before the OTC went online and so we didn’t have a chance to cover it, but it is worthy of inclusion nonetheless—Ed]: Two local activists, members of Occupy Tucson, used direct action to shut down the Tucson transportation headquarters of G4S for several hours as a part of the F-29 Day of Action to shut down corporate members of the American Legislative Exchange Council (ALEC). The action also helped to draw attention to the presence of this secretive company in Tucson. G4S is the world’s largest security company measured by revenues and has operations in around 125 countries. With over 657,000 employees, it is the world’s third-largest private sector employer. Locally, among other things, it operates the buses used to transport those being deported or moved between immigration detention facilities and also profits from the private management of prisons.