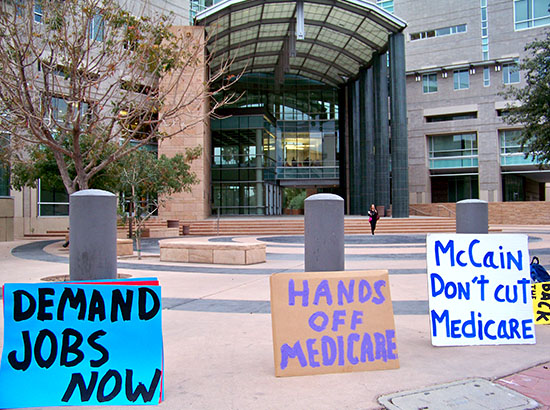 On Thursday, November 15, a small demonstration of some fifteen protestors was held outside the Federal Courthouse building downtown, where John McCain’s office is located, to demand that he “stand with working Americans and support a fair deal, not a grand deal” in the so-called fiscal cliff negotiations.

The demonstration, which had only been called a few days earlier and was pretty much the action of one organization (Jobs with Justice, with a few members of Occupy Tucson joining in), was a success insofar as it went. It must be hoped, however, that this demonstration is only the opening salvo in a popular uprising to save two of the bedrock earned benefit programs (Social Security and Medicare) from cutbacks and corporate tampering. [See “A primer to the fiscal cliff“]

And yet there have been no follow-ups to this demonstration now that two weeks have passed, nor are any, so far as I know, currently planned. This suggests that we may be in a great deal of trouble. The fiscal cliff negotiations, after all, are set to conclude by December 31, after which radical cutbacks in government services will ensue, as well as steep hikes in personal income taxes. Even given that it is quite possible that, as a part of the stage managing of this artificially created crisis, the negotiations may continue into January, the time frame for action on this issue is limited.

Based on what they have already indicated, the Obama administration will happily make key concessions on Social Security, Medicare, and other programs protecting the 99% in order to get the Republican majority in the House to go along with a nominal effective tax increase on the richest Americans.

Quite possibly the only thing that can keep this from happening is a popular uprising on the scale of the Occupy Wall Street revolt of last year. But that doesn’t seem to be developing, and there isn’t much time for it to do so. And, given the post-election stress syndrome (i.e., people being too thankful that we aren’t contemplating a President Romney to remember the extent of President Obama’s relationship with the one percent and Wall Street), combined with the Christmas holidays, I’m beginning to fear that it won’t happen.

Trade unions, where are you? AARP, we need you to get radical, fast. Occupy, if you’re going to have a resurgence, you’d better hurry up.