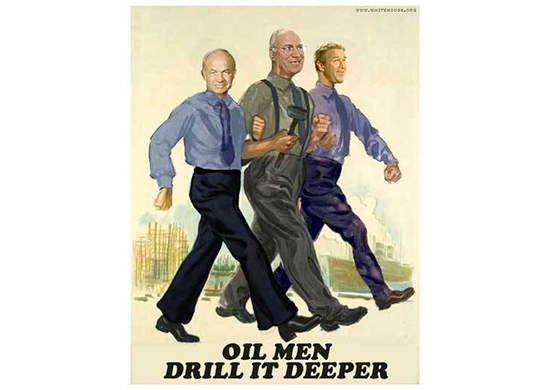 For all the talk of the one percent, there is surprisingly little discussion of exactly who constitutes this privileged group. They are all very rich, to be sure, but there are considerable divisions and differences among them: the Kennedy brothers (JFK, RFK, and Teddy), for example, clearly had different political outlooks and economic interests than the Koch brothers do. To gain some insight into at least one key portion of the one percent—the military-political elite of the American South, who are primarily backed by “extractive” capitalists–we would do well to turn to Michael Lind’s 2002 book, “Made in Texas: George W. Bush and the Southern Takeover of American Politics.”

When it was first published, this book helped break some number of Americans (including myself) out of the view that the Republican Party was still dominated by a mix of small-town bankers, New England establishment types, and the more conservative elements of the bourgeoisie. In this view, some of the more reactionary social positions of the Republican Party were simply a matter of the GOP throwing an occasional bone (e.g., abortion restrictions) to their fundamentalist Christian foot soldiers in the South, much as the Democrats bestowed an occasional favorable policy on their union supporters in the North. In the time of Richard Nixon and even, to an extent, of Ronald Reagan and George H.W. Bush, this view might have had some validity. But that was, Lind argues, before the “Southern takeover” of the Republican Party had been completed. Before the Republicans, in short, started playing by a different set of rules–with a different set of goals–than the ones we’d been taking for granted up until that time. And southern politics, especially those of mighty Texas, are the focal point for this change.

Johnson, Lind points out, was the product of an area of central Texas largely settled by progressive German emigrants in the 19th century who were, in the proper sense of the word, “bourgeois.” Believing in thrift, hard work and democracy, they gave little truck to the institution of slavery; central Texas became, as a result, something of a refuge for escaped slaves. It is in this part of Texas, Lind argues, that a proper bourgeois, entrepreneurial spirit developed (and is thus the area, for example, where Dell computers and the Texas equivalent to Silicon Valley is located).

Opposing this “Texas modernist” tradition (which Lind, a Texan, sees himself as being a part of) are the “Texas traditionalists.” Lind writes: “Although Bush’s ancestors were Northeastern, the culture that shaped him was made in Texas—a culture that combines Protestant fundamentalism and Southern militarism with an approach to economics that favors primitive commodity capitalist enterprises like cotton and oil production over high-tech manufacturing and scientific R & D.” Many elements of this traditional Texas culture predominate in West Texas, where Bush grew up, but its real power base is in East Texas, where Bush had his presidential ranch.

Historically East Texas formed the westernmost part of the old Deep South, whose ruling elite gave us, in the course of the 19th century, slavery, plantations, the Confederacy, and, finally, Jim Crow laws. This was the South that was happy to produce and export raw commodities (e.g., cotton, tobacco), first to the British Empire and then to Northern manufacturers, while its aristocratic rulers lounged on their verandas living off of the labor of their black slaves and sharecroppers. Time has moved on since then, of course. The infrastructure improvements brought on by the New Deal, the legal and social changes forced on the Deep South by the civil rights movement, Voting Rights Act, court rulings of the 1950’s and 60’s and the growth of the military-industrial complex since World War Two have certainly changed the South. But Lind argues that they have primarily changed the form and not the basic substance or instincts of the elite that controls this other Texas, and in many respects now dominates the politics of the country: “As fate would have it, at the beginning of the twenty-first century… leadership of the most advanced technological economy and the top scientific society on earth had fallen to a politician … from the part of the country with a primitive extractive economy.”

To discover the political and social instincts of this elite we need turn no further than to what Lind calls “The Confederate Century,” the nearly one hundred year period from the end of Reconstruction in 1876 to the passage and enforcement of civil rights legislation in the mid-1960’s. The view isn’t an encouraging one. The Deep South during this time was essentially a one party state that paid little more than lip service to the ideals of bourgeois democracy, a place where the “Dixiecrats” maintained their political control of the South by a variety of methods. These included barring African-Americans from voting by means of poll taxes, smear tactics against their opponents, and bribery. When these failed they resorted to more direct means, up to and including political assassinations (most notoriously in the form of lynching) carried out by what we would now call “death squads” or “paramilitary” groups (such as the Klu Klux Klan). If a Republican party taken over by southern conservatives, Lind seems to be telling us, seems a little fuzzy on the concept of multi-party democracy, there is a historical reason for it. And if elements of this same Republican Party seem to sanction extra-legal violence, whether it be attacks on abortion clinics (a result of the important role of Protestant fundamentalism in their outlook, which Lind also details in the book) or intimidation of election officials, there is strong precedent for it. Nor should we be surprised at the current Republican crusade to spread the low-wage, low-technology economic model prevalent in the South to the whole of the country, as we witnessed in the recent legislative putsch that made Michigan a right-to-work-for-less-pay state.

In an attempt to try and give us some idea how these dangerous and reactionary elements might play themselves out, Lind concludes his analysis of the politics of the modern-day Republican party by placing them in a broader historical context. He first cites the early 20th century economist and sociologist Thorstein Veblen, who was wondering how, in pre-World War One Germany, “one of the world’s most advanced industrial nations could be ruled by a reactionary, aristocratic caste like the Prussian Junkers.” Veblen theorized, according to Lind, that “the very success of the German government in using state action to help the German economy catch up with that of Britain, the source of the industrial revolution, had produced dangerous consequences for German society and the world.” Lind suggests that if we substitute “the American South for Imperial Germany, and the propertied, military-minded Southern ‘chivalry’ for the landed, militaristic Prussian Junker elite,” we have a suggestive analogy. Or, to put it another way, the U.S.A., at the beginning of the 21st century, is experiencing something similar to what happened to Germany (and Japan), in the last century, when “the industrialists of the Rhineland subsidized … imperialism of the boot-clicking, monocled Prussian Junkers [and] the industrialists of Imperial Japan created wealth and machines, which the samurai militarists then used in an attempt to create an empire of conquest and slavery in mainland Asia.” In our case “the wealth and the new technologies created by Silicon Valley and other nodes of high-tech capitalism in the United States are being put to imperial uses by a military-political elite of rich Southerners and their allies who think of world politics in pre-modern terms of extraction (the hoped-for American conquest of Middle Eastern oil fields) or the exploitation of politically powerless foreign labor (the sweatshop approach to globalization and immigration).”

Though Lind’s book has since fallen into obscurity, it remains a worthwhile read if we want to understand what a leading, if not in fact dominant, grouping within the one percent is up to. It also challenges us to think more deeply about the fact that the one percent is not a monolith, and reminds us that how their internal disputes play out and are resolved has an impact on us all.