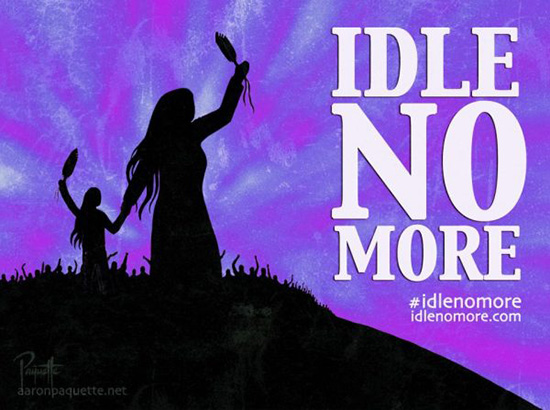 View #IdleNoMore Events in 2012 in a larger map. Google Map by Tim Groves

A movement is sweeping across Canada that has ignited over 100 rallies, blockades, flash mob dance circles and teach-ins. The actions are widely reported online to have been started by four indigenous women activists participating in a teach-in in November, and have gone viral on Facebook and Twitter, organizing under the hashtag #IdleNoMore. They coincide with Attawapiskat Chief Theresa Spence’s hunger strike which began December 11. She demands a meeting between First Nations leaders and Prime Minister Harper and the Queen’s representative in Canada. They also coincide with actions in British Columbia by the Unis’tot’en clan of the Wet’suwet’en Nation to halt pipeline projects across their territory.
Momentum has been building online for weeks and tens of thousands of indigenous activists and protestors have been mobilized throughout Canada, the US, even Europe. They began in protest of a government omnibus bill C-45 and have grown to encompass broad demands for indigenous sovereignty.
For more info, go to the Idle No More Facebook Community Page.