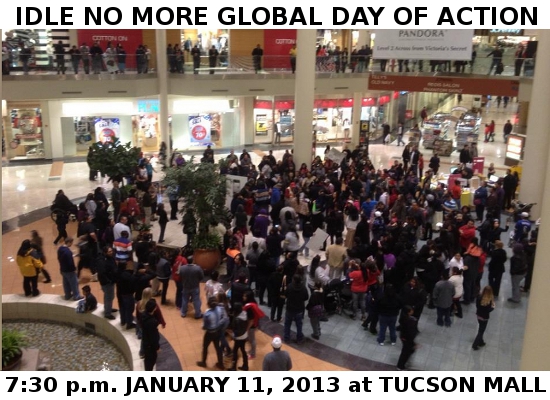 Over 200 people gathered around the throbbing drums and horns echoing through Tucson Mall on Friday, January 11, 2013 at 7:30 p.m. in unity with the Idle No More Movement’s call for a Global Day of Action. In what has become a signature of a movement only weeks old, the flash mob round dance at a mall was the result of a grassroots organizing effort using word of mouth and social media.

“Now, our smoke signals are texting,” said Rupert Encinas, a Tucson resident and elder among the Tohono O’ohdom.   Encinas said, “it is happening all over.”

Censored News has pictures from around the world and Charlie DeJolie was onsite in Tucson and provides video footage.