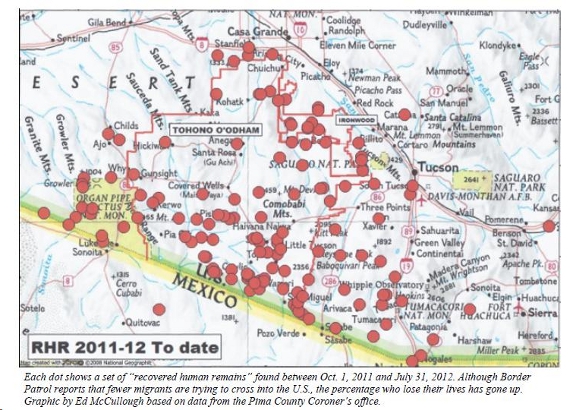 Tucson, AZ- A hidden camera video released by Tucson-based humanitarian organization, No More Deaths, shows an agent of the U.S. Border Patrol removing clean blankets and food intended for migrants in distress.  The January 8 video captures a Border Patrol agent on a desert trail near the town of Arivaca, Arizona, about 12 miles north of the international border.  The agent stops, opens a plastic bag surrounding dry blankets and canned food, inspects the contents, and then leaves, removing the life-saving provisions.  Between January 9 and 15 temperatures in southern Arizona dropped to historic lows, and the blankets and food are provided by humanitarian organizations to prevent death and illness due to these extreme temperatures.

Says No More Deaths Medical Advisor, Dr. Norma Price: “We know that hypothermia can be equally dangerous as dying from heat stroke in the summer.  This month has been one of the most severe that Arizona has ever had.  There is no question, people are crossing in the desert and their lives could be saved if they were given blankets and warm clothing.” During Fiscal Year 2012 the remains of 178 people were recovered from the southern Arizona desert.

Agents must not have received the memo

In May 2012 another hidden camera video caught Border Patrol agents vandalizing caches of life-saving water.  Video of this incident aired on July 20, 2012 on PBS’ Need to Knowprogram, as part of a series highlighting abuses committed by agents against migrants in their custody.  In response to this incident, then-Sector Chief Rick Barlow sent a memo to all agents instructing them to respect humanitarian workers and provisions.  Despite this memo, volunteers have seen consistent and widespread vandalism and removal of life-saving water, food and blankets.  See photos of vandalism from January 15, 2013.

In an effort to prevent the cruel deaths and suffering commonplace in the U.S./Mexico borderlands, No More Deaths and other humanitarian aid organizations provide food, water and emergency medical aid to individuals in distress.  It is shocking to see Border Patrol agents sabotaging these efforts, instead of helping to respond to the humanitarian catastrophe that U.S. border enforcement strategy has itself unleashed.

No More Deaths is a grassroots, all-volunteer organization that provides direct humanitarian assistance to women, men and children lost, injured or ill while crossing through the Arizona desert.  More than 6,000 people have died along the border since 1998.  In October 2011 No More Deaths published A Culture of Cruelty, which documented thousands of abuses, including assault, humiliation and medical neglect committed by Border Patrol agents against individuals in their custody.  The report also includes recommendations for clear, enforceable custody standards with community oversight to ensure compliance.  Read more at www.cultureofcruelty.org