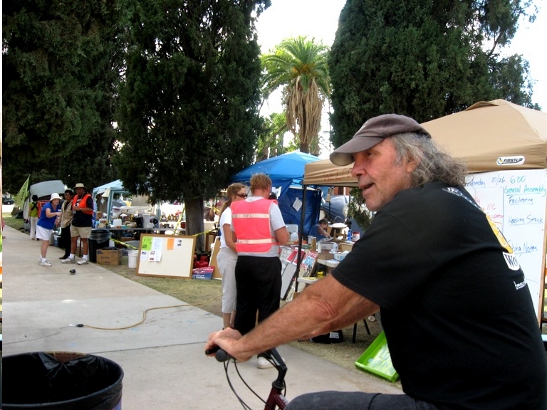 A polemic from an original Tucson Occupier—Ed

Going on two-years, NOW, We came together in Public Spaces to work out precisely why we were (and still are) losing America the Beautiful. The stolen Americas of the First Peoples that we inherited in the USA through deceit and cheating of some criminal families has come home to roost! But, NOW on us Working Folks, by the same silk-tied, business suits. – á la 21st century-style.

The thousands of Us most severely impacted by corporate greed made time to camp together in order to dialogue about how to protect Ourselves from an ongoing economic/environmental/privacy collapse. What a shock to experience that so many others held similar unmet concerns about so many things wrong! We never meet before because of a rat-race life that separates Us from the time to meet and get to know one another. Work schedules, distances, mass media dis-information, racism, economic collapse, homelessness and stone-cold fear of speaking up STILL keep us apart. I am an Occupier. I Occupy My Life, My Home and My Rightful Place as a Citizen and Honorable Human Being. I am Free to Speak without fear and say No to madness!

The “1%” richest of so-called Americans have been criminally stealing like crazy, but “legally,” from Our Economy these past decades. While polluting and War-profiteering, the 1% NOW “own” Our Commons. Everyday, cozy relationships of so-called “think tanks” and political parties create secretive, backroom deals of cooked-up political deceit and lies to sling at us 24/7. This as We Working People suffer the waste of Our Oil, Water, Soil, Air, Money, Food and lack of protection from our Police and Judiciary, (to name a few.) All this in the name of “security.” Who do these “owners” of America think they’re dealing with? Their little playthings?

These sociopaths have willfully defunded and politicized Our Public Schools. These ingrates have prevented a badly needed National Health System (Medicare for All – instead we get privatized, AGAIN!), while privatizing prisons into profitable rackets and plundering mineral deposits throughout Creation. These profiteers are relentless and destructive in their resource extraction methods. Lookup, sometime, “fracking” or mountain-top removal for starters.

International banking fraudsters and their money-laundering, big-banks(ie WellsFargo, BOA, Chase, GS, Citi, etc) together, have hoarded huge $trillions$-sums of cash overseas and moved it and US manufacturing out-of-country to avoid participating as a contributing tax-paying citizen of America. Though, good riddance to polluting-industries like the petro-chemical giants, the jobs they represented need to be recreated back here in the USA. BUT as non-polluting,”Green” Service Jobs: like infrastructure building and  Restoration of Our Dying Environment.

The 1% are crime-families that have used every odious ploy from larceny to murder in order to achieve their goal: leave America a burned-out third-world basket case. Their idea beckons a poisoned, broke and uninhabitable North America while they watch from afar, say: United Arab Emirates. These “owners” of everything based on petro-cash and consumerism produce seven things in abundance: stupidity, insanity, pain, suffering, scarcity, fear and chaos. Almost Apocalyptic of them, Eh?

The so-called debt is actually the accumulated monies owed to Our Treasury from these crooks who have fraudulent off-shore tax-evasion schemes.  Along with their unjust tax-cuts,  makes the whole mess as obscene as can be. These criminal 1% might as well be getting away with murder! Since the five decades after President Eisenhower, they have hoarded and thieved enough to own 50% of Everything. Doing the math, that leaves half for the 330-million of us and half of say 60-trillion is 30-trillion for the 3.3-million of them. Add a wrecked Economy and an un-livable Planet as a goolish bonus. We, who actually ADD positively to society own, on average, $90,000 per person. The 1% “people,” own $9-million-a-piece for every man, woman and child = $90-million for Mom and Dad and eight kids! Not to mention their bold-faced ignorant pillage of Our precious Environment – The One and Only that We ALL need for Life. The 1% must go the way of the Dodo or WE ALL WILL!

The Occupy Movement grew from the grassroots spontaneity of good people who have been wronged. We intend to Get Out The Truth and Force Government to Act With Honor for You, Me and all Our People in the Name of The Constitution of the United States and The Universal Declaration of Human Rights. Our so-called “Free Press” does not report who and what the Occupy Movement truly is. Because, it’s You and Me and any any other US Citizen who adheres allegiance to Our Constitution! Instead, the corporate-controlled cable tv spews pretty lies and trumped-up assumptions ordered by the dominant bankster-owner-class. We, the Working Americans, are under assault by a few psychopathic and lazy cheats who make money by either owning or producing nothing for the Common Good. We need to replace the cruelty of these 1% greed-heads and their co-conspirator stooges in Congress with Conscious Servants of the People! Honorable Representatives must reverse – !AND QUICKLY! the murderous attack on  our Life-sustaining Environment! The palpable disdain of the 1%, (the so-called “job creators,”) for The Working Class may fly at the “private country club” or the closed-door boardroom sessions. But not containing this ugliness, as with their $obscenely-funded$ so-called “tea party”, or better, tea baggers!? How’s that working for you job creators?

Time is ripe for Occupy and Others to chase down the cheater-liar corporate elites with Our Palpable Disdain, say for starters  teaming up with: 350.org” to stop the xl tar sands greedsters. And then, let’s work concurrently, with the disenfranchised, the thirty-million Working Poor, many of whom go hungry or without healthcare, AND get to the streets! Peacefully DEMAND raising the minimum wage to $11/hr! (An idea put forward by Chris Hedges, this February, ’13.)