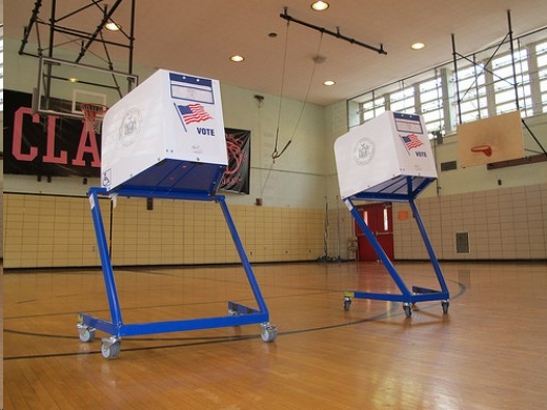 Disclaimer: I am not advocating that people stop voting. Using one of the few options given to us, voting, does not mean the system works.

U.S. elections are not democratic. Our choices are limited and the elections are dominated by corporations that work exclusively to guarantee their profits. Our corporate government shovels the profit from our labor to corporations, leaving only enough for workers to prevent a revolution but not enough to empower them. The only way this will change is if we end the election system as we know it.

We are fooled into believing that elections present long-term solutions to our problems and that we can change things through voting. Time and time again we have seen that elections only lead to incremental change and not systemic change that would keep us from suffering during times of economic boom and bust. These economic cycles are caused by periods of corporate speculation and the failure of the latest bubble such as savings and loans, dotcoms, and housing. With the system as it is, the lower classes continually pay for the gambles of the rich.

Making our society more democratic means we must first work around the elections. Democrats and Republicans get millions of dollars in donations from corporations and wealthy individuals to NOT change the inequality in this nation.

There are many jobs that benefit people directly including those in education, health care and other public service. You can also volunteer working as a big brother or big sister, coach little league, join your neighborhood association, volunteer at a senior center, volunteer to walk dogs, and so on. That makes a difference. Everything you do that does not cause harm has a benefit. Will it change the world? Maybe, maybe not. However, our elections, as they are, certainly won’t change our broken system.

There are some changes to our current electoral system that would make it democratic. First, we must throw out the Electoral College. The College gives too much power to small states and ignores the will of the people. The Electoral College gives votes to electors from each state based on the population of those states (representation in the House of Representatives), plus two for each Senator.

“For instance, each individual vote in Wyoming counts nearly four times as much in the Electoral College as each individual vote in Texas. This is because Wyoming has three (3) electoral votes for a population of 532,668 citizens (as of 2008 Census Bureau estimates) and Texas has thirty-two (32) electoral votes for a population of almost 25 million. By dividing the population by electoral votes, we can see that Wyoming has one “elector” for every 177,556 people and Texas has one “elector” for about every 715,499. The difference between these two states of 537,943 is the largest in the Electoral College.” See full article at fairvote.org

There is also a problem within our winner-take-all system and the electoral college. Some states are solidly Democratic and others solidly Republican, so it makes little sense for candidates to campaign nationally. “Since all but two states allocate their votes via a winner-take-all method, there is no reason for a candidate to campaign in a state that clearly favors one candidate. As an example, Democratic candidates have little incentive to spend time in solidly Republican states, like Texas, even if many Democrats live there. Conversely, Republican candidates have little incentive to campaign in solidly Democratic states, like Massachusetts, especially when they know that states like Florida and Michigan are toss-ups.” (ibid)

Like the Electoral College, the Senate gives too much power to less populated states and is very undemocratic in the way they vote on laws. You can be elected Senator from Montana with about 250,000 votes, but it takes about 6.5 millions to get elected Senator in California.
However, Senators from the less populated state of Montana have the same amount of power as Senators from California even though California Senators represent almost 37 million more people than Montana Senators. This gives an inordinate amount of power to states with smaller populations and is undemocratic.
Proportional representation systems are used all in 21 out of 28 Western European nations, in parts of South America, New Zealand, Australia and elsewhere to determine national leaders. Nations that use proportional representation have higher voter turnout. With proportional representation, parties that reach a national threshold of votes, typically 5%, get seats in a nation’s legislative body. In such a system, a wider variety of political opinions are represented. In the U.S., our two major parties currently decide how our elections are run, and they won’t abide the competition that arises with proportional representation. PR would also end the undemocratic process of Gerrymandering because representatives would be determined proportionally in each state, not by ungainly districts determined by the two major parties.

(IRV) or ranked choice voting would also increase the power and choice in our vote. In an IRV voting system, one votes and ranks their candidate preferences. On many ballots in the U.S., there were four candidates for president in 2012. However, you could only vote once for each office, and that means you might have to decide between two candidates that you don’t like, Romney or Obama, since the third party candidates have almost no choice of winning. IRV allows you a first place vote for the candidate of your choice and a second place vote for the “lesser of two evils”, the Democrat or Republican candidate, and so forth. If your candidate gets the fewest number of votes, they will be eliminated and your second choice will be counted. For example, if Jill Stein is your favorite candidate, you can give her a vote because your second choice, Barack Obama, will get your second choice vote if she is eliminated in the first of second round of vote counting. That would avoid the “wasted vote” syndrome so many of us live with.

Ultimately, we need to rid ourselves of elections as we know them, for elections are set up to keep elites in power at the expense of the nation and people. Random Selection Representation (RSR) with rotating office-holders through a lottery system of qualified citizens within each district is a better system than the elections we currently have. The benefits of such a system would far out weigh the challenges.

RSR should replace our elections. We know that laws passed to control campaign financing fail to reduce the impact of corporate and large money donors. Our elections fail to create a Congress that is responsive to the needs of the people. We couldn’t do worse by randomly selecting qualified people who want to serve than we do by voting. In fact, we might do much better.

Those selected to Congress, state legislatures, and other offices through a lottery, would not be beholden to special interests and would more easily get though the gridlock in Washington, D.C. and states all over the nation.

By having an RSR system of office holder selection, corporations, unions, PACs and other special interests would not be able to control legislation to the extent that they do today. Obviously, strict laws against bribery would have to be passed and some education of new legislators would be needed. As long as Congress has a staff of lawyers to help write laws into legal language, there is no reason average citizens could not better represent themselves and the nation better than a pay to play Congress full of wealthy ideologues that are beholden to large donors. In addition, there would still a professional court to protect against unconstitutional law-making.
Certainly, there would be a myriad of issues to address with this system. Some people will complain about a removal of choice. But what choice do we really have to select our Congress as it is? Very little.

What if we get a crazy, uncooperative person in Congress? I would say we have that now. However, the same ability to impeach and remove office holders would be in place.

What if we have unintelligent people selected? A majority of Congress is of average intelligence now. If those selected were not mentally competent, if they were mentally challenged in some way, they would be selected out in the qualification process.

But it is not democratic!”, some might complain. This system is not any less democratic than what we have now, and it removes corruption from the process

International relations, an area where experience really matters, could be a major hurdle. However, we have the strongest military in the world and a well trained diplomatic core that would help with this transition. A benefit of new leadership in international relationships is fresh eyes and an ability to create new solutions. Again, this is where certain qualifications, vetting or training might have to be addressed for the office of the presidency. Or, presidents could also be selected from our citizen Congress after their second term-limited time in Office.

Congress has failed to address our issues time and time again due to ideological bickering and intransigence. With RSR, Congress would not have to spend at least 30% of their time fundraising as they currently do. Not only is this a waste of time, but it makes Congress beholden to large donors and not their constituents, unless they are also large donors. With RSR, campaign finance would not be an issue, and the new citizen Congress could spend that time learning about how Congress works and discussing issues without having to think about their donor base. Lobbyists could still talk to Congress, but they would no longer be able to threaten a removal of campaign donations if they do not get their way.

It’s clear that Congress and state legislatures have failed in their duties to our nation. It’s time to put the people in charge.