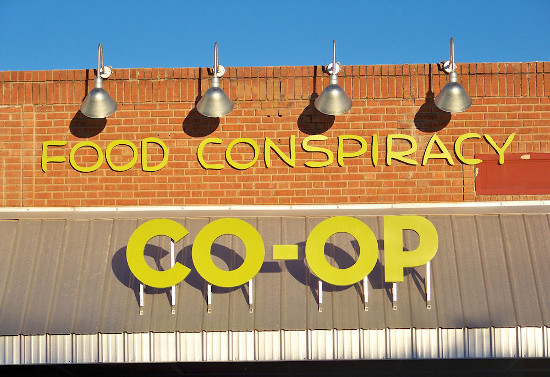 It is hard to believe, after its recent renovation, that not too long ago the Food Conspiracy Food Co-Op on 4th Avenue was a hippy kind of place. A place where vegetarians, vegans, food activists and the like went and felt at home. Where the food products which might contain GMOs were marked with a question mark, where the dairy product manufacturers were ranked (one cow for worst, five cows for the best) for their treatment of the livestock, where the country of origin for the bulk bin items were indicated on the bins themselves, and where a certain number of the people working in it were volunteers. It also had the improvised quality of a place that was making do with its limited space. Products were placed where they were as much by tradition and immediate practicality as they were by any kind of overarching ergonomic, Taylorized concept of the most efficient use of its space.

Now, however, the Food Co-Op doesn’t seem much more welcoming of the ethnic hippy, alternative-type or food activist than large corporate chains such as Trader Joe’s or Whole Foods. Certainly the last vestiges of “disorder” have been removed: the community bulletin board is no longer the sprawling affair that it once was, the single rack allowed for publications features a similar selection of magazines as to what you would find at Whole Foods, and no longer features such radical publications as the Earth First! Journal (Adbusters Magazine being the only exception to this) or, quite significantly, any room for community-oriented publications such as the Occupied Tucson Citizen. Even that hallmark of differentiation between alternative and mainstream supermarkets—a nickel refund if you bring in your own bag—is now gone.

But it is also true that the “Food Conspiracy” Food Co-Op is now more consumer-friendly, more streamlined of an operation and, no doubt, more profitable. Much of the expansion that resulted from the recent renovation went toward putting in an eat-in deli section (in which we weird, eccentric vegetarians are assured that there will “always be a vegetarian option”), and much of the rest of the expansion of the retail space was dedicated toward increasing aisle size and product offerings for the burgeoning off-campus student population living around 4th Avenue.

And, no doubt, there are other advantages as well. But before my misgivings are simply dismissed as those of a disgruntled purist, please keep the following in mind: it isn’t a question of the Food Co-Op being a bad place now (it isn’t), or a place that should somehow be boycotted (it shouldn’t, and further they deserve credit for not moving to a mall, which they have considered doing in the past). Nor, however, is it a question of it being a failing (as some might argue) of yours truly, a “co-owner” of the Food Co-Op who doesn’t go to meetings and so hasn’t voiced his objections to what has been happening — the fact is, I’ve been too busy going to other meetings to add this one into the mix.

It is rather a question of the ever-growing permeation of corporate culture and norms into every aspect of our lives, so that every consumer convenience, every increase in efficiency, every additional streamlining and standardization of the world around us (we could also say here sterilization and homogenization) is to be accepted because that, increasingly, is what we want and expect. Because Consumer Woman and Consumer Man, even of the alternative, counter-cultural variety, want to do their shopping (and this is primarily what they do, they shop) quickly, comfortably and easily, even if it means doing away with the actual counter-culture and replacing it with the affect of one.

How this corporatized norm is permeating other aspects of even the counter-cultural remnants here in Tucson will be a topic of further articles. So stay tuned… and beware of any formerly alternative but now corporatizing entities you might in the meantime encounter.

10 thoughts on “Has the conspiracy gone out of the Food Co-Op?”