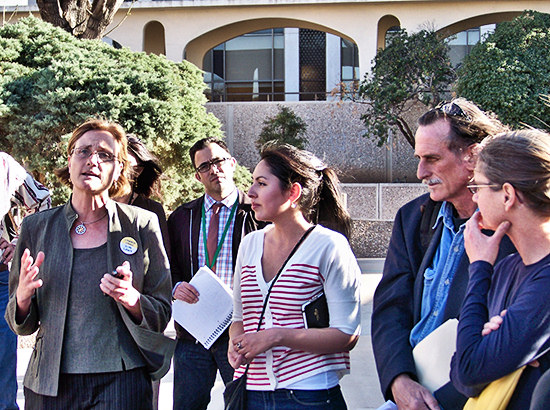 As I first approached City Hall to cover the February 5th City Council study session about what to do about the Ronstadt Transit Center, it seemed as if the issue had finally gotten its day in the media—all the local news stations had trucks parked in front of City Hall and KOLD’s Bud Foster could be seen going inside.

But appearances can be deceiving. The media was actually present to cover another portion of the study session—requiring background checks at Tucson gun shows—and gave the Ronstadt issue little attention. In fact, I soon learned that the Tucson Bus Riders Union’s plan to pack the study session with supporters had fallen victim to scheduling, as the discussion on the issue had been moved from 4:00 p.m. to 3:00 p.m., so only a few from the union were present.

Nonetheless, the news for bus riders was not bad. At a rally following the study session, Brian Flagg of the Bus Riders Union perhaps summed it up best when he declared that “we’ve won the battle, but there’s still a long way to go, and a lot to do, before we defeat this thing.”

The “battle” that Flagg was referring to was the concern of the Bus Rider’s Union that the transit center would be moved out of downtown, like the Greyhound bus station had been before it; the “victory” was the fact that this option had been effectively declared dead at the study session.

The continuing concern of the bus riders union arises from the use at the study session of a most worrisome term for the ninety-nine percent; namely, that this could be a “win-win” situation. Especially when this is combined with the term “multi-use” and descriptions of the Ronstadt Center as “one of the most underutilized pieces of land in downtown Tucson.”

How it is that a place through which 27,000 people pass daily in our otherwise quiet downtown could be considered “underutilized” explains the union’s concerns: it is underutilized commercially. And this leads us to the issue of it becoming “multi-use.” One could argue that the Ronstadt Center is already multi-use, in that it was designed to be convertible into an open plaza for special public events such as Second Saturdays downtown—which it, of course, is currently being used for.

But, in this case, multi-use means mixing public use with private use, most likely in the form of allowing the Congress Street section of Ronstadt to be developed into retail space. Indeed, an architect has already been contracted to look into commercially oriented multi-use possibilities at Ronstadt, and the city intends to do a survey and hold public hearings into the matter.

So it would appear that much of the battle here would seem to be over who manages to define “win-win” and “multi-use”: the business-oriented Downtown Tucson Partnership, or the Bus Riders Union, neighborhood associations and storefront businesses. If “win-win” and “multi-use” will come to mean a severely truncated, back-alley space for bus riders and a Starbucks and T.G.I.F.’s along Congress Street, then we will know who has won the fight over what to do with the Ronstadt Transit Center.