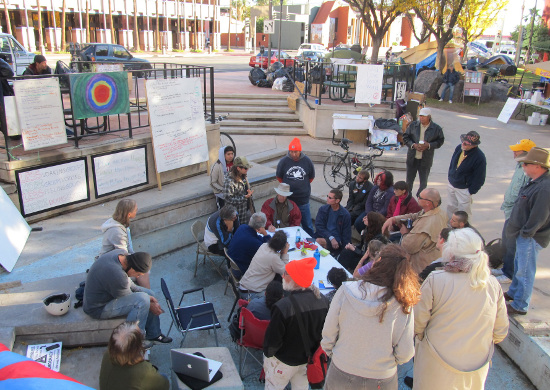 Many think the Occupy movement is history as it lacks the high profile it enjoyed in 2011 and early 2012. Whether Occupy returns to its glory days is not the most important question, but rather the fate of the struggle Occupy brilliantly helped raise to a new level. However before looking forward it is important to first look back to appreciate the interconnectedness of events.

Back in 1999 a few of my friends left Tucson for Seattle to take part in a protest against the World Trade Organization. Few could expect what a huge splash that would end up making. I decided to attend the next big protest in Washington, D.C. in April 2000 to barricade the meetings of the IMF and World Bank. There I was introduced to the “spokes-council” model for consensus-based mass meetings, which later evolved into the “general assembly” meetings used by Occupy.

Mass protests continued for a time around the world targeting international financial and trade institutions. In 2003 protests were held in Miami during negotiations for the Free Trade Agreement for the Americas (FTAA). The shocking level of police brutality unleashed on protesters was the product of law enforcement’s “Miami Model” which included large-scale pre-emptive arrests. Huge marches were held around the world to try to stop the pre-emptive invasion of Iraq and thousands pounded the pavement in Tucson. Turnouts were so large everywhere that it seemed like the peace movement could win, but the Bush Administration was unmoved. The Tucson Peace Action Coalition did a great job as the lead organizer locally for these actions.

The next big splash I felt lucky to witness came in 2006 when millions poured into the streets around the country on May 1–including Tucson–to protest changes in U.S. immigration policies. Later that day I went downtown to watch the public school students who had marched there after walking out of classes. The energy was electrifying. Schools had even sent buses to pick them up. Marches continue to be held in Tucson on May 1 organized by the May 1 Coalition. The immigrants’ rights movement later shifted its focus on stopping Arizona’s SB 1070 law and I rode a bus up to Phoenix in April 2010 to march along with 150,000 others. Of course the government shifted its tactics on dealing with this movement. In 2012 a record 400,000 were deported from the U.S. 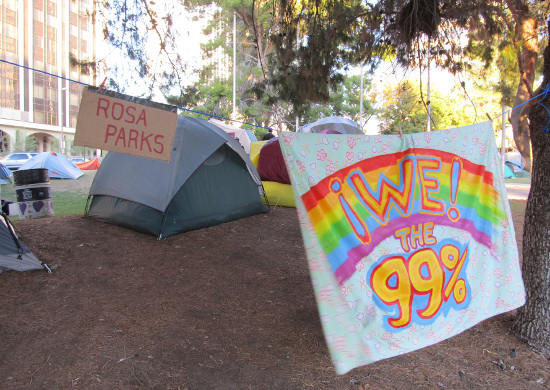 In 2011, a draconian level of brutality would be unleashed on peaceful Occupy protesters. Police violence against Occupy Oakland perhaps tops the list, with the pepper spraying of Occupy Wall Street participants and students at UC-Davis among other notable incidents. Many of the Occupy encampments were evicted with excessive use of force.

The Occupy movement was one of the most diverse and unique movements I was fortunate to have witnessed in my lifetime. I ended up visiting ten encampments throughout the southern U.S. and have written about those inspiring experiences in my blog Hobo Dispatch. Occupy Tucson was certainly among the most dynamic groups with the evictions of three different encampments and over 700 citations and arrests.

It is also important to look at the rise of Occupy within the context of the international struggle. The December 26, 2011 issue of “Time” magazine was the person of the year issue naming “The Protester” as the winner and is a must-read (available online). The opening of that feature wonderfully captured the moment: “No one could have known that when a Tunisian fruit vendor set himself on fire in a public square, it would incite protests that would topple dictators and start a global wave of dissent. In 2011, protestors didn’t just voice their complaints; they changed the world.”

In conclusion the international struggle is as active as ever and despite the diminished profile of Occupy in the U.S., the movement is far from dormant. Another large splash will occur sooner or later, seemingly coming out of nowhere like the Battle in Seattle, the 2003 peace marches, the 2006 pro-immigrant marches, and the hundreds of Occupy encampments that sprung up in cities large and small.

But of course nothing comes out of nowhere and thanks to Occupy many more are now active in the struggle for social and economic justice. A friend who’s part of Occupy Gainesville summed it up well, “Hey if you’re not sitting around on a couch watching TV, you’re occupying!”