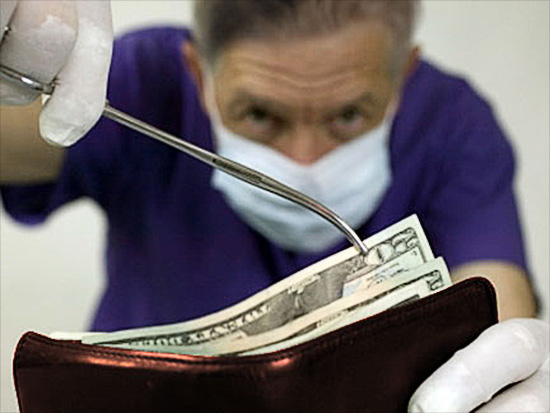 The Affordable Care Act (ACA), commonly known as “Obamacare”, does not adequately address the rising costs of healthcareand insurance. It retains the market-based insurance model responsible for a substantial portion of the rise in costs and does not have a long term plan to deal with our aging population. In fact, the ACA is one big give away to insurance companies.

As a Baltimore Sun article reads, “Whether the individual mandate is a fee or a penalty or a tax, it fails to address the structural inequities of a healthcare system that supports huge for-profit insurance companies…the money will go to maintain this arrangement, guaranteeing that healthcare costs rise, that insurers prioritize profits over care, and that deductibles, co-payments, and co-insurance continue to impoverish our family members and neighbors.” Another thing is certain: Congress won’t give up its generous health benefits even as they mandate the rest of us buy insurance that will keep rising in cost. As long as we have profit-based insurance and healthcare model and not wellness-based model, this will not change.

The Physicians for a National Health Program website agrees, “The Affordable Care Act fails to address the cost of American health-care delivery because the central feature of Obamacare is the forced reliance on the private health-insurance-industry business model, known as the individual mandate. Private health insurance is the most wasteful way to pay for healthcare ever invented, with excess administrative costs in the United States of about $400 billion per year…” and the incentive model central to the ACA will “cost an additional $700 billion per year in wasted payments.”

Human needs such as healthcare should not be beholden to insurance market manipulation. In a supposed free market, capitalists compete to see who can control the market for goods and services. Once a corporation or trust (a group of jointly run companies) controls a major share of a market, they use non-competitive practices to maintain their advantage in pricing and market share. Besides colluding to control the market, the health insurance industry has a long standing trust exemption to maintain its huge profits.

Representative Fazio of Oregon explains this trust exemption, “Right now, it is legal under federal law for insurance companies to collude to drive up prices, limit competition, conspire to underpay doctors and hospitals, and price gouge consumers…We must address the rapidly escalating cost of health insurance premiums…”  The ACA does little to stop health insurance companies from colluding to drive prices up. The trust exemption for health insurers should have been addressed before the political capital was spent passing the law.

The cost of insurance is a big driver of healthcare prices as is the high cost of prescription drugs. Pills that contain less than two dollar’s worth of active medicine per 100 tablets sell for over $100. Celebrex, an anti-inflammatory drug, has .60 cents of active agents in it but costs $130.27 for 100 tablets. Prescription Claritin costs .71 cents for the ingredients and sell for $215.17 per 100 tablets. This is a clear case of price gauging. A more complete list compiled by Sharon Davis and Mary Palmer at the US Department of Commerce can be found at the following link: http://rense.com/general54/preco.htm

Pharmaceutical companies say they have to charge high prices for their patented medication, but that is not true. They claim to spend $500 million to research each new drug, but that cost is highly subsidized by the U.S. government. Moreover, their research costs can be used as a tax write-off. Even when the government funds research for some medications, private companies hold the patent. “A simpler measure – also derived from data provided by the industry – suggests that after-tax R&D costs ranged from $57 million to $71 million for the average new drug brought to market in the 1990s, including failures.”

And now Obama has increased the largesse. “Our “socialist” president is doling out welfare payments—unfortunately, to one of the world’s most profitable and socially corrupt industries: pharmaceuticals. Barack Obama’s administration is ponying up $1 billion to create a new branch of the National Institutes of Health (NIH) designed to help Big Pharma develop new drugs.”  Taxpayers are supporting the price gauging drug companies that make huge profits. Moreover, the “research” is often to make simple changes to drugs already on the market; they can change a molecule, and call it a new drug.

The market for drugs and health insurance is not competitive. In this market-based model, the wealthiest, most powerful companies will cooperate to stay at the top. For example, when Big Oil is challenged by solar and wind power, they will cooperatively lobby to keep their oil industry subsidies and to slander and keep out the competition from greener energy sources. Then, when the competition is beat, they will again compete against one another. By controlling the so-called “free market”, oil companies continue making billions of dollars a year. The same is true for the health insurance markets.

All markets are regulated, and the companies and industries that can get the more favorable regulations from the government have a competitive advantage. Health insurance companies invest generously in elections and lobbying to make sure their market is regulated as little as possible. According to Open Secrets online, the top two lobbying industries for the last 15 years are Pharmaceuticals/Health Products, over $2.5 billion and Insurance, over $1.8 billion. That’s for lobbying only! In 2012, the health industry also contributed $57,015,177 to federal campaigns. How market driven can the price for healthcare and insurance be when 1) these companies are exempt from anti-trust laws, 2) they pay billions of dollars for access to Congress through lobbying, and 3) they spend tens of millions on political campaigns to those that are supposed to regulate the industry? It’s no wonder ACA doesn’t even attempt to address health insurance and pharmaceutical industry pricing with anything but market strategies that are manipulated by the industry.

Aetna CEO Mark Bertolini said, “In some markets,” increases in premiums could “go as high as 100 percent.” To save money, we need to cut out the insurance companies and go straight to a single-payer plan. Insurance companies don’t care about your health, so we shouldn’t add to their wealth. “The entire debate in the White House and Congress is framed from the standpoint of cutting costs, rationing care and defending the profits of the giant healthcare conglomerates.” The problem is seen as a fiscal issue, not a delivery or profit taking problem. “This underscores the main opposition of the political establishment to any new government-run program: that it would cut into the profits of the insurance companies, health-care corporations and pharmaceutical companies.”

The chief executives at the seven largest publicly traded health insurance companies earned from $6.1 million to more than $20 million in total compensation in 2010. Moreover, health insurance companies made $7 billion in profit in 2011 off or tens of billions in revenue. The $7 billion, plus the exorbitant salaries of CEO and managers, could buy a lot of healthcare and insurance for the people. Until we take profit and the monopolistic insurance market out of healthcare, no plans, or managed care, or acts, or Obamacare (ACA) will work to reduce costs and cover everyone who needs healthcare and insurance in this nation.