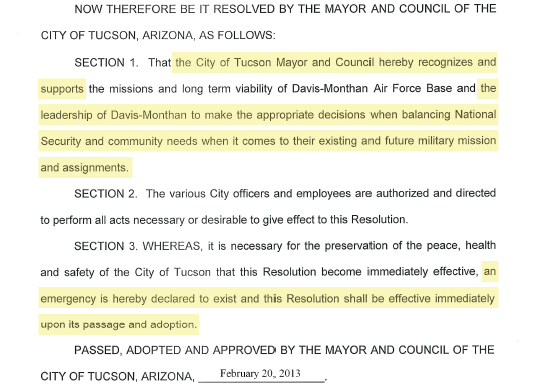 Members of Occupy Tucson and Tucson Forward made a forcible presentation against Resolution 22006 at the March 5 City Council Meeting. Seven of the ten members of the public who spoke out during the public comments section of the meeting (4 from Occupy Tucson, 2 from Tucson Forward, one not citing an organization affiliation) expressed, often at length, their opposition to the resolution.

The city councilors appeared surprised by the angry protest against the resolution which they had unanimously passed two weeks before; in response, Councilwoman Karin Uhlich (Ward 3) instructed the city attorney to look into some of the questions about the resolution that the protestors were raising, especially as to whether the wording in Section 1 of the resolution cedes any of the city’s authority in the matter to the Air Force (i.e., “That the City of Tucson Mayor and Council hereby recognizes and supports…the missions and long term viability of Davis-Monthan Air Force Base and leadership of Davis-Monthan to make the appropriate decisions when balancing National Security and community needs when it comes to their existing and future military mission and assignments”), and whether there might be some clarification in the city’s use of the “emergency” provision in some 99 percent of the resolutions that they pass.