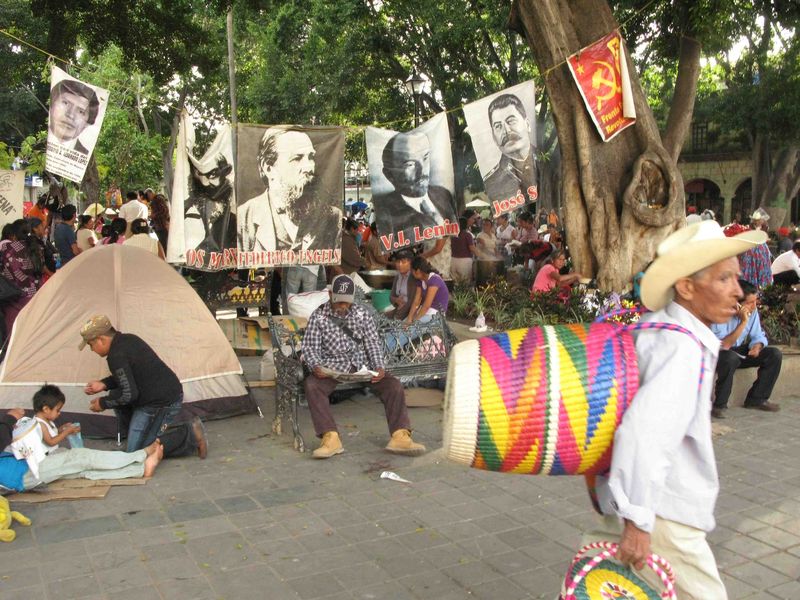 Oaxaca — In the tourist city of Oaxaca in this poor Southern Mexican state, teachers and a group of indigenous Triqui people are occupying the Zocalo.  The teachers are fighting education reforms that will privatize public schools, standardize curricula, and require all Mexican teachers to pass a standardized test or else lose their jobs. The Triquis are fighting for land and other rights.

A group of 30-50 Triquis are camping right in front of the governor’s office, directly behind the teachers.  Together, they take up the Southern edge of the square. In December, the day before Christmas, armed riot police broke up their encampment which had been in the square since October.  Now they are back again, and they have two walls plastered with photos of police equipped with guns, bayonets, and riot shields, clearly ready to attack a group of Triqui women and children. They are wearing long skirts and shawls and standing in a row facing the police while holding hands to make a human chain.

The teachers have a table with microphones set up on the gazebo ten feet in front of their information table. From 8:00 AM until 8:00 PM every day they give talks against the new law and explain how they would teach using a curriculum made by community members. What they want is a multilingual and multicultural curriculum, for the state of Oaxaca has 18 indigenous groups who speak 18 different languages.

Every day a different group of teachers and union members take the gazebo; teachers have come from all over the state to participate. They explain the conditions of the rural schools in which they teach. Many do not have good roofs nor walls and often there’s no electricity nor running water. Many children come to school hungry.  As one teacher says, “How can I teach computers in a school without electricity and teach English to a group of children who aren’t yet alphabetized in Spanish?”

From 6:00 PM to 8:00 PM there is live music, poetry, and students performing folk dances. On Tuesday night, a teacher from the nearby village of Etla played trova (protest) music on his guitar. His deep, clear voice rang out all over the square.  On Wednesday night,  a group of  12 and 13 year old girls wearing long embroidered skirts, white blouses, and holding  pineapples did a harvest dance.  “We want to show the richness of our state, how rich it is in culture and tradition” a union leader tells me. “The government wants to make every school teach the same thing, completely ignoring our indigenous roots.  Mexico is country with many languages and many traditions.”

At the end of day they often stand together and chant, right into the mic:

The press complains that these protests have affected local businesses – that the restaurants and cafes that line the East and West side of the square have lost business.  As I walk through the square in the morning and again at dusk, the outdoor tables are packed with Mexican and foreign tourists, the musicians play and the shoeshine boys shine shoes.  Everyone is busy with plenty of customers.

How have the Triqui people been able to stay in the square for almost five months and the teachers since the middle of January? Mexicans have the right to strike spelled out in their constitution, and that right includes the use of public spaces such as plazas, streets and government buildings.  What is not guaranteed is that everyone who began the strike will come out of it alive. For example, there are over 50,000 disappeared Mexicans, some of them teachers who had been involved in the 2006 occupation of the Zocalo. Sometimes, the police open fire though the protestors are unarmed.  More often, they will take someone prisoner, and the community never sees him or her again.

But today is Monday and the square is full.  And the struggle continues.