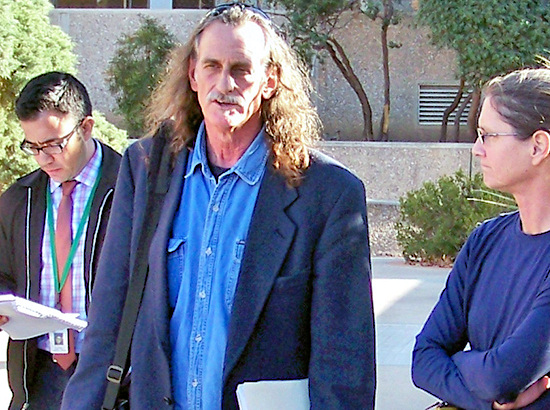 Brian Flagg has been an activist with Catholic Charities in Sacramento and Tucson, and with Casa Maria for upwards of thirty years. For the last year and a half he has been working with a mainly poor group of residents, the bus riders in Tucson and Pima County, to form a union to advocate for themselves. I met him as he was serving meals to people as they came to Casa Maria on Tucson’s South Side.

A little background is useful first. Mr. Flagg mentions the Pima County Interfaith Council. It is a socially active collection of faith-based communities, churches, synagogues, mosques and other socially minded organizations in Tucson and Pima County in Arizona. There is also mention of the Ronstadt Center. The Ronstadt Center is the central downtown bus transit point for Sun Tran, Tucson’s bus service. It is one of three bus transit centers in Tucson. Casa Maria has a free kitchen and other services for poor people of Tucson. The streetcar refers to a new streetcar in Tucson that will run from the University of Arizona to downtown and back, about a three mile route.

Joe Callahan: How did you start the Bus Riders Union?

Brian Flagg: At Casa Maria our emphasis is on this neighborhood here (on the south side of Tucson). A lot of the people in our neighborhood ride the bus. Working with the buses is organizing poor people basically. And then there’s what we learned from the Interfaith Council: when you need to have a broad base, you can’t just include Mexicans or Blacks or bus riders. You need to broaden that base in order to be effective and win. So the bus riders issue is perfect to organize around, totally a poor peoples’ issue.

You can really, really talk about the bus and transit and justice here at the soup kitchen. It goes over really well and is really close to home for a huge number of the people here. But the bus is also an environmental issue, and sometimes it’s a chance to work with environmentalists. It’s also about downtown, and it’s about gentrification and the streetcar. It’s like trying to find different constituencies and connect them around something so that poor and working people have more power.

Ultimately it’s about power. So the Bus Riders Union is the perfect thing to work on. Whenever the bus fares would go up, starting about five years ago, we’d get everybody and go downtown and scream and yell, and do the research and come up with the arguments, and bring lot and lots of people to fill the city council chamber. We mess with them, but we do it the nonviolent principles way. Starting about five years ago, we kept them from increasing fares. One time they raised bus fares, but we got less of an increase than they were originally planning.

JC: What would you say to people who say, “We need to clean up the Ronstadt Center because it’s dirty.”?

BF: The city lets things go to hell on purpose because the bureaucrats in the city are basically in league with developers, who are the real power of the city, the county, wherever. The trick is to get the elected officials — in this case the majority of them are Democrats — to work with us and have relationships with us and say, “Look, you’re with us, right?” Then they say “yes” and then we take on the bureaucrats. Bureaucrats aren’t used to having me walk into their office, or you, or the next ten guys in this line (pointing at the people picking up food) coming into their office and saying, “Hey, I have a problem.” They (the elected officials) work with bureaucrats, so our thing is to get worthless Democrats to not be worthless, and I think it’s possible. There’s still enough democracy left that you can make enough of them not worthless.

BF: Yeah, local is where it’s at. Anything that’s for poor people, they want it to look like shit. And they want the city council to use the word dysfunctional. It’s also a real conscious thing by the mainstream media. The media are bought and paid for, they work for the…

JC: Metaphorically 1%. Can you tell us what you’re currently addressing?

BF: The idea is to talk to bus riders, get them involved and ultimately take leadership. So the number one issue is probably, from the poor people’s point of view, about the fares, how much it costs to ride a bus.

Our five points are: don’t raise the fares; don’t cut the routes; the city should not give the bus system to the RTA (Regional Transportation Authority); don’t use bus money for the streetcar; and the fifth one is save the Ronstadt Center.

I would submit to you that the $200 million dollars wasted on the streetcar is not about transit, even though it’s transit money, that it’s really about gentrification. And what I mean by that is that the people who are really going to profit from that $200 million dollars put into the streetcar are people and interests that own property on or near that 3-mile line (streetcar) from the U of A to the downtown. So those guys are the enemy and we’re calling them out. And to them, Ronstadt is an extremely valuable piece of property. They want to take it and develop it, make it into a yuppie paradise, and just kick the poor people out of town. For years a bunch of moneyed interests downtown have wanted to get rid of Ronstadt. So the city and the bureaucrats are fine with having it not be state of the art, having it not be clean and good, because then people will look at it and see it’s bad and want to get rid of it.

We always quote Councilwoman Romero, who said the downtown should be for everyone, and we’re standing on that. We won’t stand for the idea that poor people, in this case bus riders, will be kicked out of downtown. So that’s the basis of our struggle. We had a protest last October at the bus station, and it was attended by more than 100 people. Councilwoman Karin Uhlich spoke at it, and she was really strong. County Supervisor Richard Elias spoke at it, and he was really strong. After that the idea was basically that the Bus Riders Union is open to Ronstadt being changed, as long as the change is to make it more permanent, improve it in the eyes of bus riders, and to expand it. Karin Ulrich later told us that we should get all the stakeholders together — developers, the bus riders, bureaucrats, politicians, and downtown businesses and say, “Let’s think about the Ronstadt Center and what should it look like if and when there’s ever a move to develop it…”

With the bus riders being front and center, and at every meeting that we’ve had, we’ve made absolutely sure that we are there in numbers, that bus riders are loud and principled and advancing the cause. And a week ago, six out of seven council people stated in no uncertain terms that the Ronstadt center shall not be moved out of downtown or be diminished. Because the downtown business partnership put out a paper saying that we should diminish the center and have fewer buses going downtown, and it was soundly defeated by six out of seven council members. They also voted unanimously to have a process for 60 to 90 days to allow input from a variety of community members.

We’re definitely in the game. We’re not going to let Ronstadt be yuppified or let the bus riders get screwed in this process. The bus riders decided that we would do a forum on our terms and get whoever we can get to listen to the concerns of bus riders and put our position forward.

JC: That’s a model I liked with the Pima County Interfaith Council. They would speak and make the politicians listen.

BF: The city’s process is to have a bunch of bureaucrats babble at you and then, time for questions for ten minutes. And they control the floor if they even allow questions. That’s a losing game. But we have people power. Granted we don’t have a lot of money, but we’ve learned certain organizing tools that are important. The other thing is that we can’t let them use their power to balance the budget on the backs of poor people or bus riders. We can’t let our efforts take our focus off the city budget.

JC: Many people will say, “What’s wrong with moving Ronstadt just down the street?”

BF: Downtown needs to be for everyone. The city has used its money to enrich rich people. What serves bus riders needs to stay in place. The Ronstadt Center works; it deals with lots and lots of bus routes; it’s a real positive for people. Our message is you ain’t going to cleanse the downtown of poor people so that moneyed interests can make more money. It’s about transit justice. And it’s about putting a stick into the spokes of the wheel of government-supported gentrification of downtown.

JC: What are the next steps?

BF: There will be a survey, a questionnaire for bus riders downtown. Karin Uhlich is supposed to set up a meeting with bureaucrats. And the Bus Riders Union with be having a forum at the Rialto Theater in downtown Tucson on April 2 at 5:30 PM. We encourage all who can to show up and support the bus riders and fight the land grab by developers and the moneyed elites in Pima County.