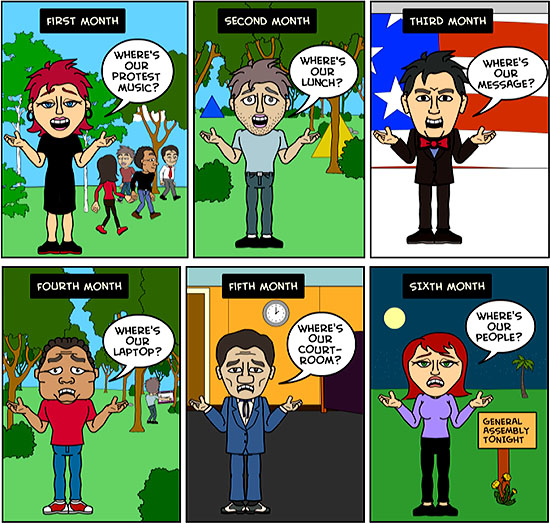 This comic reflects both our short history (so far) as well as some of the unwitting examples of privilege and lack of initiative I’ve witnessed throughout the various forms of occupations we’ve had here in Tucson.  On the very first day of our Occupation, we had 800 people show up full of excitement and hope and good intention.  But I noticed there was also a contingent of people who were full of complaints—where’s the “show”?   Where are the motivational speakers, the Woodie Guthrie music, the snacks, the tee-shirts?   Over the next few weeks, there were complaints about the kitchen not serving up meals on time or the coffee not being ready in the morning for campers.  REALLY, people?  It’s a Revolution.  Make your own damn coffee, and while you’re at it, if you see something that needs changing, then start a working group and make the change.  It’s really a reflection of who we are as a society — we are so used to instant gratification, passive entertainment and the tendency to complain to customer service when our needs and expectations aren’t met.

It’s sad, but I really think we lost a lot of potential supporters that first day because we didn’t have a big show.   Still, there were so many other people who came to protest and stayed because they saw the potential.   By the third month, after constant police harrasment and two police raids, our numbers dropped.    The courts threatened anyone who had multiple tickets with new charges, discouraging many of the hardcore campers who left out of fear of arrest.  Our Peacekeeping security force disbanded and the homeless moved in.  While we embraced them as 99 percenters, many also brought issues we weren’t prepared to deal with and by Month Four, theft, drugs, and fights were rampant.  Many of the hardcore Occupy Tucson members stopped coming to the park for General Assembly meetings because they felt unsafe.  Local media reveled in these setbacks, and our credibility suffered.

It’s time to set the record straight.   Occupy Tucson is still very much alive, even if you don’t see our tents and protestors standing on the street corners every day.   We have offices, plenty of very active working groups, and now this awesome publication!