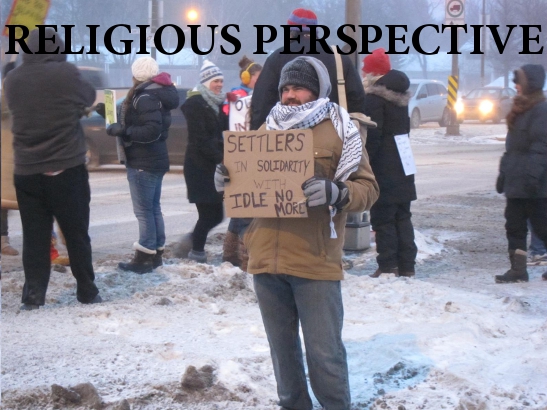 Winnipeg, Man. — It started with a few women in Saskatchewan. Now, it has spread across Canada and the U.S, all the way to France, New Zealand and Palestine. Idle No More is an indigenous ‘resistance’ movement supported by a broad range of non-indigenous people – including some Mennonites – who are saying the time has come to effect a deep change between First Nations and the Canadian nation-state.

Through round dances, teach-ins, protest rallies, and blockades, both old and young are peacefully declaring that all parts of our society need to take action to repair the broken relationships between indigenous peoples, settler society, and the land, bringing them all, at long last, to a place of living mutual respect.

Several federal bills, recently enacted or proposed, provided the added motivation for this most recent initiative to address demands for respectful dialogue and decision making. Bill C-45 (2012) contained a provision (as part of over 450 pages of revisions) to reduce environmental protection on an alleged 99% of Canada’s waterways. Consultation with indigenous peoples on such matters, as promised by past agreements and treaties, have not occurred, says the Idle No More movement. The proposed First Nations Private Property Act subverts predominant indigenous understandings of collective ownership, giving non-indigenous peoples the right to purchase property on indigenous reserves, potentially eroding native land base. The U.S. tried a similar but more heinous move back in the 1880s (the Dawes Act) with devastating impact on First Peoples. The U.S. Bureau of Indian Affairs eventually backtracked on Dawes.

Not surprisingly, Idle No More is polarizing the public. Wab Kinew is the Director of Indigenous Inclusion at the University of Winnipeg, a former CBC media personality, award winning journalist and music artist. He says the Idle No More movement is about “the recognition of treaty rights, the revitalization of indigenous cultures and an end to legislation imposed without meaningful consultation.” It’s about non-Indigenous society embracing the fact that, “We are all Treaty People.” It’s about taking responsibility as heirs of past colonial oppression, becoming informed of ongoing injustice, and honouring the nation to nation relationship that some of those first treaties signalled – a relationship that Section 35 of the Canadian constitution recognizes.

I believe the Idle No More movement is ultimately good for all Canadians. When one part of humanity is suffering, we all suffer. But when that most bruised and marginalized part is healed, we all do better. Both indigenous and non-indigenous peoples are damaged and in need of healing from this broken colonial legacy that none of us asked for, but which we all have inherited.

But let me approach this from another angle – a specifically gospel perspective. In his book God of the Oppressed, African-American theologian James Cone wrote that if Jesus was who he was – a marginalized Jew in occupied Palestine who lived for the dispossessed over-against the powers that be – then that’s who Jesus is today. Jesus isn’t like me – a White Mennonite born into a middle class suburb. Jesus is the Native kid born in the urban ghetto or the reserve that’s been clear-cut and colonized.

If my church was into icons, we’d have a picture of an indigenous Madonna suckling a brown child who would guide our way, a child who’d grow up to transgress boundaries of caste and class, exorcising, not Roman ‘legions,’ but Can-American demons from the body politic (Mark 5).

This is, from a faith perspective, why I and my faith community need Idle No More.

For the privileged white middle-class church, the good but difficult news is that to follow and be with Christ (and all that we perceive that truly human one to represent – God’s healing and hope, justice and peace) we must ‘do’ life with and alongside the oppressed. Remember that classic text in Matthew 25? “Whatever you do for those who have been cut off from the necessities of life – food, clothing, water – whatever you do for those who have been defrauded of land and sent to debtor’s prisons…you do for me” (my paraphrase). Jesus is clear. You’ll find him amongst those struggling to live, thirsting for justice, and resisting for God’s sake.

Dissident biblical memories like these not only suggest, but demand that the church be attentive to the voice and concerns of indigenous persons. They are the persecuted in this land. Without them we see only “through a glass darkly.” The horrific colonial realities that have caused the ‘Indian problem’ will remain obscured. Without our indigenous cousins we cannot work for just peace and strive towards reconciliation. Without them we cannot know the crucified God or be the church.

If the historic Jesus were here, would he join an Idle No More round dance? Would he be a good dancer – well practiced, embracing the spirit? As a Mennonite, I’m not a very good dancer – but I believe it’s time to dance. I hope the church can gather its collective courage, and do the right thing.

Steve Heinrichs is the Director of Indigenous Relations at Mennonite Church Canada.

The above is a 7.5 minute mini-documentary of an Idle No More action that took place at the intersection of Grant Ave. and Shaftesbury Blvd. on Jan. 11, 2013. The participants comprised mainly non-Indigenous people, number of Mennonites, and some indigenous persons.