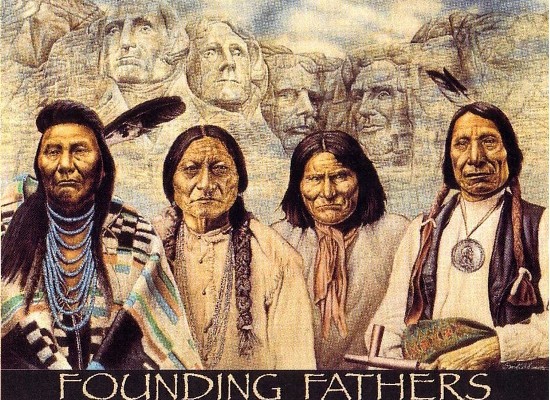 The United States is often considered the first modern democracy, bringing a new form of government that spread across the world. Approaching the 250th anniversary of Independence the US faces a mountain of debt, wars across the globe, an environmental crisis and more guided by its elected leaders whose powers are limited by law. While the US may not always live up to providing every citizen guaranteed rights, the idea of such a standard was largely unknown to European settlers. Despite what US schools often teach in American history; many of the ideas that inspired the founding fathers seem to come from Indigenous sources.

Ideas like Columbus discovered America or that Europeans were bringing civilization to the native tribes have often been pointed out as inconsistent with actual American history. The US congress has formally noted the contribution of Indigenous peoples to the ideas that shaped the formation of 13 colonies into the United States. Resolution 331 honors the contribution of the Iroquis confederacy to the constitution and the high admiration of its principals by men like George Washington and Benjamin Franklin.

The confederacy that founding fathers observed had many laws considered similar to those put forth in the constitution and the bill of rights. One example guarantees the new government will allow freedom to practice different religions “The rites and festivals of each nation shall remain undisturbed and shall continue as before”. Local communities would often choose delegates to send to councils “The people shall have the right to make appointments and to delegate their power to others of their number.” Two bodies of lords decide the business of nation, then a third body determines what happens when a dispute occurs or may disagree and send the matter back to the two groups of lords “All the business of the Five Nations Confederate Council shall be conducted by the two combined bodies of Confederate Lords”; Firekeepers, who shall render a decision as they see fit in case of a disagreement by the two bodies, or confirm the decisions of the two bodies if they are identical.

Prior to World War 2 and the Cold War the United States kept only a small standing army in peace time, if any. In the Federalist papers the founders tell us “the people of America may be said to have derived an hereditary impression of danger to liberty, from standing armies in time of peace.” The constitution was designed to require the legislature to continually debate the need for a standing army “legislature of the United States will be OBLIGED, by this provision, once at least in every two years, to deliberate upon the propriety of keeping a military force on foot; to come to a new resolution on the point; and to declare their sense of the matter, by a formal vote in the face of their constituents. They are not AT LIBERTY to vest in the executive department permanent funds for the support of an army” Similar provisions for preserving peace where held by the Iroquis confederacy; “When peace shall have been established by the termination of the war against a foreign nation, then the War Chief shall cause all the weapons of war to be taken from the nation. Then shall the Great Peace be established and that nation shall observe all the rules of the Great Peace for all time to come.”

Unlike the early United States, women had a bigger place in government. Women held a separate council, “The women of every clan of the Five Nations shall have a Council Fire ever burning in readiness for a council of the clan. When in their opinion it seems necessary for the interest of the people they shall hold a council and their decisions and recommendations shall be introduced before the Council of the Lords by the War Chief for its consideration”. Women also had power to pick candidates “The women will then select another of their sons as a candidate and the Lords shall elect him”

This form of Democratic government seems to go back hundreds of years before the United States formed. It still exists today in upstate New York holding council at what is known as the great Turtle Island. The tribes involved have survived over 500 years of colonization under what is known as the Doctrine of Discovery. Under this Doctrine Europeans discovered the lands and have rights to seize them forming the basis of colonization and federal Indian law in the US.

Many such ideas have been overturned such as Brown vs Education overturning the longstanding separate but equal policy. One step may have come in 1960 when the United Nations passed a declaration of de-colonization, which states a belief that “the process of liberation is irresistible and irreversible and that, in order to avoid serious crises, an end must be put to colonialism and all practices of segregation and discrimination associated therewith,”. More recently the United Nations passed the Declaration on the rights of Indigenous peoples which seems to provide rights to culture and land. The status of Indigenous peoples given differences between US and UN policy remains to be worked out. Some feel this is the time to dismantle the old policy based on a Doctrine of Discovery which was a fiction to begin with.

On Friday Apr 19th and Saturday Apr 20th a delegation from the confederacy travels to Phoenix for a conference with other leaders including Arizona’s O’otham and the O’dam of Mexico for the continental confederation of Indigenous Nations. They will be joined by non-indigenous groups such as the Unitarian Universalist association of Congregations as well as over 100 high school students from Phoenix Union High School District. The theme will be dismantling the Doctrine of Discovery. Together these groups may form an alliance dedicated to finding solutions to the environmental problems brought on by those who have despoiled the land and to address the root causes of racism against their people through terms like savage. The conference hopes to form a template for a curriculum in public schools to teach these principals.