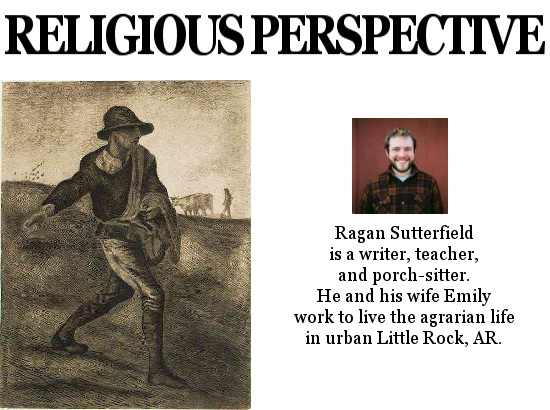 This is the text of a sermon delivered at St. Michael’s Episcopal Church in Little Rock, Arkansas on June 17th, 2012.

Not long ago I heard a story on the public radio program Living on Earth about clear cutting in Oregon. After each round of deforestation, logging companies like Weyerhaeuser fly planes and helicopters over the cuts and drop tons of herbicides on the cleared land to keep it open for the next generation of seedlings. Residents who live near the clear cuts are understandably worried about chemical drift and poisons settling into their water supply.

On the program, Terry Witt a representative for a logging industry trade group with the Orwellian name Oregonians for Food and Shelter, argued of course that the chemicals were no threat and that the aerial sprays were necessary because, “There’s a tremendous seed bank in the ground that when you disturb the soil the seeds start sprouting.”

In this last regard, what Witt said is true. Everywhere, from the bottom of lakes to the soils under the ice the arctic, there are seeds waiting in the ground for just the right conditions to sprout. To give an example, the common weed Lambs Quarters can remain viable in dormancy up to 1600 years. The seeds lay just below the surface waiting for just the right combination of light, favorable soil chemistry, and moisture to flourish. And with each seed that sprouts and matures, hundreds of new seeds are deposited for the next thousand years. You can see that attempts by logging companies to control these seed banks is futile. They must resort to what is essentially violence against the land, and thus people. At best, for all of their effort and destruction, the logging companies will be effective only for the span of months while these seeds work on the level of millennia.

I was reminded of these subterranean seed banks when I was discerning what it was Jesus was trying to express to his disciples in today’s Gospel.

But before we get directly into what Jesus says, we need to understand the questions Jesus was answering and who exactly was asking them.

Jesus’ audience was a crowd of peasants—fisherman, farmers, carpenters and masons. These people were tenants mostly—they had wealthy and powerful people they answered to, people who set the agenda, both religious and economic, that these peasants had to live under.

These peasants were not unlike modern farmers in Mozambique, where thousands of acres of land are being leased to multinational agricultural conglomerates out from under local small farmers. In one village, a company came in and took over forty square miles for cheap prices, and no doubt some bribes to the government, with promises to build a well and school. This area comprised the best agricultural land available—land that had once been the primary source of local livelihood. Now the locals are without the best land, the well has still not been drilled a year after the promise was made, and there is little hope that the situation will improve. These agricultural conglomerates are largely funded by Wall Street bankers, making sound investments no doubt, for our 401(k)s and IRAs.

We can feel the sense of injustice here, the futility of small farmers against the economic systems they are wrapped up in. Whether its farmers in Mozambique having their land leased to multinational corporations or indigenous Amazonians losing their native hunting grounds to oil companies or US farmers sued by Monsanto for the drift of genetically modified pollen into their fields—there are Powers and Principalities, evil forces, what Thomas Merton called the Unspeakable in the world that are perpetuating a counterfeit prosperity and abundance at the price of people and land and goodness.

To such an audience we have Jesus coming to announce that he is here to inaugurate a new kingdom—a kingdom where people will be able to build lives of goodness and flourishing without oppression and exploitation; where their work will be rewarded with abundance. Jesus has been going around the countryside, building up a band of followers among these peasants, who are ready to follow his lead and inaugurate a reign that will bring to earth the ideal Jewish Kingdom as described in Ezekiel 17. God we are told will make “high the low tree,” and “low the high tree”—meaning, like in the Magnificat, that God will “casts the mighty from their thrones and raise the lowly.”

These peasants have been listening to Jesus, they have been hearing about this kingdom, they are ready to become disciples and follow Jesus on this way toward a new reordering of society, but we can imagine the burning question that’s on the tip of all of their tongues—

When will the oppression end?

When will the mighty be brought from their thrones and the lowly exalted?

How is such a kingdom even possible?

Jesus’ answer comes in the parable’s we read today and it is essentially this. Who knows? We can’t predict when the conditions will be right for the seed to sprout. It could be fifty years. It could be a thousand. But what disciples are called to now—the sowing of seeds— is going to pay off one day. There will be a harvest and God will be there to gather the harvest when it comes. It doesn’t matter how small the seed we sow is, it can be as small as a mustard seed, and yet with a seed this small God can accomplish the coming of God’s shalom—God’s overwhelming peace and well being, represented here as in our Ezekiel reading by birds coming to nest. Why does God seem to care so much about birds nesting in these two passages? Birds have represented well being, God’s shalom, since Noah first sent out the doves from the Ark as a way to see if the world that had been reordered by God had returned to peace.

The seeds we are called to sow include justice, righteousness, an economy of abundance where everyone has what they need. Practically they are actions like a refusal to lie, an effort to divest our economic life from the forces of injustice, a dedication to curbing our desires for more and living a simple life of enough. Our greatest seed is the taking up of our crosses where we put to death those false selves Christ is calling us away from.

The world can try to dump all the herbicides it wants to keep these seeds from growing, but one day, little by little, the kingdom of God will sprout and flourish, creating a lush habitat where peace and justice can reign, where good work will be rewarded, and birds can nest and raise their young. Our work now is to grab a handful of seeds, and scatter them.