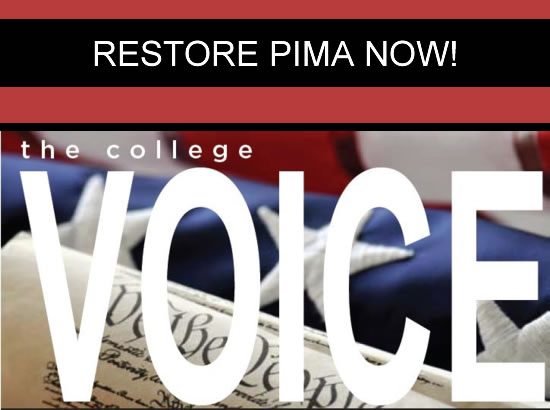 What began as early as 2004 when the PCCD Board of Governors coached then Chancellor Roy Flores on softening his administrative style has developed into a work environment so hostile that, even after Flores’ reign of terror ended amidst allegations of sexual harassment perpetrated by him and ignored by the Board, and threats of loss of accreditation, the culture of fear and intimidation endures.

Piling on the demands of every employee group at the college, pressure from civic and business leaders, a scathing report from the accrediting agency that has placed the college on probation, now students rise to demand that the remaining members of the Board Governors from Flores’ tenure step down to allow the institution to have a fresh start in hopes of becoming once again viable in service to their needs and those of the community.

The students invite members of the community to join them Wednesday, May 8 at 5:30 pm at University High School to march to the Board of Governors meeting to present them with petitions demanding their ouster. This may be the first major campaign initiated by student citizens of the PCCD to flex their political muscle in the community.

The student group is demanding that Governors Marty Cortez, Scott Stewart, Brenda Even and David Longoria step down immediately. They echo the demands of the faculty senate, the (non-teaching) Staff Council, the repeated calls of the Arizona Daily Star as well as the Coalition for Integrity, Respect and Responsibility (C-FAIRR).

C-FAIRR was one of two groups that, along with other individuals, initiated complaints in 2012 to the college’s accrediting body, the Higher Learning Commission (HLC). The other group was self-described as “Faculty and Staff at Pima Community College.” The HLC conducted an investigation into allegations, sending a fact finding team for an on-site visit in January, 2013 whose scathing report landed PCCD on two-year probation.

The report chronicles an environment within which several female victims who shunned unwanted advances of Flores were disciplined, demoted or transferred. Where “nearly all” employees “stated there was a culture of fear at the college” and “many individuals indicated that the culture did not disappear following the Former Chancellor’s resignation…”

The report details that “The Board was aware of the Former Chancellor’s unprofessional behavior as far back as 2004. At that time the concern was about his “tough” demeanor and his strong verbal language. The Board held “coaching sessions” for the Former Chancellor regarding the Board’s expectations that he “soften” his approach. Some of the leadership team indicated that he would appear to change his demeanor but that he would soon go back to his previous behavior. The Board never disciplined him for these actions.”

The report states that while the Interim Chancellors Cabinet “…expressed few concerns…” and no “…sense of urgency regarding the claims of the culture of fear and intimidation…,” Faculty leaders had “…presented information to the Board in 2007…” that showed 77% of Faculty surveyed felt they could not “…express their views openly without fear of recrimination.”

After detailing a litany of additional institutional failures including excessive turnover of administrative staff, arbitrary HR practices, questionable no-bid contracting, the administrations unilateral implementation of a new admissions policy which changed the “…makeup of the student body…,” effective suffocation of the Developmental Education program, and the Board’s failure to exercise its oversight duties, the report concludes with regard to the Board that:

“The institutional culture at PCCD was shrouded in the shadow of silence that was fostered through a pattern of protection created by members of the Board of Governors.”  They further concluded that the Board of Governors “…Failure to act quickly and with all due diligence on serious complaints against the institution’s CEO, lack of a structured review of its institutional policies and procedures, knowledge without action regarding the Former Chancellor’s inappropriate and unprofessional actions toward employees, failure to become aware of and to investigate an institutional sense of distrust and fear, and its general sense of being concerned more with fiscal outcomes than with the well being of its employees all delineate a Board which has become dysfunctional.”

For more information about the students exercise of their oversight responsibilities as citizens visit the Facebook Event Page for the Wednesday, May 8th march. To sign the petition demanding the board resign and to find even more information, click here.