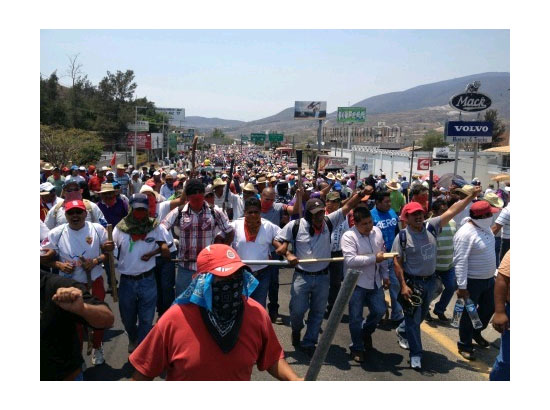 Obama last visited Mexico during the G-20 summit in Los Cabos last June. He and his entourage will touch down again today for talks with Mexico’s new president, Enrique Peña Nieto. Since his election, Peña Nieto’s team has worked to shift media focus away from violence related to the drug war and towards the economy, something that will likely be reinforced during this visit.

According to the New York Times, “In Mexico, Mr. Obama plans to meet with President Enrique Peña Nieto for talks that the Mexican foreign ministry said earlier ‘will cover competiveness [sic], education and innovation, along with border infrastructure, commerce, migration and citizen security among other subjects of shared interest.’”

Competitiveness is a preferred term that governments use today to talk about privatization and regulatory reforms designed to benefit the corporate sector. Previously, competitiveness was known as austerity, structural adjustment, or privatization, terms that have fallen out of favor due to the harsh consequences of these programs on the population at large.

So with respect to competitiveness, what might Obama and Peña Nieto discuss? Well, for one, Mexico recently changed their labor laws in order to “increase competitiveness,” pushing down minimum wage to about 60¢ an hour and making it more difficult for workers to receive social security and regular workweeks.

Pemex, Mexico’s state-owned oil firm, will definitely be a topic of conversation. According to the Financial Times, “an opening of Mexico’s highly protected oil sector, which is dominated by state behemoth Pemex, could provide untold opportunities for US oil companies as well as the sort of technology-transfer Mexico desperately needs.”

With all the talk of the gains to be achieved through privatizing Mexico’s oil sector, the fact that 99 percent of the state owned oil company’s profits go towards the federal budget, representing about 40 percent of the total national budget, will probably be sidestepped. Full privatization of Pemex would mean harsh austerity throughout the country.

In addition, the US funds something called the Mexico Competitiveness Program through the US Agency for International Development (USAID). According to the agency, “USAID is working with Mexican partners to improve economic governance and increase private sector competitiveness by improving the business enabling environment and by building sustainable support for continued policy reforms and systemic changes.” This means funding Mexican think tanks and non-governmental organizations to promote business friendly policies, privatization, and US backed reforms to the justice sector.

On December 11th, ten days after taking power, the Government of Mexico changed two articles of the Constitution, resulting in what they are calling an education reform. The focus on mandatory testing for all teachers has generated controversy, as, among other things, it makes teachers into increasingly precarious workers who can be fired for failing a test. “What was approved isn’t an education reform, rather a labor and administrative reform in disguise,” wrote columnist Luis Hernández Navarro in La Jornada. In the same column, Hernández maintained that the legislation opens the pathway to the privatization of the education system.

There has long been pressure from organizations like the International Monetary Fund (IMF) to change the education system in Mexico. In a December 2012 press release announcing the renewal of a $73 billion credit line for Mexico, the IMF called for reforms to the education system, among other things. Peña Nieto has already earned the admiration of the International Monetary Fund, whose leaders say they are “very impressed with President Peña Nieto’s structural reform agenda.”

Mass protests against the education reform have taken place across the country. On April 18th, a record 250,000 teachers, students, and their supporters are estimated to have marched in Guerrero against the reform and for free and public education.

The US corporate sector has a lot riding on innovation and education in Mexico. “With Mexico able to provide US companies with young, skilled and cheap labor, and with the US able to play a potentially crucial role in the transfer of technology and know-how to its southern neighbor, there is clearly plenty of room for the two administrations to push ahead with further economic integration,” according to a recent article in Financial Times. General Electric has an important center for research and design in Querétaro, which is fast becoming home to the country’s most important aerospace cluster. Engineers, 115,000 of which graduate in Mexico each year, are particularly sought after, as they can be hired here for less than $1,000 a month. This is a crucial element in Mexico’s ability to attract foreign direct investment in advanced manufacturing. According to data from Mexico’s Secretary of the Economy, the number of aerospace companies in Mexico rose from 61 to 249 between 2005 and 2011. Eighty-five percent of aerospace exports are to the United States.

Obama will likely promote the immigration reform bill that is before the US Senate. The bill comes in at over 800 pages, and places immigration squarely within the context of national security. There are positives and negatives to the proposal, which aims to ensure an adequate and flexible labor force in the US. While some workers may eventually achieve the “pathway to citizenship” offered through the reform, other prospective migrants will be directly impacted by its political tradeoff, an expanded border wall and even more militarization along the US’s southern border.

There’s a demand from the corporate sector to build new border crossings and expand existing ones between Mexico and the US. “Financially, investment in border crossings and infrastructure has not matched the exponential increase in trade crossing the border each year,” reads a December memo from the Council on Foreign Relations. This border infrastructure is necessary for the maquila (assembly) industry in Mexico to expand, and the US requires Mexico’s cooperation on these crossings, the construction of which amount to huge subsidies for the US and other corporations with operations along the US/Mexico border.

In terms of “citizen security” it is plain as day that violence in Mexico has risen in tandem with the implementation of the Merida Initiative, a US backed strategy militarizing the transshipment and production of narcotics. Over 120,000 people have been murdered and at least 27,000 disappeared since the beginning of the “drug war” in December, 2006.

Many of the dead and missing are migrants and “non-citizens,” Mexico has increasingly become one huge border for Central Americans, where the enforcers are not only immigration police but also the army and organized crime groups. It’s likely the presidential talks will skirt the ongoing violence in Mexico and focus more on police training and community programs, which are the supposed positive aspects of the Merida Initiative. Talking about the “drug war” probably the last thing Peña Nieto wants to do while sharing the spotlight with Obama.

Dawn Paley is a freelance journalist and independent researcher. See more of her work online at dawnpaley.ca.