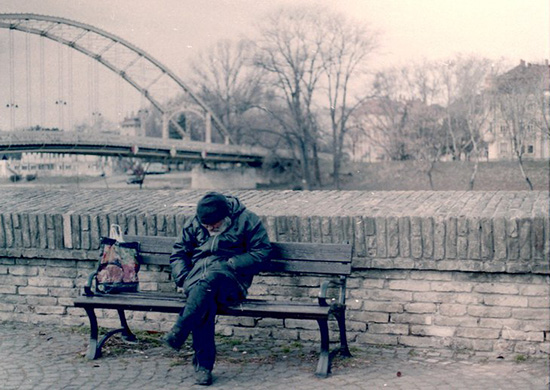 They stroll the hot side-walks
as the pavement sizzles
from the unwavering Sun.
Their survival means hope as their
bodies undergo never-ending
pounding of moving and shuffling
to keep from going insane,
grief deep as life or thought.
We see them often as microscopic,
and from a distance a faint light twinkles
in the depths of their hard black flat eyes
as bombs of misfortune drop around them 24/7,
from the open wounds of timeless dejection.
Thousands occupy combat-wearied minds
which has caused them to shut down.
Their government refuses to negotiate
a peaceful resolution
to end their madness.
The homeless have become a freak of war
wounded beyond repair.
They fall upon the thorns of life!
They bleed:
20,000 dead young and old,
15,000 tons of flesh,
25,000 gallons of blood,
920,000 years of life
that will never be lived,
and 50,000 children
who will never be born.
Societies limbs are shackled
to shameless/ hope, and the
streams of forethought stretch out in the distance.

© 1998 Bobby Burns—author of Shelter: One man’s journey from homelessness to hope