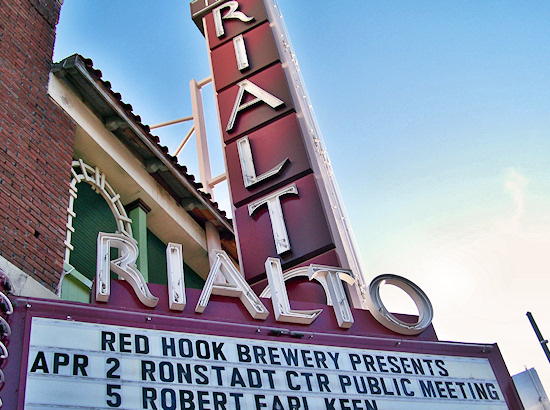 In a week in which City Councilmember Shirley Scott proposed a two million dollar cutback to Tucson public transit, she and others who are tempted to start dismantling our already inadequate public transit system would do well to remember the April 2nd “Community Vision for the Ronstadt Transit Center” event at The Rialto Theater. At the event, which was organized by the Tucson Bus Riders Union, some 350 people packed into the Rialto to speak out and to take the initiative in the city’s planned survey of what to do with the Ronstadt Center. Councilwoman Scott was not there, so we present the following photographic essay to give her some idea of the range and energy of the event, which featured everything from poetry to a detailed history of Tucson public transit, especially in the downtown. It concluded with an extended speak-out. The message of the whole event to public officials was perhaps best summarized by Billy Lolos of Occupy Tucson, who pointed out, regarding the idea that the Ronstadt Center might be developed into a “multiple use” space: “No one can serve two gods, the consumer one and the public service one, and the Ronstadt Center therefore can’t be made to serve both of these gods either.” For more details see Pamela Powers Hannley’s “Ronstadt Transit Center: City, Developers Ponder Proverbial Political Football” at Blog for Arizona.com.