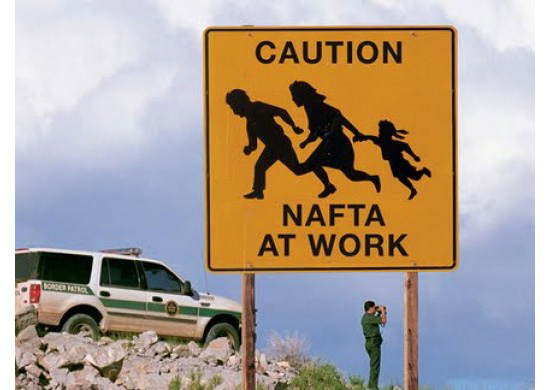 A Gang of Eight Senators on Capital Hill introduced an immigration reform bill to Congress on April 17. It has little chance of passing in the Republican House of Representatives, and even if it does, there is no magic formula of quotas, amnesty, pathways, or other regulations that will end illegal immigration to the United States. The U.S.-Mexico border has the largest economic disparity between two bordering nations in the world, and as long as immense poverty and lack of opportunity are highlights of Mexican economy, illegal immigration will continue.

Despite an official unemployment rate in March of only 4.5%, about 60 million Mexicans are living in poverty. That’s over 50% of a Mexican nation of around 117 million people. The reason unemployment is so low but poverty is so high is because Mexican wages have been stagnant for years, now approaching levels found in China. And the current minimum wage is $4.60 a day.

A series of ruling elites and foreign powers have worked in concert to create a highly stratified economy in Mexico. First, the hacienda system kept wages low and people landless throughout New Spain. This inequality continued after the Mexican elites overthrew Spain. The war with the United States in 1848 lead to economic turmoil and loss of land to the United States. After the war, the rule of Porfirio Diaz (1876-1910) saw a further concentration in large land holdings. Moreover, Diaz opened the Mexican markets up to U.S. imports and took on credit to help prop up the Mexican economy.

The competition from U.S. farms that were increasingly mechanized and thus some of the most productive in the world was too much for many Mexican farmers to withstand and many sold out and moved to the border. With the passage of the Chinese Exclusion Act In 1882, farm jobs once held by Chinese workers in California were now available, leading to an increase in Mexican immigration.

After the 1910 Mexican Revolution overthrew Diaz, there was some attempt at land reform in Mexico. However, the lure of jobs in the growing U.S. farm industry was too much for many people to resist as Mexico endured one of its worst economic recessions in its history. U.S. involvement in WWI and WWII brought more Mexican farm workers to the U.S. as the United States opened up the labor market to fill its agricultural needs. To aid the movement of farm labor, the U.S. and the Mexican government instituted the Bracero Program in 1942. Thousands of impoverished Mexicans abandoned their rural communities and headed north to work in U.S. farms.

The Bracero Program ended in 1964; however, there was a continued increase in Mexican immigration. In the 50s there were 229,811 immigrants from Mexico, in the 60s, 452,937 and the 70s, 640,294. Mexican immigration has increase each of the last four decades and has only recently slowed.

The major legislation passed to address the immigration situation between the United States and Mexico, the North American Free Trade Agreement (NAFTA), has failed. Supporters of NAFTA argued that it would stem immigration from Mexico. That was clearly not the case. Since its passage, Mexican immigration has more than doubled each year. In fact, the trade pact liberalization of Mexican grain markets displaced around two million Mexican farmers. With few jobs skills, many of them crossed the border to look for jobs in the states. Only now, according to the Pew Hispanic Center, has the sharp increase in Mexican immigration abated.

One of the big selling points of NAFTA was the creation of an industrial zone just inside the Mexican border to create jobs for Mexicans and to produce goods to be sold in the newly opened North American market. However, in these factories (maquiladoras), only 1.3 million jobs were created, not nearly enough make up for all the lost jobs in the agriculture sector. Moreover, the wages paid were only $7-9 a day, comparable to an hourly wage as a laborer in the U.S. And eventually, at least a third of the jobs in the maquiladoras moved to Central America and Asia where wages were even lower than in Mexico. The free market solution for immigration, NAFTA has clearly failed. In fact, it has only exacerbated the problem it was meant to fix by displacing rural communities and flooding the border with underpaid, desperate workers.

As long as the Mexican people are impoverished and desperate to feed themselves and their families, Mexican immigration will continue in large numbers. And, it will pick up again as soon as the U.S. economy improves. Instead of spending billions of dollars on border control, the money would be better spent improving the living standards of people in Mexico instead of continuing to exploit them.