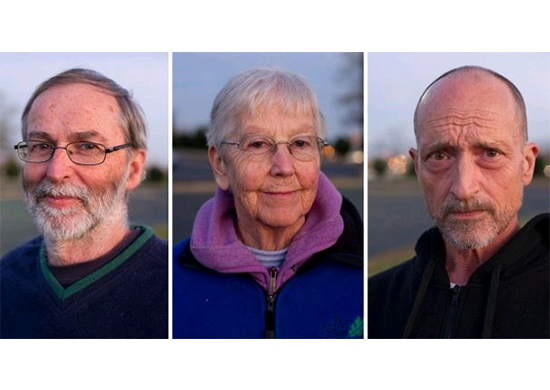 In just ten months, the United States managed to transform an 82 year-old Catholic nun and two pacifists from non-violent anti-nuclear peace protestors accused of misdemeanor trespassing into federal felons convicted of violent crimes of terrorism.  Now in jail awaiting sentencing for their acts at an Oak Ridge, TN nuclear weapons production facility, their story should chill every person concerned about dissent in the US.

Here is how it happened.

In the early morning hours of Saturday, July 28, 2012, long-time peace activists Sr. Megan Rice, 82, Greg Boertje-Obed, 57, and Michael Walli, 63, cut through the chain link fence surrounding the Oak Ridge Y-12 nuclear weapons production facility and trespassed onto the property.  Y-12, called the Fort Knox of the nuclear weapons industry, stores hundreds of metric tons of highly enriched uranium and works on every single one of the thousands of nuclear weapons maintained by the U.S.

“The truth will heal us and heal our planet, heal our diseases, which result from the disharmony of our planet caused by the worst weapons in the history of mankind, which should not exist.  For this we give our lives — for the truth about the terrible existence of these weapons.”
– Sr. Megan Rice

Describing themselves as the Transform Now Plowshares, the three came as non-violent protestors to symbolically disarm the weapons. They carried bibles, written statements, peace banners, spray paint, flower, candles, small baby bottles of blood, bread, hammers with biblical verses on them and wire cutters. Their intent was to follow the words of Isaiah 2:4: “They shall beat their swords into plowshares and their spears into pruning hooks; nation shall not lift up sword against nation, neither shall they learn war any more.”

In the dark, the three activists cut through a boundary fence which had signs stating “No Trespassing.”  The signs indicate that unauthorized entry, a misdemeanor, is punishable by up to 1 year in prison and a $100,000 fine.

No security arrived to confront them.

So the three climbed up a hill through heavy brush, crossed a road, and kept going until they saw the Highly Enriched Uranium Materials Facility (HEUMF) surrounded by three fences, lit up by blazing lights.

So they cut through the three fences, hung up their peace banners, and spray-painted peace slogans on the HEUMF.  Still no security arrived.  They began praying and sang songs like “Down by the Riverside” and “Peace is Flowing Like a River.”

When security finally arrived at about 4:30 am, the three surrendered peacefully, were arrested, and jailed.

The next Monday July 30, Rice, Boertje-Obed, and Walli were arraigned and charged with federal trespassing, a misdemeanor charge which carries a penalty of up to one year in jail.  Frank Munger, an award-winning journalist with the Knoxville News Sentinel, was the first to publicly wonder, “If unarmed protesters dressed in dark clothing could reach the plant’s core during the cover of dark, it raised questions about the plant’s security against more menacing intruders.”

On Wednesday August 1, all nuclear operations at Y-12 were ordered to be put on hold in order for the plant to focus on security.  The “security stand-down”  was ordered by security contractor in charge of Y-12, B&W Y-12 (a joint venture of the Babcock and Wilcox Company and Bechtel National Inc.) and supported by the National Nuclear Security Administration.

Sr. Megan Rice walked out of the jail and promptly admitted to gathered media that the three had indeed gone onto the property and taken action in protest of nuclear weapons.  “But we had to — we were doing it because we had to reveal the truth of the criminality which is there, that’s our obligation,” Rice said. She also challenged the entire nuclear weapons industry: “We have the power, and the love, and the strength and the courage to end it and transform the whole project, for which has been expended more than 7.2 trillion dollars,” she said. “The truth will heal us and heal our planet, heal our diseases, which result from the disharmony of our planet caused by the worst weapons in the history of mankind, which should not exist.  For this we give our lives — for the truth about the terrible existence of these weapons.”

Then the government began increasing the charges against the anti-nuclear peace protestors.

The day after the Magistrate ordered the release of Rice, Boertje-Obed, and Walli, a Department of Energy (DOE) agent swore out a federal criminal complaint against the three for damage to federal property, a felony punishable by zero to five years in prison, under 18 US Code Section 1363.

The DOE agent admitted the three carried a letter which stated, “We come to the Y-12 facility because our very humanity rejects the designs of nuclearism, empire and war.  Our faith in love and nonviolence encourages us to believe that our activity here is necessary; that we come to invite transformation, undo the past and present work of Y-12; disarm and end any further efforts to increase the Y-12 capacity for an economy and social structure based on war-making and empire-building.”

Now, Rice, Boertje-Obed, and Walli were facing one misdemeanor and one felony and up to six years in prison.

But the government did not stop there.  The next week, the charges were enlarged yet again.

Now they faced up to sixteen years in prison. And the actions of the protestors started to receive national and international attention.

On August 10, 2012, the New York Times ran a picture of Sr. Megan Rice on page one under the headline “The Nun Who Broke into the Nuclear Sanctum.”  Citing nuclear experts, the paper of record called their actions “the biggest security breach in the history of the nation’s atomic complex.”

At the end of August 2012, the Inspector General of the Department of Energy issued at comprehensive report on the security breakdown at Y-12.  Calling the peace activists trespassers, the report indicated that the three were able to get as far as they did because of “multiple system failures on several levels.” The cited failures included cameras broken for six months, ineptitude in responding to alarms, communication problems, and many other failures of the contractors and the federal monitors.  The report concluded that “Ironically, the Y-12 breach may have been an important “wake-up” call regarding the need to correct security issues at the site.”

On October 4, 2012, the defendants announced that they had been advised that, unless they pled guilty to at least one felony and the misdemeanor trespass charge, the U.S. would also charge them with sabotage against the U.S. government, a much more serious charge. Over 3000 people signed a petition to U.S. Attorney General Holder asking him not to charge them with sabotage.

But on December 4, 2012, the U.S. filed a new indictment of the protestors.  Count one was the promised new charge of sabotage.  Defendants were charged with intending to injure, interfere with, or obstruct the national defense of the United States and willful damage of national security premises in violation of 18 US Code 2155, punishable with up to 20 years in prison.  Counts two and three were the previous felony property damage charges, with potential prison terms of up to fifteen more years in prison.

Gone entirely was the original misdemeanor charge of trespass.  Now Rice, Boertje-Obed, and Walli faced up to thirty-five years in prison.

In a mere five months, government charges transformed them from misdemeanor trespassers to multiple felony saboteurs.

Rice, Boertje-Obed, and Walli argued against the motion. But, despite powerful testimony by former U.S. Attorney General Ramsey Clark, a declaration from an internationally renowned physician and others, the Court ruled against defendants.

Meanwhile, Congress was looking into the security breach, and media attention to the trial grew with a remarkable story in the Washington Post, with CNN coverage and AP and Reuters joining in.

The trial was held in Knoxville in early May 2013. The three peace activists were convicted on all counts.  Rice, Boertje-Obed, and Walli all took the stand, admitted what they had done, and explained why they did it.  The federal manager of Y-12 said the protestors had damaged the credibility of the site in the U.S. and globally and even claimed that their acts had an impact on nuclear deterrence.

As soon as the jury was dismissed, the government moved to jail the protestors because they had been convicted of “crimes of violence.” The government argued that cutting the fences and spray-painting slogans was property damage such as to constitute crimes of violence so the law obligated their incarceration pending sentencing.

The defense pointed out that Rice, Boertje-Obed, and Walli had remained free since their arrest without incident. The government attorneys argued that two of the protestors had violated their bail by going to a congressional hearing about the Y-12 security problems, an act that had been approved by their parole officers.

The three were immediately jailed.  In its decision affirming their incarceration pending their sentencing, the court ruled that both the sabotage and the damage to property convictions were defined by Congress as federal crimes of terrorism.  Since the charges carry potential sentences of ten years or more, the Court ruled there was a strong presumption in favor of incarceration which was not outweighed by any unique circumstances that warranted their release pending sentencing.

These non-violent peace activists now sit in jail as federal prisoners, awaiting their sentencing on September 23, 2013.

In ten months, an 82 year old nun and two pacifists had been successfully transformed by the U.S. government from non-violent anti-nuclear peace protestors accused of misdemeanor trespassing into felons convicted of violent crimes of terrorism.

Fran Quigley is an Indianapolis attorney working on local and international poverty issues. His column appears in The Indianapolis Star every other Monday.