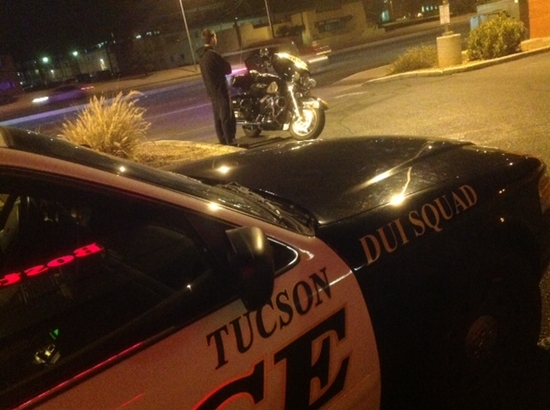 Some serious errors can be fatal while others just result in life-changing havoc. For Gavin Douglas, AKA Gadget to five grandkids, life as a master metal worker, sculptor, and driver is over. These days he can’t be counted on to even recall his grandchildren’s names.

“I think they just stereotyped him,” Mary Douglas, his wife of 45 years, says of Tucson Police Department (TPD) officers who arrested her husband in August 2011 after he plowed his truck into two parked cars and a utility pole.

He tested zero for blood alcohol content but his behavior was bizarre. Two months out of surgery for a broken hip and elbow, he admitted to prescription oxycodone use and spent the night in jail. Gavin Douglas, 64, was arraigned on DUI felony damage and central nervous system intoxicants charges.

His doctors say he instead needed to be in the hospital being evaluated and treated for stroke.

Months after the accident his urine test came back negative for oxycodone and positive for methamphetamine. The Sudafed he was taking for allergies is known to cause false positives for meth in urine tests.

For the record, I have known the Douglas family for decades. I would be first in line to stand up in court and say I know he was not abusing oxycodone or any other drug the evening of the accident.

Last November, Superior Court Judge Deborah Bernini dismissed charges against Gavin Douglas without prejudice, meaning they could be reinstated any time over the next seven years. The court agreed with the reports of two doctors that due to stroke he would be unable to defend himself in a court of law.

“The finding of [my] evaluation,” neuro-opthalmologist Dr. Wayne Bixenman wrote in a report cited to the court, “was that  . . . all of the behaviors observed by the police and listed on their report . . . are behaviors of a stroke victim.”

During the last ten years, Arizona’s Maricopa County Sheriff’s Office jail has become the premier site nationally and internationally for DRE training. Law enforcement personnel come from 30 countries as near as Canada and as far away as China to learn the steps to identify and make arrests for intoxicants other than alcohol. Ten percent of all Arizona DUI arrests are drug-related, the same as the national percentage.

Statewide, all peace officers are trained in conducting DUI investigations during their basic training at the police academy. Tucson’s police department supports about 25 DREs, eight of whom are part of an elite squad dedicated solely to drug and alcohol arrests.

Sergeant Chris Andreacola supervises TPD’s DUI squad. He is a dedicated law enforcement officer with 26 years experience. He admits “not all officers receive the same level of training” as his elite crew. But they all have the same responsibilities. DREs are called to DUI arrest and accident scenes when drug use is suspected. It appears the arresting DRE officer for Gavin Douglas was not part of TPD’s elite crew.

Troubling in Gavin Douglas’ case is that there was no protocol to screen for stroke noted in the police report. The officer clearly asks about diabetes but, according to the report, that is the extent of the medical screen.

Also troubling is the fact that in the 12 step training manual checklist document Sergeant Andreacola showed me, identifying medical conditions is not a designated step.

“If someone acting intoxicated tells you they ‘feel fine,’ that could be an indication of a medical issue.” The person “could be lying to you also.”

According to Sergeant Andreacola, “the Drug Evaluation and Classification Process is a systematic and standardized method of examining a subject to determine:

• Whether the subject is impaired by a drug or combination of drugs.

• If the impairment is resulting from an injury, illness, or is drug related.

• The category (or categories) of drugs that is (or are) the likely cause of the subject’s impairment.”

In the police report, Gavin Douglas, when asked, repeatedly assures the arresting officer by saying, “I feel fine.” Because the brain has no pain receptors that is always the case for stroke victims.

So how could the experts miss a stroke?

After reviewing the documents prepared for the court by two of his colleagues, Dr. Coull asked, “What direction was he traveling?” The truck was headed south and hit the cars to its right.

“This is consistent with Dr. Kligman’s [Evan W. Kligman, MD] finding of left occipital brain stroke,” Dr. Coull says. In such an event the right field of vision could suddenly disappear because, while the eyes function normally, the left brain no longer registers images to the right. It is probable Gavin Douglas could not even see the cars he hit.

Dr. Coull explains with proper treatment for ischemic stroke, the kind Gavin Douglas and 75% of stroke victims experience, “Six out of six improve compared to no treatment and of those six, one will fully recover.”

Getting to the hospital is crucial, first to determine if the stroke is the kind that will respond to medicine, and, second, to take advantage of the first few “golden hours” when treatment will be most effective.

Dr. Coull referred me to the Los Angeles Pre-Hospital Stroke Screening (LAPSS) protocol, a list of six questions adopted by many hospital emergency rooms that boasts close to 90% accuracy for stroke recognition. It is simple enough to for the minimally trained to use and available online. Basically, the assessment stresses if there is any doubt of stroke, the person needs hospital evaluation.

“Some officers are better than others,” he says. And, while “police have considerable discretionary powers” he suspects the department takes on liability when it trains personnel to recognize medical conditions. “That opens the door to civil sanction.” Barnard notes it is the department and not the individual officer who assumes responsibility.

Mary Douglas decided not to bring a claim against the city. A court could well find that police officers are not to be held to the same standards as medical personnel. Still, had she been given more and better information at the time of the accident, Mary Douglas would have known that she could have dialed 911 and asked for a second evaluation from an EMT. Police at the scene would have had to follow a hospital referral from an EMT.

The Douglas family hopes that in sharing their story no one else repeats their experience. Their 18 months spent living under threat from false drug charges while dealing with Gavin Douglas’ increasing disability became a financial and emotional drain on the family.

Until there is a sure-fire recognition test for the uncommon stroke-while-driving, the best the public can hope for is that police assume additional training for stroke recognition and default to hospital over jail when in doubt.

Is anyone prepared to have their parent or grandparent be the next stroke victim charged with DUI?