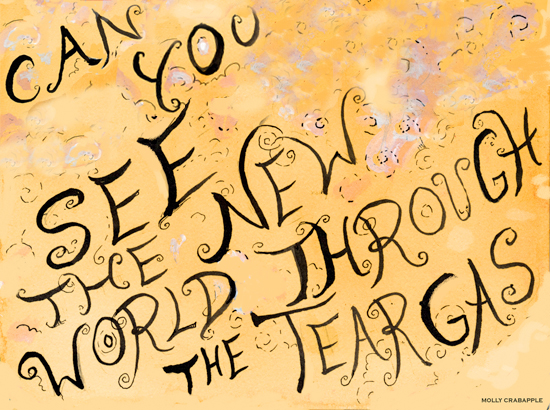 We hope others will be inspired to submit their own works of fiction and nonfiction by sharing this heady, Occupy inspired piece of creative meta-nonfiction—Ed

In one of the more distant outposts of the empire’s homeland, the Occupiers finally rose up on the 29th day of the First Occupation. But here, already, our narrative stumbles over a problematic verb phrase – the Occupiers were horizontally inclined, after all, and “to rise-up” suggests a verticality that is not characteristic of them.

So should we instead say that they “spread out”? Perhaps not, since this is exactly what earlier, very problematic occupiers (and note here the lower case) did, those who spread out and extended the borders of the empire without regard to those already living on the land.

And so it would appear we are left with the necessity of defining what we mean by “Occupy”. For though Occupiers everywhere, whether in the heart of the empire or on its most distant frontiers, did take over small parcels of land, these were symbolic acts. Acts that served as a conduit to the real Occupation, which occurred not in the parks of the empire, but in the minds of its people. Acts that allowed them to better understand where they existed in relation to others, why the world was the way it was, and, most importantly, what could be done to change it.

But with this clarification, our narrative would seem to lose that which makes it unique. For what should make this tale stand out from the multitude of tales that have been told of the other Occupations in the empire was its very remoteness, and that which could be used to accent this remoteness: poetic descriptions of how hot were the outpost’s summer days, for example, how cold its winter nights, and how blue were its skies as they stretched over vistas of cacti, creosote, and rocky hills.

So screw the narrative. What is important is that because of Occupy the outpost found itself one with the center of the empire, and the empire found itself no longer an empire, but a part of the world.