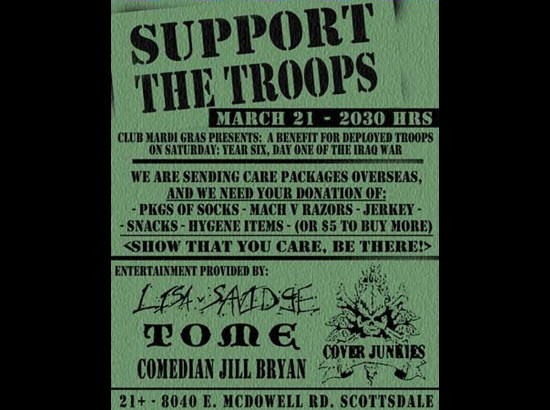 The suicide on June 10 of producer and singer/guitarist Daniel Somers of the Phoenix rock band Lisa Savidge has gained international attention due to the lengthy suicide note he left behind. In the note, Somers, a U.S. Army veteran from 2003 to 2006, described the suffering he has endured in the wake of his experiences in Iraq and the aftermath of his military career. His wife and family have given permission to publish it—Ed

I am sorry that it has come to this.

The fact is, for as long as I can remember my motivation for getting up every day has been so that you would not have to bury me. As things have continued to get worse, it has become clear that this alone is not a sufficient reason to carry on. The fact is, I am not getting better, I am not going to get better, and I will most certainly deteriorate further as time goes on. From a logical standpoint, it is better to simply end things quickly and let any repercussions from that play out in the short term than to drag things out into the long term.

You will perhaps be sad for a time, but over time you will forget and begin to carry on. Far better that than to inflict my growing misery upon you for years and decades to come, dragging you down with me. It is because I love you that I can not do this to you. You will come to see that it is a far better thing as one day after another passes during which you do not have to worry about me or even give me a second thought. You will find that your world is better without me in it.

I really have been trying to hang on, for more than a decade now. Each day has been a testament to the extent to which I cared, suffering unspeakable horror as quietly as possible so that you could feel as though I was still here for you. In truth, I was nothing more than a prop, filling space so that my absence would not be noted. In truth, I have already been absent for a long, long time.

My body has become nothing but a cage, a source of pain and constant problems. The illness I have has caused me pain that not even the strongest medicines could dull, and there is no cure. All day, every day a screaming agony in every nerve ending in my body. It is nothing short of torture. My mind is a wasteland, filled with visions of incredible horror, unceasing depression, and crippling anxiety, even with all of the medications the doctors dare give. Simple things that everyone else takes for granted are nearly impossible for me. I can not laugh or cry. I can barely leave the house. I derive no pleasure from any activity. Everything simply comes down to passing time until I can sleep again. Now, to sleep forever seems to be the most merciful thing.

You must not blame yourself. The simple truth is this: During my first deployment, I was made to participate in things, the enormity of which is hard to describe. War crimes, crimes against humanity. Though I did not participate willingly, and made what I thought was my best effort to stop these events, there are some things that a person simply can not come back from. I take some pride in that, actually, as to move on in life after being part of such a thing would be the mark of a sociopath in my mind. These things go far beyond what most are even aware of.

To force me to do these things and then participate in the ensuing coverup is more than any government has the right to demand. Then, the same government has turned around and abandoned me. They offer no help, and actively block the pursuit of gaining outside help via their corrupt agents at the DEA. Any blame rests with them.

Beyond that, there are the host of physical illnesses that have struck me down again and again, for which they also offer no help. There might be some progress by now if they had not spent nearly twenty years denying the illness that I and so many others were exposed to. Further complicating matters is the repeated and severe brain injuries to which I was subjected, which they also seem to be expending no effort into understanding. What is known is that each of these should have been cause enough for immediate medical attention, which was not rendered.

Lastly, the DEA enters the picture again as they have now managed to create such a culture of fear in the medical community that doctors are too scared to even take the necessary steps to control the symptoms. All under the guise of a completely manufactured “overprescribing epidemic,” which stands in stark relief to all of the legitimate research, which shows the opposite to be true. Perhaps, with the right medication at the right doses, I could have bought a couple of decent years, but even that is too much to ask from a regime built upon the idea that suffering is noble and relief is just for the weak.

However, when the challenges facing a person are already so great that all but the weakest would give up, these extra factors are enough to push a person over the edge.

Is it any wonder then that the latest figures show 22 veterans killing themselves each day? That is more veterans than children killed at Sandy Hook, every single day. Where are the huge policy initiatives? Why isn’t the president standing with those families at the state of the union? Perhaps because we were not killed by a single lunatic, but rather by his own system of dehumanization, neglect, and indifference.

It leaves us to where all we have to look forward to is constant pain, misery, poverty, and dishonor. I assure you that, when the numbers do finally drop, it will merely be because those who were pushed the farthest are all already dead.

And for what? Bush’s religious lunacy? Cheney’s ever growing fortune and that of his corporate friends? Is this what we destroy lives for

Since then, I have tried everything to fill the void. I tried to move into a position of greater power and influence to try and right some of the wrongs. I deployed again, where I put a huge emphasis on saving lives. The fact of the matter, though, is that any new lives saved do not replace those who were murdered. It is an exercise in futility.

Then, I pursued replacing destruction with creation. For a time this provided a distraction, but it could not last. The fact is that any kind of ordinary life is an insult to those who died at my hand. How can I possibly go around like everyone else while the widows and orphans I created continue to struggle? If they could see me sitting here in suburbia, in my comfortable home working on some music project they would be outraged, and rightfully so.

I thought perhaps I could make some headway with this film project, maybe even directly appealing to those I had wronged and exposing a greater truth, but that is also now being taken away from me. I fear that, just as with everything else that requires the involvement of people who can not understand by virtue of never having been there, it is going to fall apart as careers get in the way.

The last thought that has occurred to me is one of some kind of final mission. It is true that I have found that I am capable of finding some kind of reprieve by doing things that are worthwhile on the scale of life and death. While it is a nice thought to consider doing some good with my skills, experience, and killer instinct, the truth is that it isn’t realistic. First, there are the logistics of financing and equipping my own operation, then there is the near certainty of a grisly death, international incidents, and being branded a terrorist in the media that would follow. What is really stopping me, though, is that I simply am too sick to be effective in the field anymore. That, too, has been taken from me.

Thus, I am left with basically nothing. Too trapped in a war to be at peace, too damaged to be at war. Abandoned by those who would take the easy route, and a liability to those who stick it out—and thus deserve better. So you see, not only am I better off dead, but the world is better without me in it

This is what brought me to my actual final mission. Not suicide, but a mercy killing. I know how to kill, and I know how to do it so that there is no pain whatsoever. It was quick, and I did not suffer. And above all, now I am free. I feel no more pain. I have no more nightmares or flashbacks or hallucinations. I am no longer constantly depressed or afraid or worried

I ask that you be happy for me for that. It is perhaps the best break I could have hoped for. Please accept this and be glad for me.